On the red carpets, on the big screen, through outfits made especially or chosen from the archives, in films dedicated to its founder or those made by Karl Lagerfeld himself, CHANEL has a natural partnership with cinema. 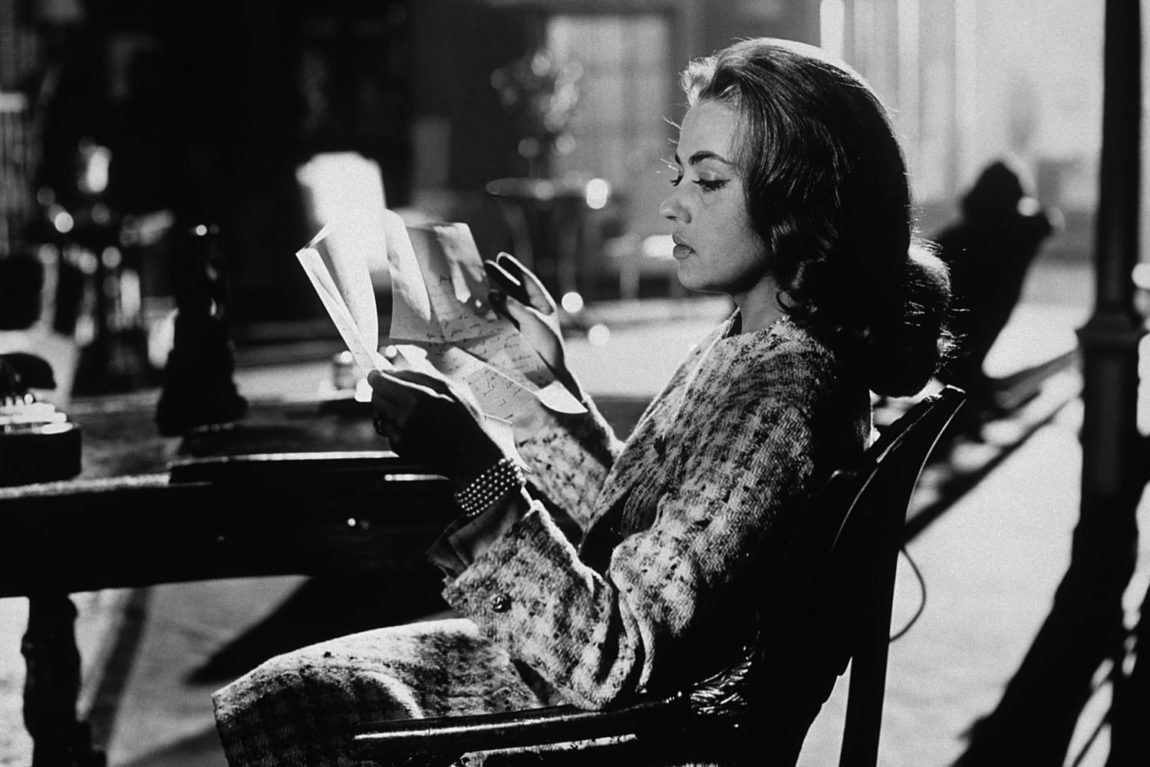 On the red carpets, on the big screen, through outfits made especially or chosen from the archives, in films dedicated to its founder or those made by Karl Lagerfeld himself, CHANEL has a natural partnership with cinema.

Close to many artists, Gabrielle Chanel came into contact with the world of cinema, its actresses and directors very early on. In Monte Carlo in the summer of 1930, through the Grand Duke Dimitri Pavlovich, she met Samuel Goldwyn, owner of the MGM studios. In a bid to relaunch the American film industry which had been at half-mast since Black Thursday of 1929 and to make cinema-goers dream again, the tycoon asked Gabrielle Chanel to transform his stars into fashion icons, both on screen and in real life. Gabrielle and her friend Misia Sert set off for America in 1931. After a stopover in New York in March 1931, she departed for Los Angeles onboard a specially chartered sumptuous white train. On her arrival she was met by Greta Garbo herself and newspapers ran the headline ″Two Queens Meet″. Marlene Dietrich, who would become one of her friends, Gloria Swanson, Erich von Stroheim, George Cukor, Claudette Colbert and other stars were also keen to meet her. This first trip to the USA was a triumph. ″It is a new chapter in my career that starts today,″ the designer confided to the Los Angeles Examiner on March 17th 1931. The experience was short lived – the studios didn’t appreciate the understated and refined style that was at odds with the Hollywood vision of glamour – but Gabrielle Chanel had discovered what a movie dress was along with the notion of photogénie, which she would forever integrate into her work as a couturière. 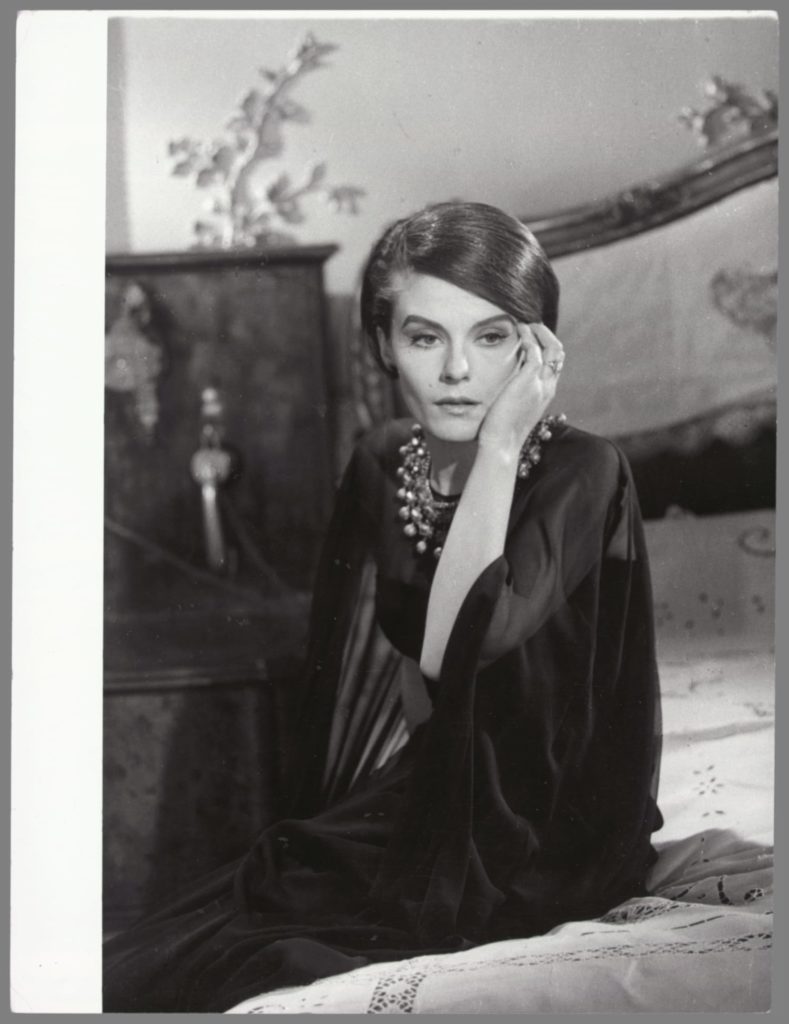 While Hollywood didn’t understand her style, French cinema on the other hand, listened to her like the Pythia. Gabrielle Chanel met with Michèle Morgan who was searching for a dress for Port of Shadows: ″a film like this doesn’t need a dress: a raincoat, a beret, that’s all!″ she decreed.1 History proved her right. Years later, at the request of her friend Luchino Visconti in 1961, she became Pygmalion to a very young Romy Schneider: ″When I put on my first ‘Chanel’, I realised I would never want anything else…(…) Chanel is a couturier like no other… Because it is a coherent, logical ′organised′ whole: in the way we say the Doric order or the Corinthian order, there is a ′Chanel order′, with its reasons, its rules, its rigour. It is an elegance that satisfies the mind even more than the eyes,″ enthused Romy, the most loyal of supporters of the House and its founder.2 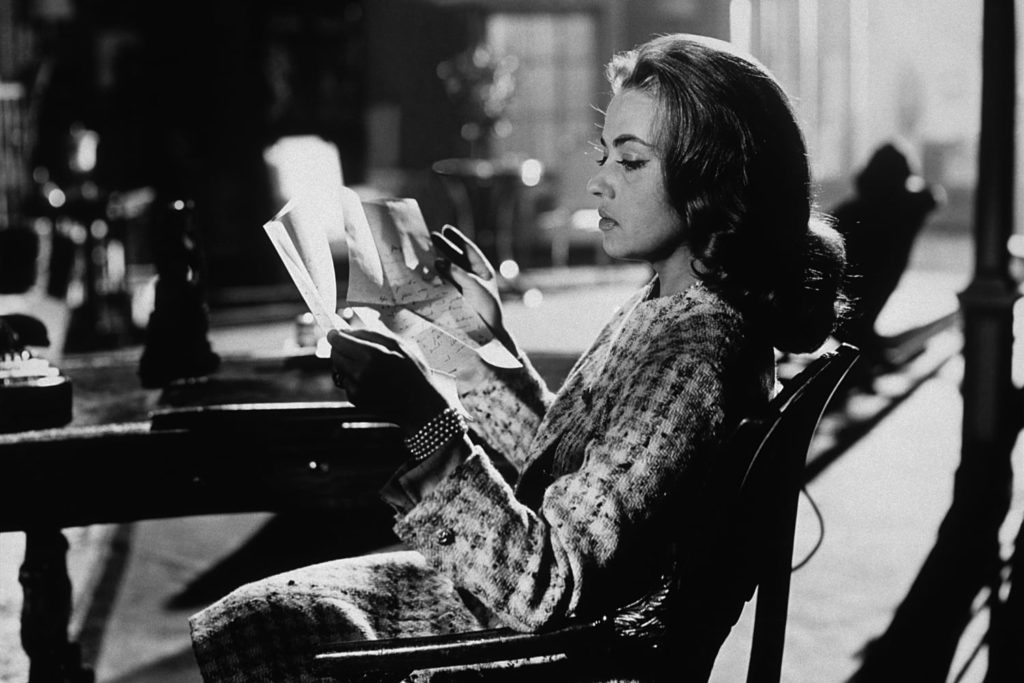 Avant-garde in every way, the CHANEL allure naturally found an echo in the films of the Nouvelle Vague. Its simplicity corresponded perfectly with the world of the emerging directors and their actresses, such as Jean Seberg who would wear creations by the House over several years. In 1960, Alain Resnais called upon CHANEL to dress Delphine Seyrig in Last Year at Marienbad. For the first time in the history of cinema, the costumes were not designed especially for the film but came from the CHANEL Haute Couture collections, opening the way for a new approach to costumes in films, more in line with reality. In 2018, CHANEL supported the restoration of Alain Resnais′ masterpiece, which was shown at the Mostra Venezia on September 5th.

Gabrielle Chanel made friends with Jeanne Moreau, Anouk Aimée, Anna Karina – who the designer re-baptised at the start of her career – Romy Schneider, Delphine Seyrig as well as Katharine Hepburn, Jean Renoir, Robert Bresson and Louis Malle. Karl Lagerfeld also wove deep friendships with numerous actresses and directors, from Stéphane Audran to Lily-Rose Depp, from Andy Warhol to Francis Veber, for whom he acted. Crazy about film, it was in the cinemas of the Latin Quarter that he perfected his French after arriving in Paris in 1952: ″films filled my life,″ he told Studio magazine in October 2007. And in 2015, he chose the Cinecittà studios as the backdrop for the Métiers d’art Paris in Rome collection. 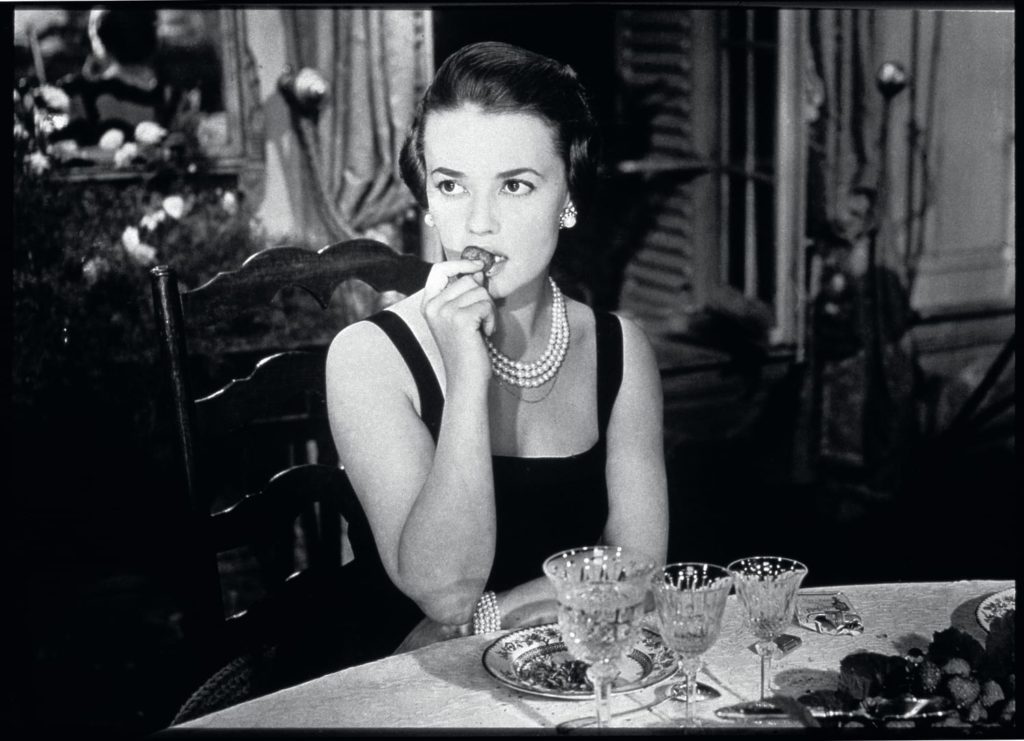 While he’d made costumes from the beginning of his career, the designer also understood very early on how much cinema can reinforce fashion’s message. In 1989, after his daughter Sofia had done an internship in the Studio alongside the designer, Francis Ford Coppola dressed his teenagers in New York Stories in CHANEL. The contrast between the age of the characters and the style of the House was perfect and further supported the image of youth that Karl Lagerfeld had been breathing life into since his arrival in 1983.

The modernity and timelessness of the CHANEL allure are conjugated in many other projects, including Pedro Almodóvar’s High Heels (1992) in which Victoria Abril wears a CHANEL suit from start to finish, and Callas Forever by Franco Zeffirelli (2002). A close friend of Gabrielle Chanel, having been introduced by Luchino Visconti, Zeffirelli found in Karl Lagerfeld the perfect ally to dress his actress Fanny Ardant. Rather than drawing from the archives, the designer offered to design all 22 of her outfits: ″I paid great attention to not copying a single garment that Maria Callas would normally wear. In fact, I would say I leant towards a modern, current style inspired by the reality.″ 3 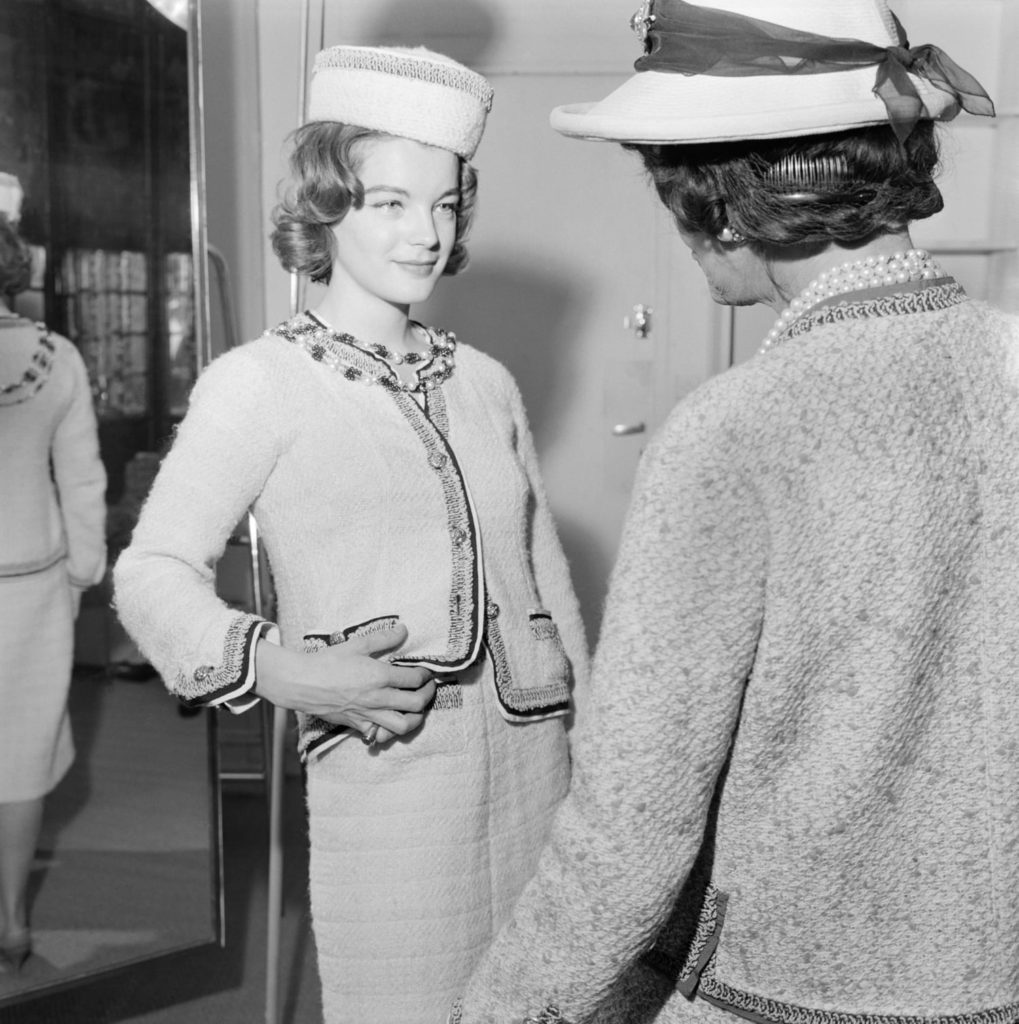 Carole Bouquet, Isabelle Huppert, Nicole Kidman, Vanessa Paradis and Anna Mouglalis (who played Mademoiselle in the 2009 film Coco Chanel & Igor Stravinsky), Diane Kruger, Keira Knightley, Penélope Cruz, Margot Robbie and Kristen Stewart all have established an exclusive friendship with Karl Lagerfeld, on screen and in real life, resulting in superb collaborations. In 2016, several outfits were created especially by the designer for Kristen Stewart and Blake Lively in Café Society; High Jewellery pieces were also lent for the occasion. In 2018, a suit from the Métiers d’art 2016/17 Paris Cosmopolite collection was made for Isabelle Huppert in the film Greta. And CHANEL naturally found its place with Margot Robbie, ambassador of the House, in Quentin Tarantino’s Once Upon a Time in Hollywood, released in 2019.

CHANEL jewellery also shimmers under the spotlights. Kristin Scott-Thomas illuminated her character in Gosford Park (2002) with the Fontaine necklace and earrings (re-editions of the 1932 High Jewellery collection ″Bijoux de Diamants″). Three years earlier in May 1999, as the Mistress of Ceremonies at the 52nd Cannes Film Festival, she wore the Géode necklace with a powder pink Haute Couture dress made especially by Karl Lagerfeld. To embody Cole Porter’s wife in De-Lovely (2004), Ashley Judd was adorned with the Deux Étoiles set of jewels, featuring Gabrielle Chanel’s fetish motif. Keira Knightley (face of the Coco Crush collection), chose other creations for Atonement (2008) and Anna Karenina (2012). Kristen Stewart, Chloë Grace Moretz and Juliette Binoche, dressed in CHANEL, also wore jewellery in Clouds of Sils Maria (2014), a film supported by the House.

CHANEL has always provided cinema with a just and modern illustration of women, in tune with everyday life and its era. This look, favoured by actresses immersing themselves in a role or walking down the red carpet, receiving an award or simply in daily life, is today interpreted by Virginie Viard. For her Spring-Summer 2020 collection, the Artistic Director of Fashion collections drew inspiration from the ambiance of the Nouvelle Vague and the liberated allure of its actresses. For the Métiers d’art 2019/20 Paris – 31 rue Cambon runway show, she entrusted the décor conception to the American director Sofia Coppola, a close friend of the House, who imagined a reconstruction of the legendary CHANEL address. Virginie Viard’s powerful and rigorous vision possesses both cinematographic photogénie and an attitude anchored in reality. Made as much for the big screen as for life, it is part of the spirit of CHANEL, ready to accompany the screenplays and their heroines.

Already a supporter of Revelations project at the Académie des César since 2018 and partner of the Deauville American Film Festival since 2019, CHANEL becomes, in 2021, the major patron of the Cinémathèque française for three years. This partnership is an opportunity for the House of CHANEL to reaffirm its close ties with the seventh art and its special relationships with certain film directors and actresses that were initiated by Gabrielle Chanel in the 1930s.