slide
grid
You can use keyboard arrows for sliding.
1
28 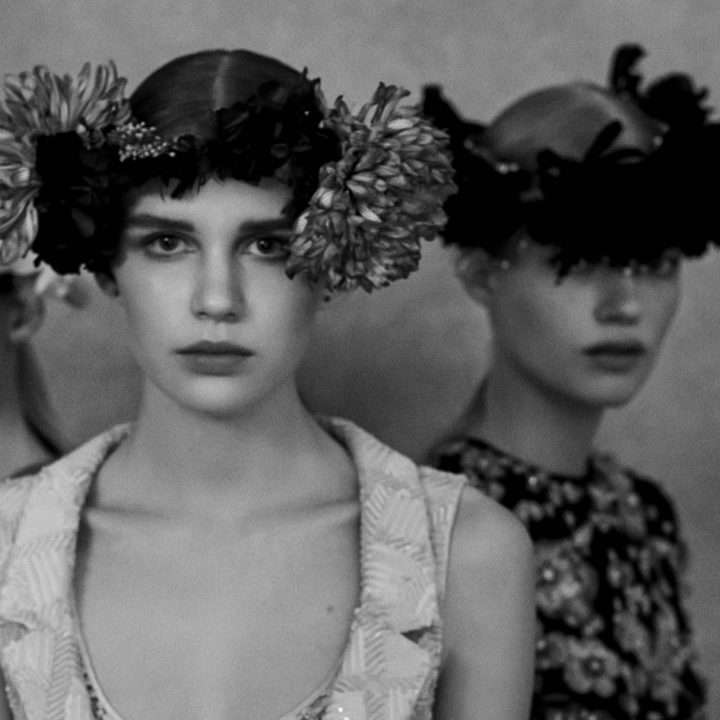 Celebrating the fascinating universe of the divinatory arts which Monsieur Dior was so fond of, the collection explores the symbolic magic and pluralistic beauty of the tarot cards cherished by Maria Grazia Chiuri.

C At the heart of the film Le Château du Tarot, directed by Italian filmmaker Matteo Garrone, the virtuoso creations by turns evoke the major arcana, manifest proof that couture remains the ultimate territory of experimentation and possibility. Notably, the High Priestess, Justice and the Fool are enhanced by an excellence of savoir-faire that reinvents the Dior dream, like the black velvet Bar jacket featuring revisited curves; embodying a new attitude defying the boundaries of masculine and feminine. A marvelous tale, and a veritable initiatory journey at the crossroads of enchantment and audacity.

Having asked Matteo Garrone to direct a film dedicated to her fall-winter 2020-2021 haute couture collection, the Creative Director wished to prolong this captivating collaboration. Being unable to stage a runway show opens up new alternatives for the imagination, among them the opportunity to showcase fashion through the seventh art and its ability to recapture creative magic.

Le Château du Tarot, the extraordinary fruit of this virtuoso new dialogue between Matteo Garrone and Maria Grazia Chiuri, unveils and celebrates the spring-summer 2021 haute couture collection. The splendor of the Tarot – as illuminated in the 15th century by Bonifacio Bembo for the Duke of Milan – transposes, in cinematic language, the spirit of the Creative Director’s collection, which highlights the magical universe of an art Monsieur Dior loved dearly.

It opens with a fortuneteller inviting a curious yet skeptical young girl to pick a card. The card marks the beginning of a journey through a majestic castle, revealing a myriad possibilities in the form of characters representing the major arcana. The story’s protagonist embodies two distinct figures, symbolizing both the masculine and the feminine. She must overcome various tests and prevail over questions and temptations before becoming a synthesis capable of merging the qualities of both sexes. This mindful initiatory journey illustrates the recapturing of lost attributes, surpassing gender stereotypes. The castle is thus transformed into a labyrinth, a winding and illusory path. Temperance, the High Priestess, Justice and the Fool are figures of truth with divergent interpretations, but ultimately decisions, in magic as in life, are always the responsibility of the individual concerned. The final encounter is with the Nameless Arcana, a metaphor for rebirth, before the reappearance of the castle’s celestial vault, with labyrinth now reflecting a gateway. The adventure culminates at the center of this grandiose setting, like a homecoming.

In this narrative, every truth is a duality in a continuous game of to-and-fro. In a tale untouched by time, one must follow her (or his) own path: the divinatory reading.
The point of departure for this film was the Tarot deck illuminated in the 15th century by Bonifacio Bembo for the Duke of Milan. Matteo Garrone drew his inspiration primarily from the re-edition of the book, which features miniatures reproduced to scale and in the original edition’s original colors, veritable masterpieces wonderfully decorated with gold, enamel, and interlaced geometry and flora.
The castle of Sammezzano is the setting for the film Le Château du Tarot. Located in the Florence region, it has always been considered an emblem of orientalist architecture in Italy. Though it was built starting in the 17th century, its history dates back to Roman times. Previously chosen by Matteo Garrone for his film Tale of Tales (2015), this unique location has been a setting for numerous films since the 1970s, including Pier Paolo Pasolini’s Arabian Nights (1974).