slide
grid
You can use keyboard arrows for sliding.
1
32 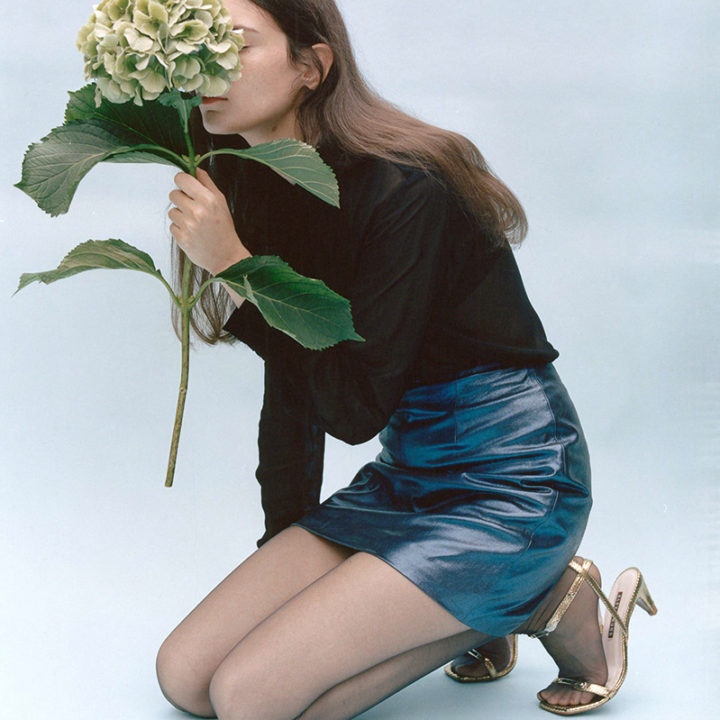 The CHANEL ambassadors Marion Cotillard, Penélope Cruz, Vanessa Paradis, Lily-Rose Depp and Alma Jodorowsky as well as the friends of the House Joana Preiss and Izïa Higelin were also photographed in this exceptional setting...

“I knew we couldn’t organise a big show, that we would have to invent something else, so I came up with the idea of a small cortege that would come down the stairs of the Grand Palais and pass beneath arches of flowers. Like a family celebration, a wedding…” says Virginie Viard setting the tone for the Spring-Summer 2021 Haute Couture collection. 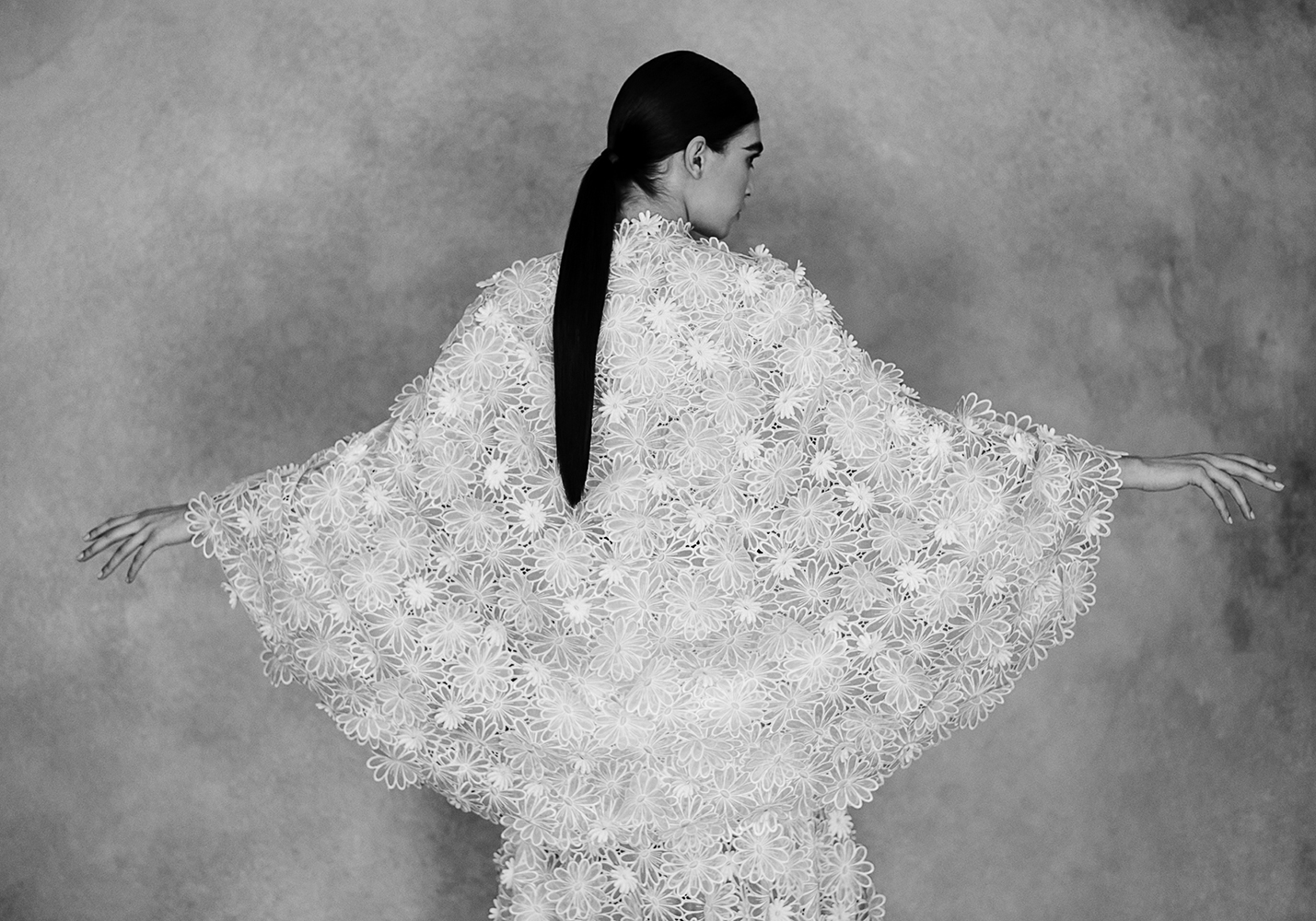 “I love big family reunions, when the generations all come together. It’s so warm. There’s this spirit at Chanel today. Because Chanel is also like a family.” A spirit to be celebrated more than ever with the reopening, at the same time, of the Haute Couture Salons at 31 rue Cambon, redecorated by Jacques Grange and inspired by the very feminine charm of the original salons imagined by Gabrielle Chanel, complete with her Coromandel screens and “wheat sheaves” tables by Goossens. At the foot of the mythical staircase swathed in mirrors, “I wanted to bring the models together for family photos, like those you can see in photo albums,” Virginie Viard continues. 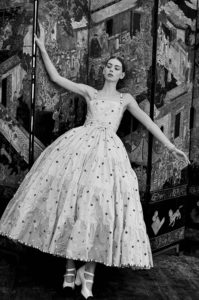 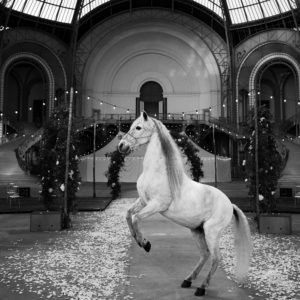 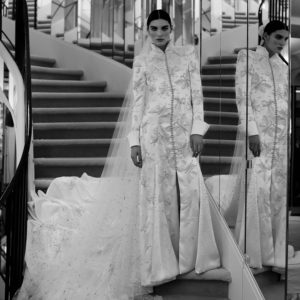 The bride might have just stepped out of a 1920s photo, with her veil, her long dress in ecru satin crêpe with a train, embroidered by Lesage with strass and pearl butterflies, plus a wing collar and shirt cuffs. The Dutch photographer, filmmaker and graphic designer Anton Corbijn photographed the collection in the Haute Couture Salons in the style of family portraits and also directed the film of the show at the Grand Palais. And as there is no party without music, the man who has designed so many album covers, also shot the teasers in the CHANEL Haute Couture ateliers with visuals in the style of band posters. His visuals representing CHANEL’s monogram and camellia are also featured on the printed show invitation and on the cover of the photo album. 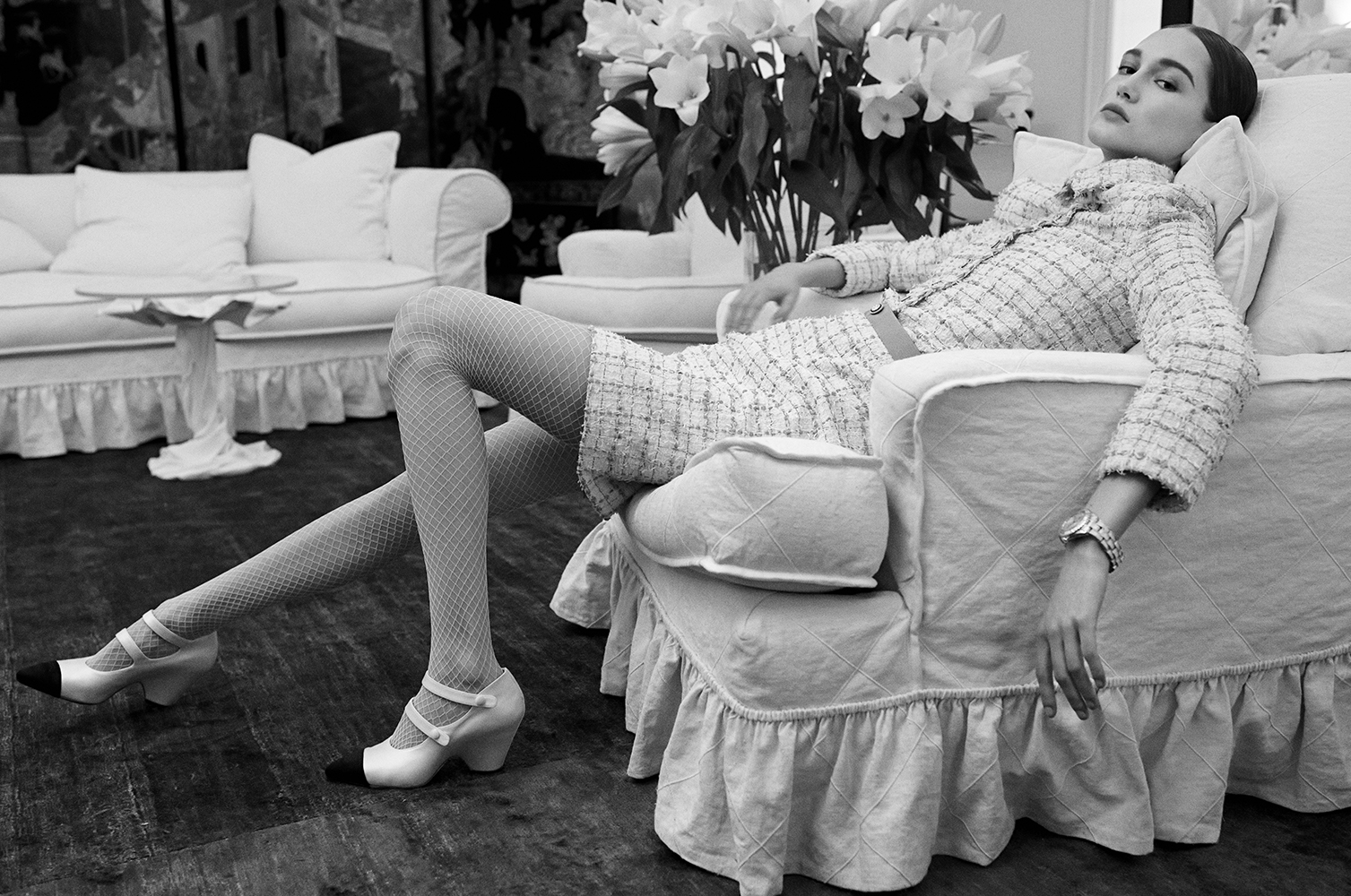 This idea of dance, of freedom and of summer evening parties is embodied by petticoats in motion, by the tiers of flounced crêpe georgette on a pale pink dress, accompanied by an entirely ruffled bolero, and two-tone Mary-Jane shoes with a double strap in the style of the shoes worn by tango dancers, or booties with wedge heels decorated with a fine golden quilt-like grid. A long removable skirt in lace made of white daisies, that liberates the legs, is worn open over a dress in the same lace with an integrated cape. The Maisons d’art, partners to the House of CHANEL, were involved in the collection’s thirty-two looks. The Montex Atelier made the embroidered macramé of a long dress in pearl grey tulle while delicate feathers by the House of Lemarié embellish the organza flounces of a little dress in black tweed. Movement is equally illustrated through the trouser suits whose jacket is inspired by men’s waistcoats. 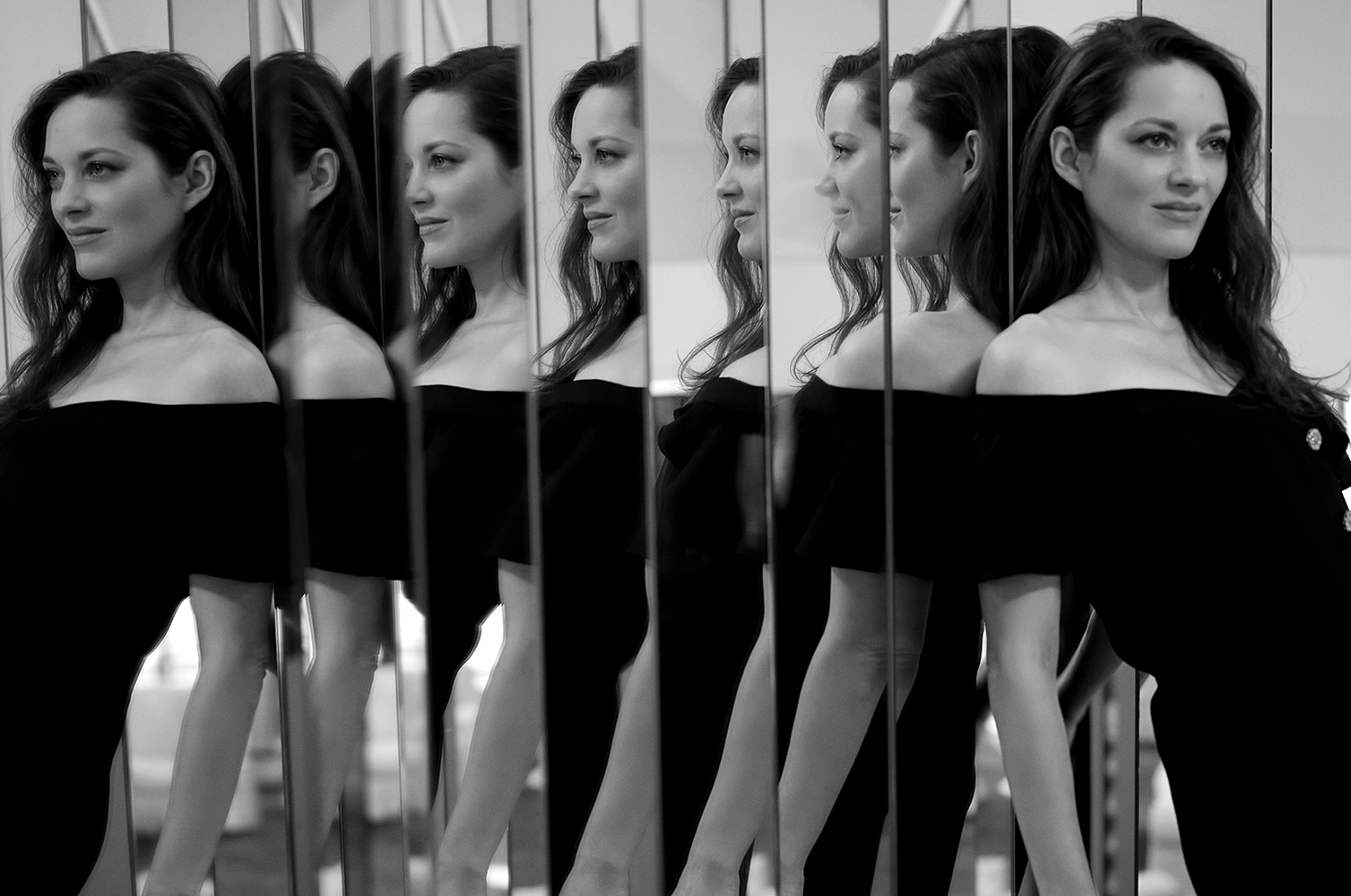 “I’m always thinking about what women would like to have in their wardrobe today,” concludes Virginie Viard.

For the CHANEL Spring-Summer 2021 Haute Couture show, Virginie Viard called upon photographer, filmmaker and graphic designer Anton Corbijn to stage the silhouettes of the collection in a series of “family portraits”, brought together in an album with a camellia on the cover, also painted by the Dutch artist. 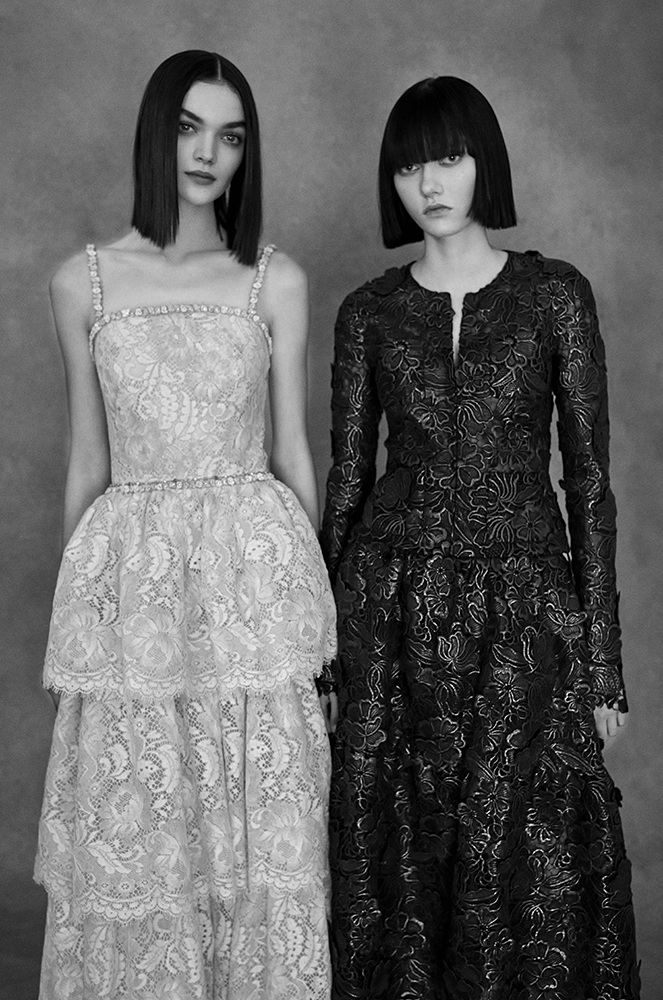 In these photographs, the models from the show pose in the heart of the new Haute Couture Salons at 31 rue Cambon in Paris, redecorated in the spirit of Gabrielle Chanel by the Parisian interior designer Jacques Grange, and inaugurated this month.

The CHANEL ambassadors Marion Cotillard, Penélope Cruz, Vanessa Paradis, Lily-Rose Depp and Alma Jodorowsky as well as the friends of the House Joana Preiss and Izïa Higelin were also photographed in this exceptional setting, dressed in creations from previous CHANEL collections. 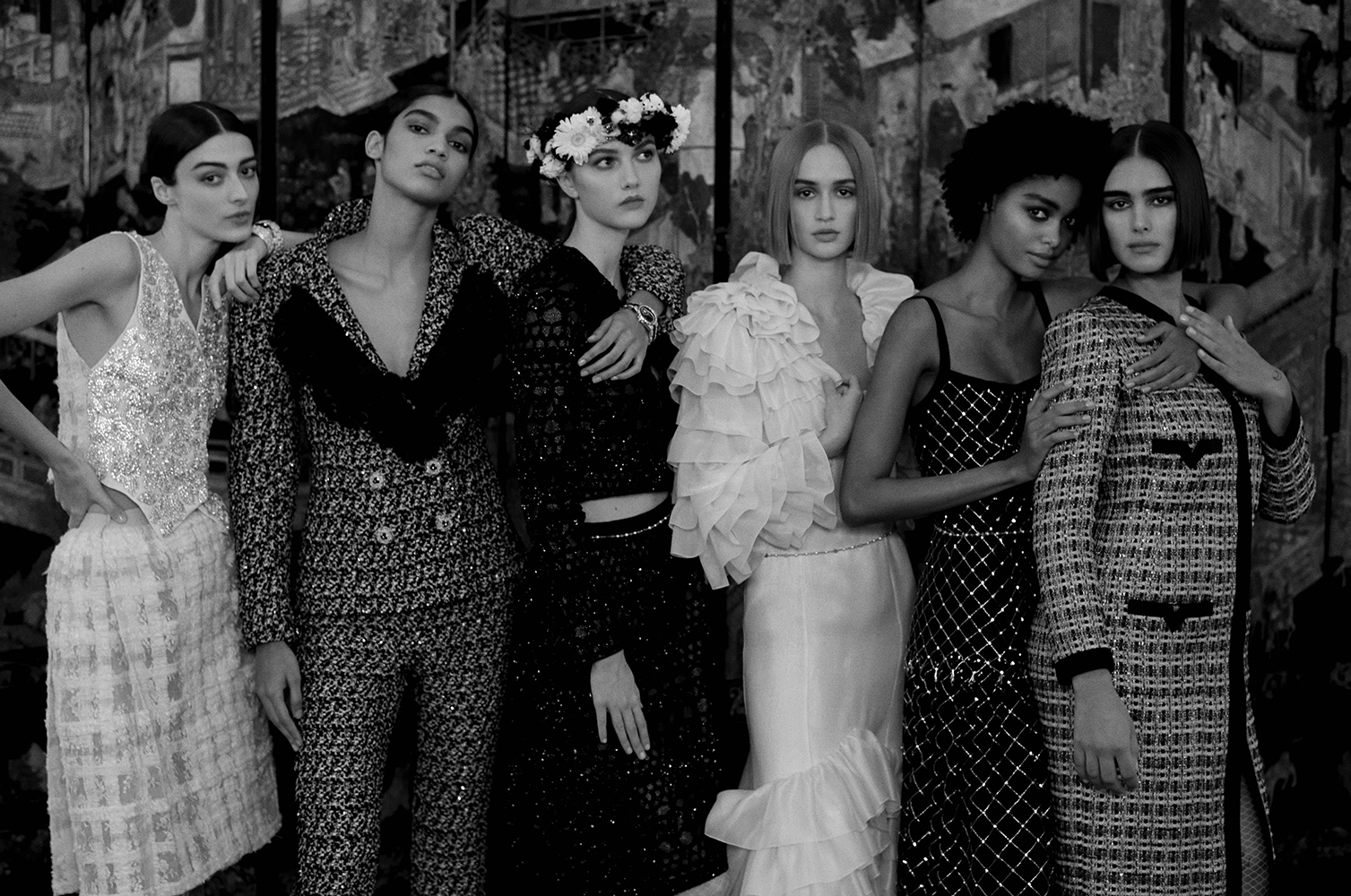