From 312 parts to the finished watch: insights production of the ODYSSEUS

From 312 parts to the finished watch: insights production of the ODYSSEUS

As with all of our watches, its newly developed self-winding movement calibre L155.1 DATOMATIC is lavishly finished by hand and assembled twice. 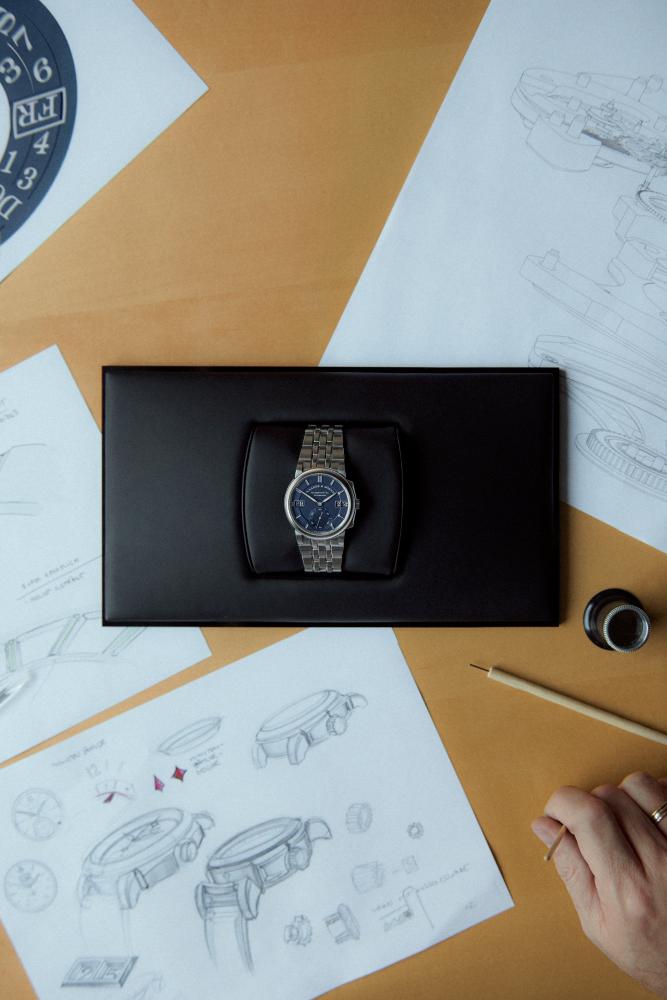 When crafting the ODYSSEUS, imeA. Lange & Söhne’s watchmakers work to an accuracy of one hundredth of a milltre. The self-winding movement consists of 312 different components and is assembled twice. The ODYSSEUS is A. Lange & Söhne’s first casually elegant timepiece. And it is also the first Lange watch with a water-resistant stainless-steel case and a screw-down crown tested to a pressure of 12 bar. As with all of our watches, its newly developed self-winding movement calibre L155.1 DATOMATIC is lavishly finished by hand and assembled twice. 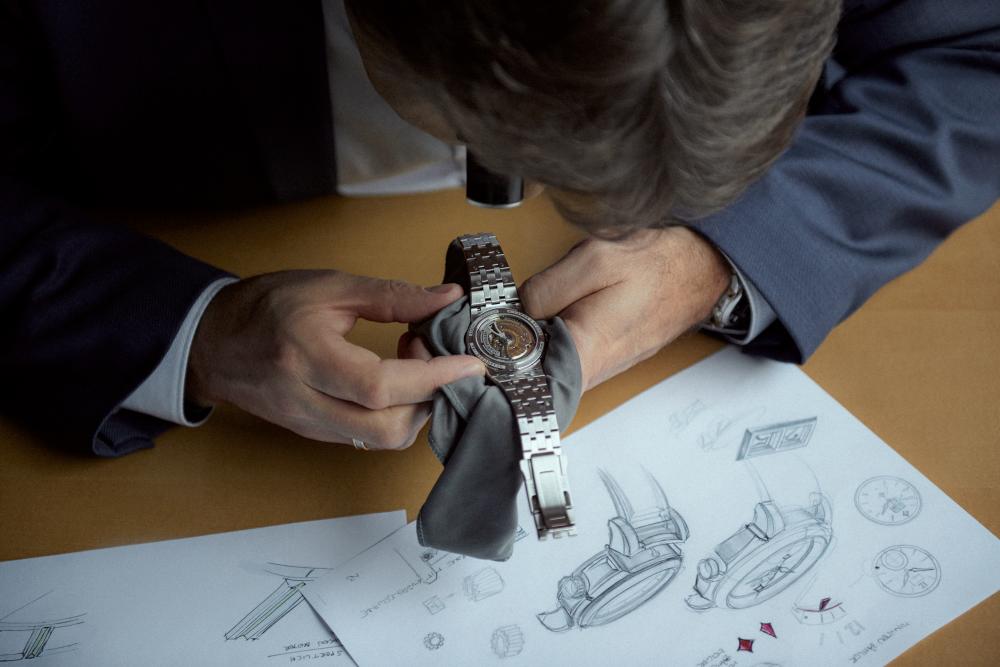 From the vision to the finished watch
Several years elapse from the first idea of Lange’s product developers to the completion of a prototype. With each new model, their ultimate goal is to create a watch that is unique and recognisable as a “genuine Lange”.
The first conceptual deliberations concerning the ODYSSEUS model date back more than ten years. Work on the final version started in 2015. The Lange research and development team, consisting of developers, product designers, engineers, technicians and prototype makers, invested considerable passion and attention to details to convert a vision into a masterpiece.

Artisanal finissage
Even though many parts of the movement are concealed beneath the three-quarter plate and are thus not visible to the owner, nearly every individual part is finished by hand. Various techniques are used in this process. Round parts such as wheels or the mainspring barrel are decorated with circular graining or solarisation. With the exception of the three-quarter plate, which features Glashütte ribbing on the side revealed by the sapphire-crystal caseback, all frame parts are decorated with perlage. Perlage is the name given to the small overlapping cloud-like circles produced with a rotating abrasive peg.
The contours of the frame parts are circumferentially brushed to achieve a matt surface that contrasts against the polished 45-degree chamfers along the edges. The acute angles of the internal corners represent a formidable challenge. Often, the surfaces of springs and levers are straight grained to create a fine structure of parallel lines. This finish is obtained by rubbing the workpiece on abrasive paper in the longitudinal direction. In contrast, flat polishing – which involves cautiously rubbing components on an extremely fine-grained diamond film – results in a mirror-like surface. 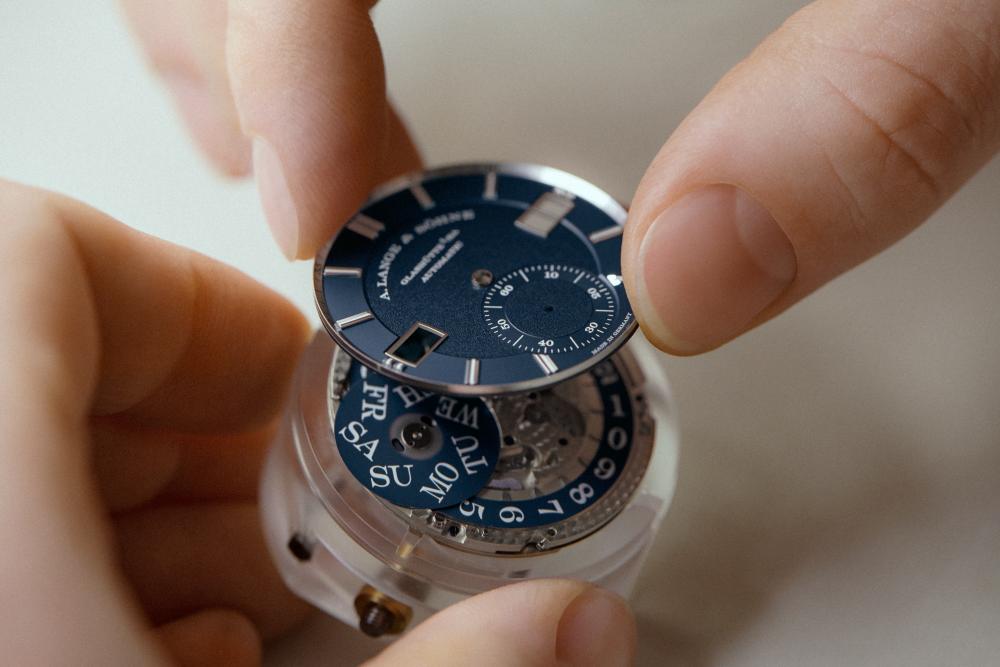 Manual engraving
Just like every watch from A. Lange & Söhne, each ODYSSEUS is unique. The engraving of the balance bridge is one tell-tale sign. Created especially for the new model family, the wave pattern is engraved by hand. It underscores the active use of the watch, for instance while swimming or sailing. And because engraving styles are like personal signatures, a loupe reveals tiny differences such as the dynamic of the waves and the depth of the cut. It depends on the force with which the engraver guides the burin.
The way the burin is guided and the tool itself influence the end result. This is why our engravers personally craft and grind their burins to adjust the handle and the length of the steel point for the best fit. Even years later, an engraver can still tell whether he or a colleague worked on a given movement part.

Double-checked is better – two-fold movement assembly
Like all Lange watches, the ODYSSEUS is assembled twice. Considerable dexterity is needed to perfectly fine-tune the interaction of all components. One reason for this time-consuming process is the three-quarter plate that was introduced by Ferdinand Adolph Lange in 1864. It assures greater precision because it stabilises the wheel train beneath a single bridge. As with all frame parts and bridges at A. Lange & Söhne, it consists of German silver, a highly sensitive material that is vulnerable to moisture and acids. Every fingerprint would leave behind indelible traces.
The complex initial assembly phase also includes the elaborate adjustment of the end play of the small wheels of different sizes. The jewels are moved up or down, sometimes by half a hundredth, sometimes by five hundredths of a millimetre, to achieve the end play defined for the respective wheel. In the process, the watchmaker must remove and refit the three-quarter plate several times to gradually optimise the end play for every wheel.
Once the movement has been assembled and tested, it is completely taken apart again. Then, the parts are cleaned. At this juncture, the three-quarter plate is endowed with Glashütte ribbing; in the ODYSSEUS, the stripes are somewhat broader than usual. To create space for the centrifugal mass of the rotor at the outer edge, the three-quarter plate is stepped. This step is decorated with perlage. Then, the second assembly pass takes place. 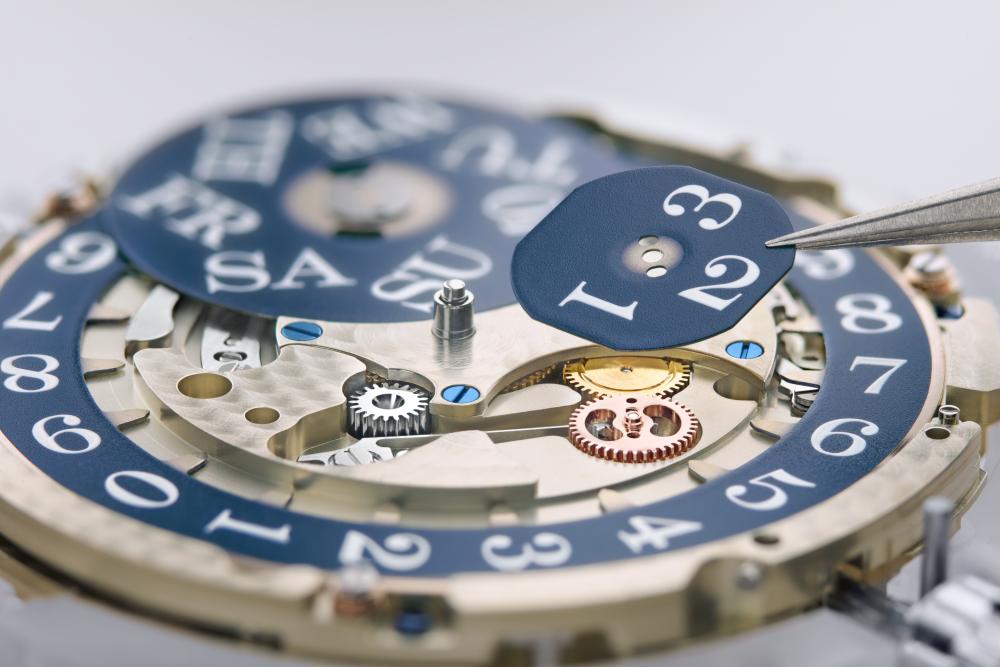 Lange calibre L155.1 DATOMATIC of the A. Lange & Söhne model ODYSSEUS: Assembly of the day-date mechanism on the dial side of the movement. The picture shows the assembly of the tens disc.

Large-format date-and-day mechanism
The ODYSSEUS is A. Lange & Söhne’s first watch to combine the typical Lange outsize date with a large-format day display. A new mechanism was developed for this purpose. It consists of 99 parts. It assures that both displays automatically advance every day at midnight. With the tapered buttons at 2 and 4 o’clock, both displays can also be manually incremented by one day at a time.
The special design of the mechanism makes it possible to switch both displays in either direction beyond the midnight position with the crown. While travelling for instance, the user can conveniently correct the time to the new time zone.
As in other Lange watches, the iconic Lange outsize date features a units ring and a tens disc. In the ODYSSEUS, however, the units ring is larger and printed with the numerals zero to nine twice. While the tens display is implemented with a cross in most Lange timepieces, the ODYSSEUS version is octagonal.
The image shows the assembly of the tens disc. Two tiny cloverleaf screws secure it to the tens wheel; they are tightened with a special screwdriver. Covered, but visible in the image, the goldplated tens intermediate wheel 3 is decorated with circular graining.

Beat adjustment
The precise adjustment of the beat is performed with an eccentric and a whiplash spring. To assure the accuracy and stable rate of the watch, it is important for the semi-oscillations of the balance to be symmetric. This is achieved with the precision beat adjustment system.
A screwdriver is used to move the eccentric on the hand-engraved bridge clockwise or anticlockwise, thus changing the position of the index pointer. The whiplash spring on the opposite side keeps the pointer in the correct position. 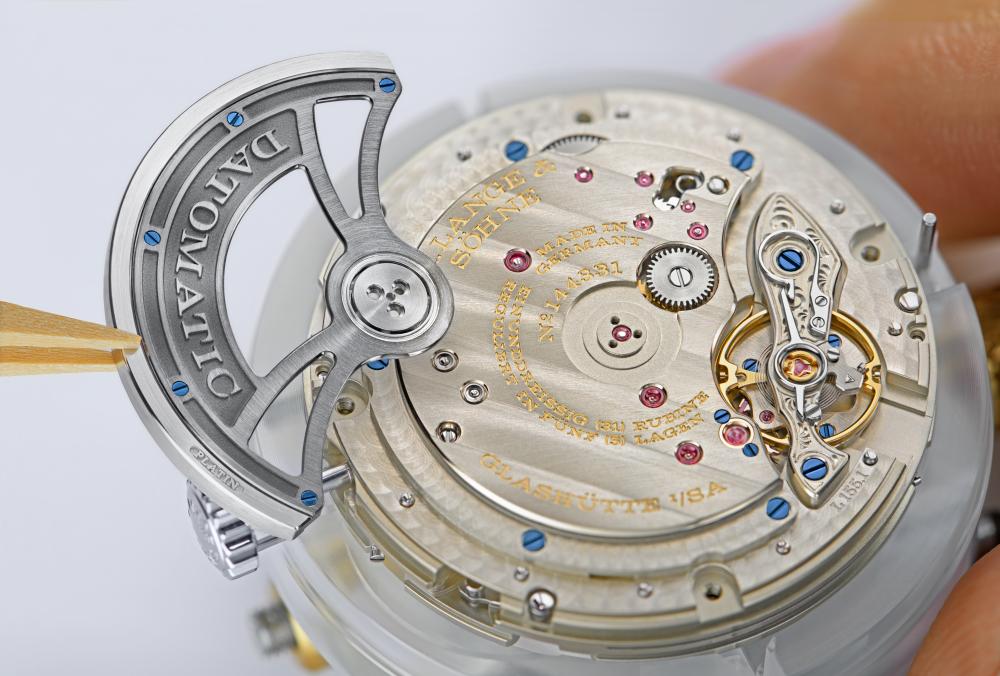 Lange calibre L155.1 DATOMATIC of the A. Lange & Söhne model ODYSSEUS: Assembly of the black-rhodium rotor on top of the three-quarter plate.

Assembly of the rotor
The rotor of the ODYSSEUS rotates in both directions and is winding unidirectional. In its bearing, seven ceramic balls minimise friction. The outer centrifugal mass of the rotor is made of platinum and secured with five blued steel screws. The material of the central segment is black-rhodiumed Arcap. Arcap is an ideal material for a rotor because it is flexible and stable even if it is thin. This part is black-rhodiumed for aesthetic reasons. Moreover, it is chamfered, circumferentially brushed, and decorated with circular graining.
As far as the movement is concerned, the assembly of the rotor is the last step for the watchmaker. It requires great caution because the galvanised surface is extremely sensitive.
The twelve small raised elements at the edge of the plate over which the platinum segment rotates are called banking pins. In the event of a blow, they support the rotor to prevent it from touching the plate, which would damage the hand-applied perlage on its surface.

Assembly of hands and dial, casing
The dial and the hands are fitted after the second assembly and comprehensive tests of the movement. Here, too, great caution is needed to prevent scratches. The polished hands are very sensitive, just like the brass dial with its four separately finished levels.
Then, the movement is integrated in the three-part stainless-steel case, after which the screwed caseback is secured. In the process, all seals are inspected and lubricated. Finally, the watch is tested for water resistance. The screw-down crown and the buttons are tested as well, including for ease of operation. And then, the stainless-steel bracelet is attached to the case.

check also: The Leap Year according to A.Lange & Soehne 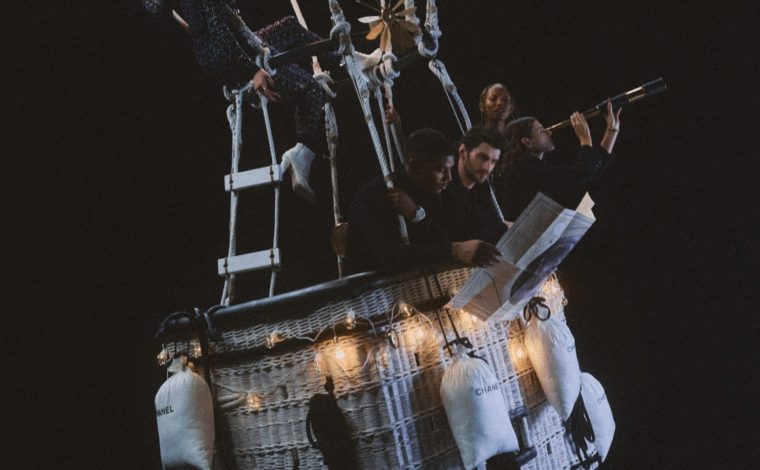