slide
grid
You can use keyboard arrows for sliding.
1
97 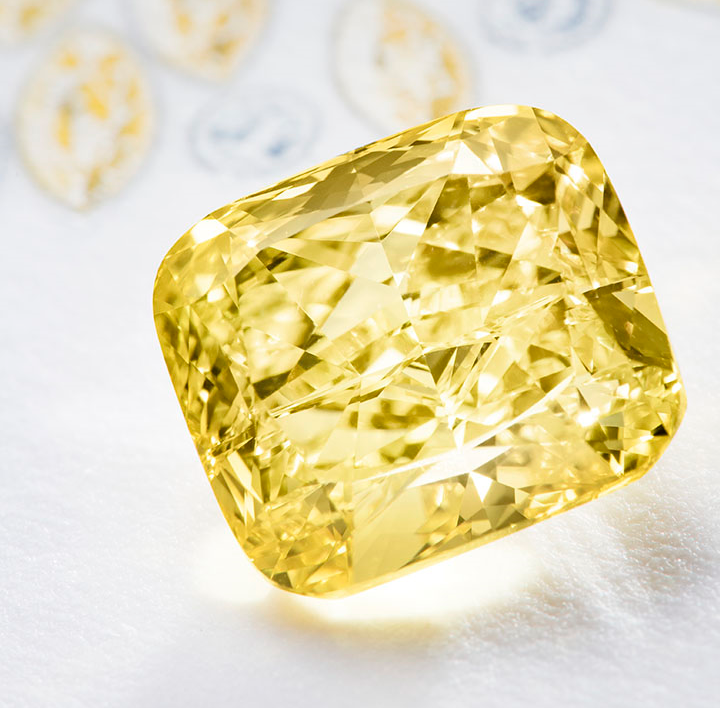 A perfume bottle stripped down to its essence, a little black dress, a braided trim suit that hugs the body with fluidity: Gabrielle Chanel seems to fit naturally into this group of rigorous modernists, partisans to the economy of means, for whom “ornamentation is a crime.” 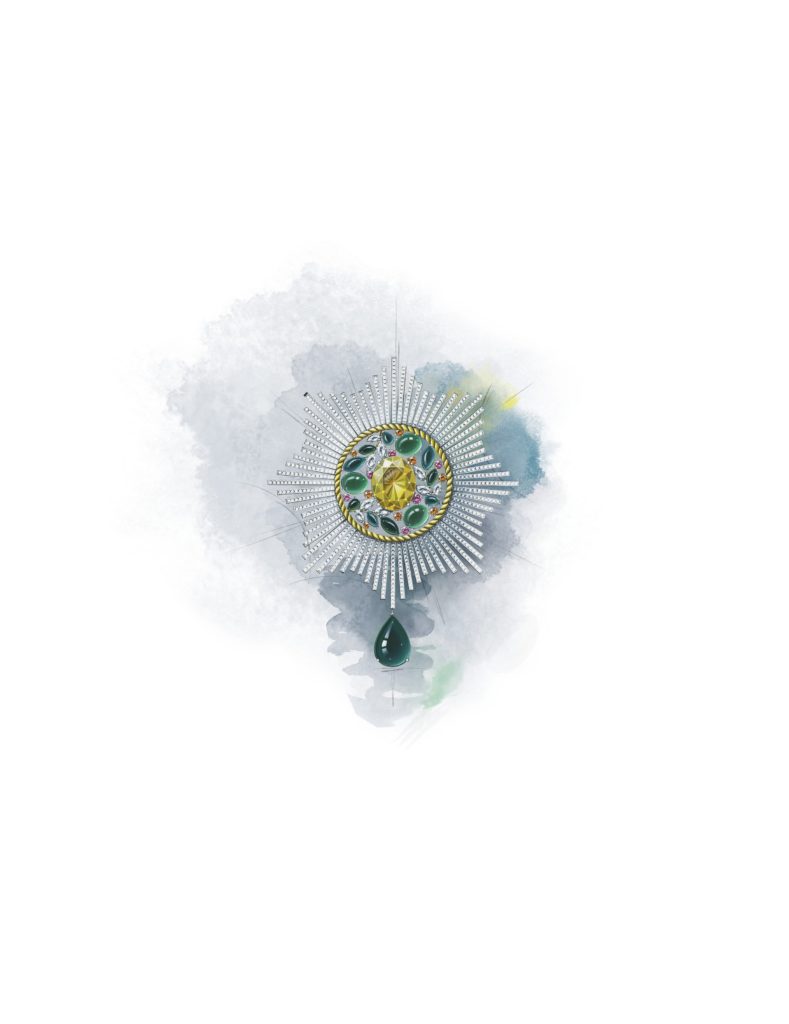 This is, however, to forget that she was a multifaceted being, and that she adored, as much as she did stripping away, the most flamboyant Baroque creations, lavish decorations, gold and rock crystal, Byzantium and Venice. For her, everything was first born from desire, the effect of encounters and passions. It was thus in the same year that Ernest Beaux (perfumer to the Tsars’ court) created the revolutionary N°5 formula for her, that her fashions began to take on Russian accents. A figure loomed behind this change, one of elegance and discretion: the Grand Duke Dmitri Pavlovich, cousin of Tsar Nicholas II, who was a seductive young man with light-colored eyes. Gabrielle Chanel had known the Grand Duke since 1911 and reconnected with him in Biarritz in 1920. They had a brief and intense affair. A fallen hero from one of the wealthiest courts in Europe, he introduced her to a whole universe of motifs and designs that would reverberate powerfully in her creations. The friendship she had formed three years earlier with Misia Sert, a “queen of modern Baroque, who lived her life amidst the bizarre, in mother-of-pearl, in burgao” had already, to speak in musical terms, arranged the first notes of the Slavic theme in Chanel’s life. Her ardent passion for Dmitri gave this theme new intensity, which was further developed by her encounters with the countless artists fleeing the Russian Revolution: first Stravinsky, followed by Diaghilev, whose venture she would later support, as well as the magnetic dancers and choreographers of the Ballets Russes: Léonide Massine, Serge Lifar and Boris Kochno. 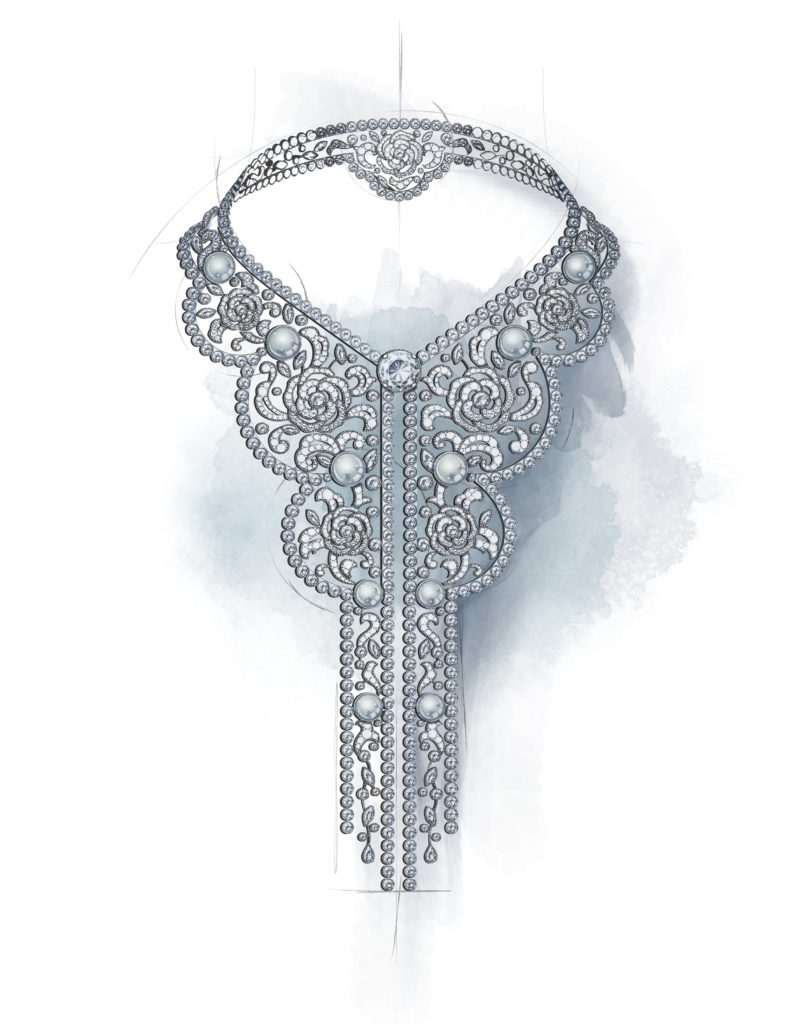 Yet these are just a few of the heroic faces of an exodus that caused anonymous crowds to flood Europe, particularly France and Paris. Singers and artists, actors and musicians, admirals and refined aristocrats all found themselves compelled by force of circumstances to find new employment, in every sense of the word: they were “degraded princes, great ladies selling flowers, officers of the Guard and admirals of the Imperial fleet turned waiters, cooks, and porters”3 as Joseph Kessel described in Princes of the Night in 1927.

Some made it all the way to their former resort towns: Biarritz, where Grand Duke Dmitri established himself, and Nice, which would later become home to the stunning cathedral of the Tsarevitch, as well as an unlikely isba transplanted to the Valrose gardens. A “Russian Paris” began to emerge during these same years inside of Paris: its holy places were the Alexander Nevsky Cathedral on rue Daru, the Chaika and Talisman restaurants, the avenue de Suffren, Petrossian on Place St. Charles, and so on. The 16th arrondissement and an entire section of the 15th arrondissement became the gathering places for the richest “White Russians,” while the less fortunate among them transformed Boulogne-Billancourt (located near the automobile factories) into “Billankoursk.” At night, all of them gathered at the Yar, the Troïka, and the Château Caucasien on rue Fontaine in Pigalle. Within these bars with stucco-style décors, at the Scheherazade or La Caravelle near the Champs Elysées, gypsy musicians, dancers and magicians would work to make the nights seem fleeting to those who listened, leading them into the bewitching hours of the early morning. 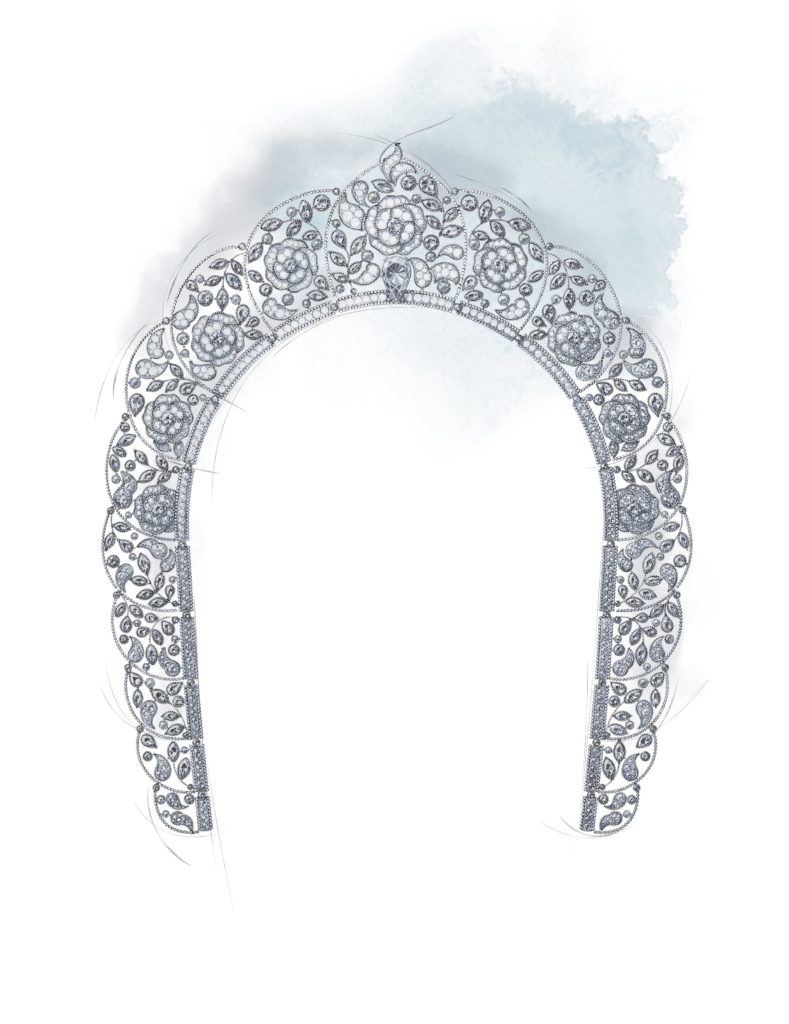 SARAFANE necklace transformable into a headpiece, in white gold, cultured pearls and diamonds.

Chanel acknowledged decisively to Paul Morand. The vocabulary of her fashions was enriched and transformed: into it, she incorporated long tunics, smocks, fur-lined cloaks, and large belted blouses modeled after traditional roubachkas. In 1923, when Vogue Paris noticed the presence of motifs borrowed from old Russian embroiderers in her fashions, it was because she had urged Dmitri’s own sister, the Grand Duchess Maria Pavlovna, to open an embroidery workshop named Kitmir, guaranteeing her exclusive production from 1921 onward. The Grand Duchess liked to tell people how the success of these embroidered models was so great that she would hide herself from saleswomen when she visited Gabrielle Chanel, who was already knee-deep in orders. Grand Duke Dmitri also introduced his lover to some exiled compatriots. Some quickly became the designer’s close friends, such as Prince Koutoussoff, whom she hired as a private secretary. Chanel soon thereafter began to pride herself on employing the Russian nobility listed in the Almanach de Gotha as models and saleswomen, and claimed: “it is the Russians who have taught women that it is not dishonorable to work. My grand duchesses worked for me as knitters.”5 Gabrielle Chanel never set foot in Russia, however, it remained for her an imagined country that she kept firmly in her dreams. She was so enchanted by this distant empire that she chose to adorn her apartment at rue Cambon with a mirror featuring a sculpted frame depicting the two-headed eagle of imperial Russia. This emblem was also echoed in the title of her dear friend Jean Cocteau’s play The Eagle with Two Heads, which recounted the tale of a romantic drama set in an imagined Russian land. 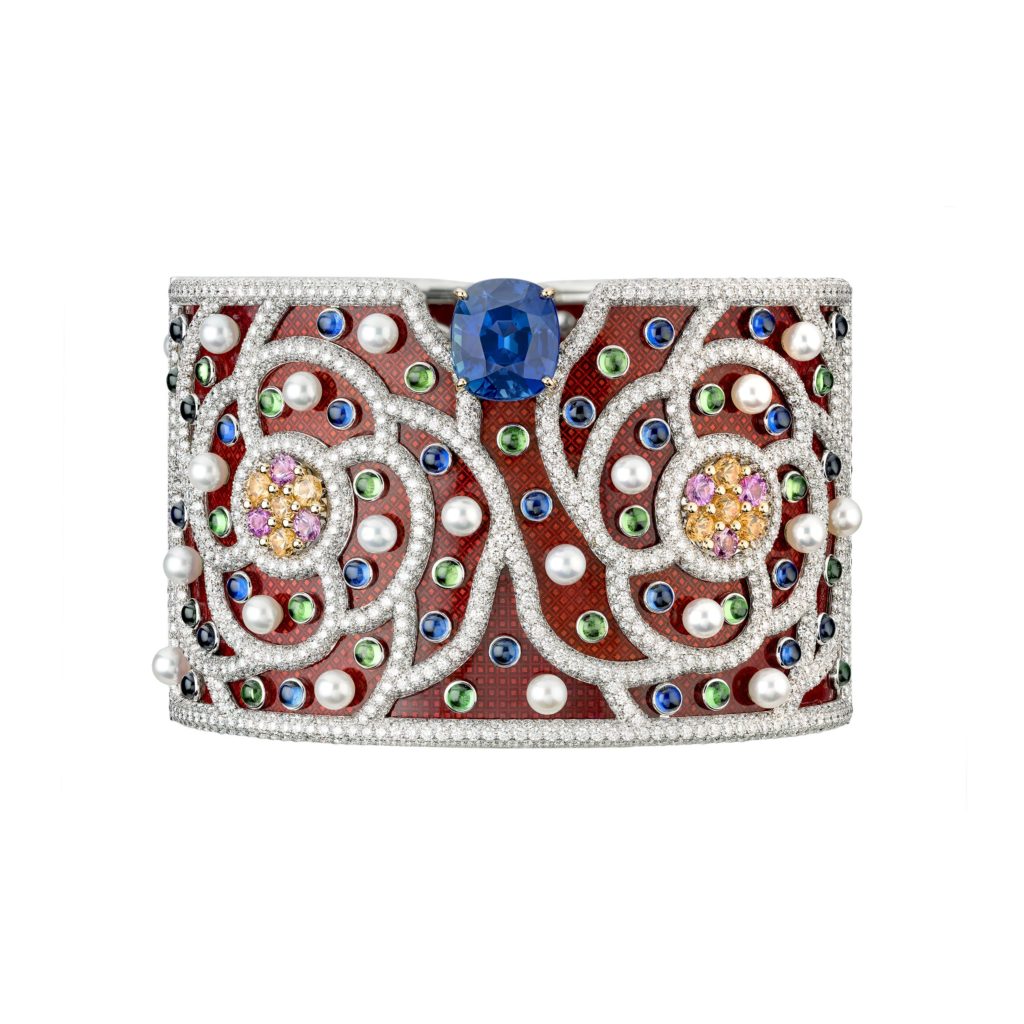 It is within this dream that LE PARIS RUSSE DE CHANEL High Jewelry collection finds its roots. The two-headed eagle features prominently in the collection, sometimes reduced to a symbol or outline, and is combined with the octagon (reminiscent of the mirror’s shape) or the camélia, creating the setting of a ring, or radiating from the center of a necklace belonging to an imaginary “Order.” It is paired with multiple variations of select motifs from Russian decorative arts: embroidery in the bright colors of roubachkas, cuts inspired by kokoshnik (headdresses made of velvet and adorned with pearls and trimming), scarves and fabric printed with traditional folklore motifs, and so forth. These motifs have inspired the ogive cut of necklaces or head ornaments, as well as delicate earring motifs, large pearl sautoir necklaces and draped necklaces of yellow sapphires, garnets, emeralds and diamonds. In contrast to the luminous clarity of these precious gems, the collection also features a line of sets with radiant chromatic effects, showcasing the richness of traditional craftsmanship as well as the colorful exuberance of the Ballets Russes, with whom Chanel shared a sense of adventure, a passion for innovation, an exaltation of the human body, a feeling for friendship and a penchant for festivity. A celebration of the moment behind which lies an essential feeling of nostalgia. Serving as a common thread throughout the designer’s life, her Russian passion experienced a sort of epilogue in 1967 when the runway show for her collection was held on Moscow’s Red Square. Gabrielle Chanel did not attend the show, but was represented by her models, who brought her back sheaths of wheat to thank her. One of Chanel’s favorite motifs, the ear of wheat, which is associated with gold and the sun and is a symbol of luck, is showcased in this collection as another theme symbolic of Russia. She surrounded herself with the delicate sheaths she received from her models, placing them next to the gilded bronze one designed by Robert Goossens for her apartment. They were to her fragments of this distant country, whose echoes she never stopped collecting, and which she opted to preserve as a dream world. 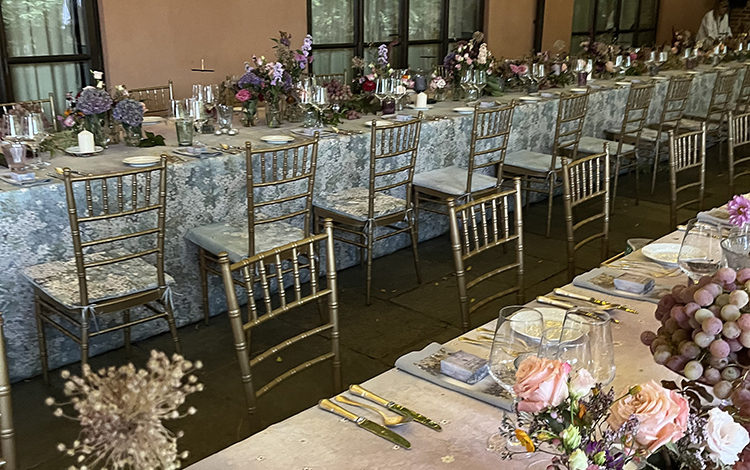