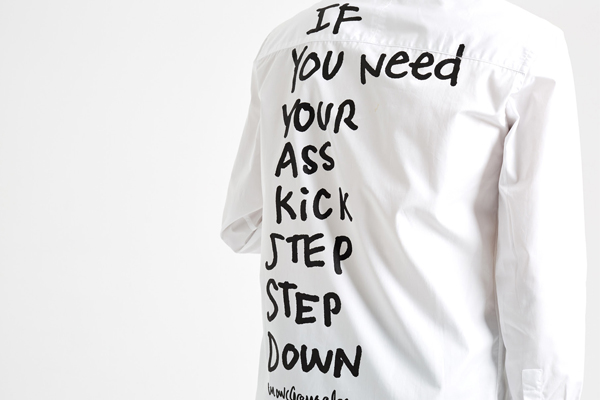 Mark Gonzales, often referred to as “The Gonz”, is an American skateboarder, poet and artist. Shredding in New York by way of California, Mark is known around the world for his innovations in skateboarding and is highly regarded amongst the global skate community as one of the most influential skateboarders of all time.

In addition to his skateboarding career, Mark is a working artist and poet, whom is known for his poetry zines and distinct illustration style.

The collaboration comes in collision with the release of Études’ Eighth Collection, Up and Down Town. The collaboration began at the SS16 runway show, where Mark provided an audio recording of his poetry which was then interwoven with an original soundtrack by Kindness.

Formed by a marriage between poetry and skateboard culture, Études felt that Mark was the pinnacle representation of the collection.

Stylistically speaking, there exists a crossover in Mark’s work and the N°8 silhouette, which is the idea of the neo-flâneur: one whom freely roams the contemporary society in which they reside. In Mark’s work, he writes freely as he sees, creating illustrations whose lines are guided by the city and the way we move through it, both physically and emotionally.

The capsule collection consists of the classic Info shirt and October tote bag in three styles with three artworks created exclusively for Études by Mark. In spirit of N°8, a small publication will be produced consisting of Mark’s poetry and artwork. Finally, a series of customized, one-of-a-kind, Horizon bomber jackets and Sesam hats created by Mark will be available in highly limited quantities.

Études will be hosting a launch party for the capsule collection in coordination with the 1-year anniversary of their flagship store in Paris.