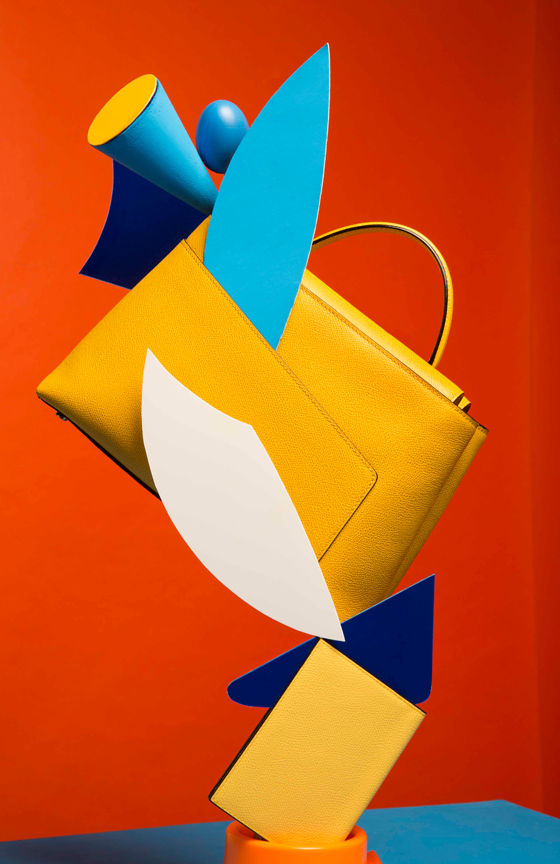 A project by Lorenzo Vitturi. Store Concept by Bernard Dubois

As quoted from Alex Fury’s project for Valextra “unbuttoned” : “The style of Milan is founded in Rationalism, a Minimal form of polished perfection. What happens when that perfection is disrupted?”

Lorenzo Vitturi was called to reinvent the world of Valextra’s accessories as convasses of colour and abstraction. Exploring contrasting notions of Valextra’s incarnation through a juxtaposition of mayhem and graphic order.

A Valextra bag seen as a perfect assembled system from which Lorenzo extracts fragments. Mixing photography, sculpture, installation in mixed media. Organic compositions, colour vibrant, protruding from and out of the store space. INSIDEOUT meaning unleashing what is not normally revealed.

Originally from Venice and with a background in painting sets for Italian cinema, Lorenzo Vitturi now lives and works in London and Milan as a photographer and sculptor. His pictures offer a magical realist mixture of streetcast portraiture, re-photographed collages and found objects, glowing with vibrant colours. In 2013 Vitturi achieved international acclaim for his book and exhibition project Dalston Anatomy, at London’s Photographers’ Gallery.

Dalston Anatomy is a joyful celebration of East London’s Ridley Road Market, an area renowned for its pungent aromas and exotic African and Indian produce. Vitturi took to searching out its strange treasures – pigs trotters and giant snails, luridly coloured chalks and hair dyes – and bringing them back to his studio to be photographed as sculptural assemblages, or collaged on top of his portraits. These collected works are a love letter to an area that’s changing fast, and this summer Vitturi has also collaborated with Dazed’s Fashion Director Robbie Spencer on the Maison Martin Margiela editorial “Kingsland Road Overture”, shot in a fantastical set featuring items from Dalston’s pound shops.

Lorenzo Vitturi is the winner of the 2014 Photography Prize at the Hyères International Festival of Fashion and Photography, and Dalston Anatomy was shortlisted for Paris Photo–Aperture Foundation’s First PhotoBook Prize and chosen as one of the publications of 2013 by Martin Parr, the New York Times, the Telegraph and Time magazine. His work has also been featured in Vogue Paris, the New Yorker and Libération, and exhibited at Foam Photography Museum in Amsterdam.