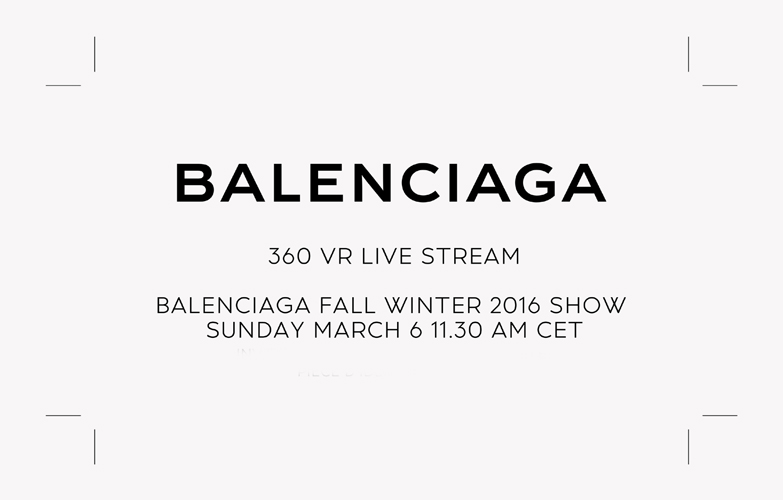 Opening the salon doors of one of the most venerable names in the history of Haute Couture, Balenciaga will present their fall/winter 2016 ready-to-wear runway show for the first time via a 360-degree live stream, exclusive to tablet and smartphone devices. An innovative technology, to showcase the debut collection of new artistic director Demna Gvasalia.

An egalitarian proposition, allowing a worldwide audience the unique oppor- tunity to view a Balenciaga show like never before, the experiential live stream permits unparalleled access to the experience of the défile: a full view, an entire 360-degree panorama, immediate and real-time for the new creative identity of the maison.

Tied to the progressive aesthetic of Gvasalia, an attitude of invention coupled with the reality of today, this broadcast permits an audience across the globe to experience Demna Gvasalia’s debut live, as if they were in the very same room. To present the virtual reality dé le, Balenciaga launches a custom application available on Google Play and the App Store for tablets and smartphones. Downloading the application will allow the viewer to immerse themselves in the universe of Balenciaga’s fall 2016 runway.

– A new panorama, for a new era of Balenciaga.

The Balenciaga fall/winter 2016 show will take place in Paris on Sunday 6 March 2016. Broadcast in 360-degrees on smartphone and tablet via the Balenciaga app. Live stream available for desktop at balenciaga.com