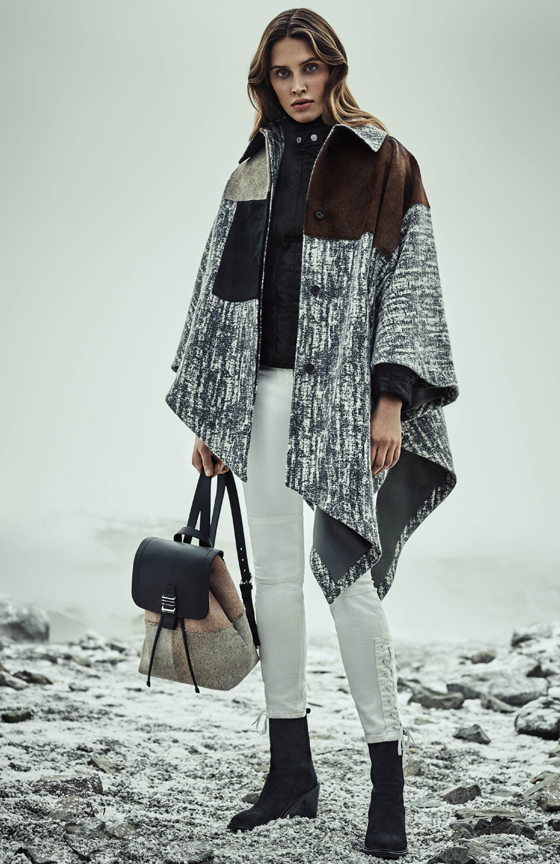 Following on from Pre-Fall’s theme of ‘Heading North’, Belstaff turns its attention to great polar expeditions for this Winter. Inspired by renowned female pioneers, the women’s design team was drawn to Edith “Jackie” Ronne’s great Antarctic expedition of 1947. An American journalist and historian, she was the first woman to be a working member of an Antarctic expedition, led by her husband Finn Ronne. She conducted research for 15 months at a small station the 21-member team had set up on Stonington Island in Marguerite Bay, on the west side of the Antarctic Peninsula.

This collection celebrates this spirit with a mix of polar and moto inspirations, influenced by wintry landscape textures of snow, icebergs and rocks and a nod to Inuit dress. Motocross leather pants are combined with fur-lined parkas, while embroidered jackets and patchworks of wools and skins bring richness to the collection. In all, it showcases Belstaff’s strong attitude and freedom of spirit but expressed with soft materials and lines.

“We were inspired by female pioneers venturing into the earth’s most bleak and hard-to-reach locations in the most challenging of conditions,” explains VP of Women’s Design, Delphine Ninous. “Protection from the elements, warmth and comfort are key themes, as are the stylistic influences derived from these lands and the animals and people that inhabit them.”

For the presentation of the collection, Belstaff took over the crypt of deconsecrated church One Marylebone, on the edge of London’s Regent’s Park. The high grey arches of the crypt provided a stark  backdrop to set the polar scene, with models placed on installations of perspex and opaque white Styrofoam, evoking kryptonite-esque icy shards.

Belstaff was delighted to welcome special guest female polar pioneer Christina Franco –  one of the only five women to embark on  a sole expedition to the North Pole. Her next attempt will be in 2017.

Belstaff is offering an advance pre-order service on select pieces for the first time in the women’s collection.