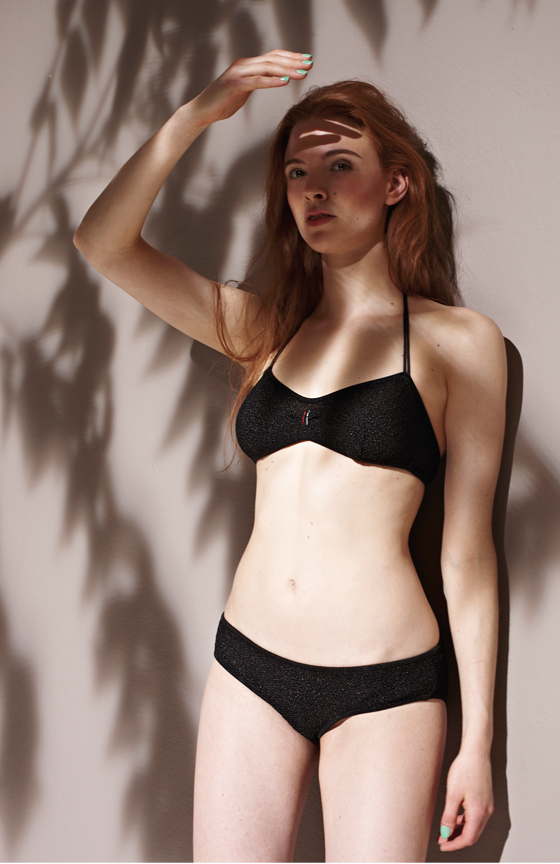 Q&A with Anna Berger, one of the designer duo of E.A. Sewear.

I actually never really reflected on being a designer up until recently. I was doing a lot of drawing and painting with my father at home when I was little. By the time I graduated high school I wanted to attend art school. I chose to study communication design but I was always torn between art and design. And then recently my bikini-partner Eva said, “I guess you are Head of Design, cause you are making all our design decisions.”

Is it your dream job?

My dream is to do something that I believe in. I believe in this project, but I don’t think it’s reached its potential yet. Hopefully in a few years, I’ll be able to say it’s my dream job.

Which was the first thing you designed and for whom (family, friends…)?

When I was in my early twenties me and my business partner Eva needed money for our summer vacation. We decided to collect second hand clothing from our friends (mostly men´s shirts). For two weeks we sewed womanswear out of it and stamped the logo *ä* on every piece with a potato. Eva had a huge Mercedes bus, and she actually screwed the sewing machine onto its floor. We went to an art market and made custom changes to clothes when they didn’t fit. We sold almost all of the clothes and went off to Spain.

Who is the designer you admire the most and why?

I have no favorite designer but I have always admired interdisciplinary work. Such as the graphic designer Oliver Darne who has already done several art projects where he places bee-hives in public,  it is called Zone Sensible. The bee hives are always presented as an art installation and the public can interact – taste honey, see what the bees are working on etc.  I believe if you put things in an atypical or unknown context new ideas and views come along the way.

Who is your muse, your icon, when you design?

I think nearly everything can be inspiring. The idea to put waves in our logo I got from a ballette stage setting. To represent water there were big neon lights in wave form all over the stage and these forms were appealing to me.

If you had to design an entire collection using just one color, which one would you pick and why?

The practical side of me says black. Cause most people can wear black.

Whom did you show your first sketches?

There actually weren’t any first sketches. We took my mother’s old crocheted bikinis as inspiration, and started working on prototypes with our team of grandmothers, and it evolved from there.

What is the fabric you love the most (silk, lace, velvet,…) and why?

We are making our own fabric for our bikinis. Right now we are using polyester but  I would like to explore more delicate materials and try making fabric out of silk and viscose or angora. it would be nice knitting something really light and designing underwear out of it.

We are just at the beginning and have not nearly explored the possibilities of knitting. So I would rather say what I would choose in the future. The song “Simple words” by Ellen Fullman and Konrad Sprenger. It is a truly odd song with weird sounds and vocals but nevertheless it has a danceable beat and is digestible. I feel like what good fashion is about: Just that much invention so people can handle it. (To all the people that make the effort listening to this song: You also gotta listen to “Empty building” by Ellen Fullman and Konrad Sprenger)

Do you have any trick to avoid that “blank page” moment when you’re at the beginning of designing of a new collection?

I have the opposite problem. I could do something new everyday and I have to avoid not loosing track. The trick for this is waiting till the ideas fade.

Had you not become a designer, what would you like to do and why?

I would like to be a researcher and do research on the behavior of apes.