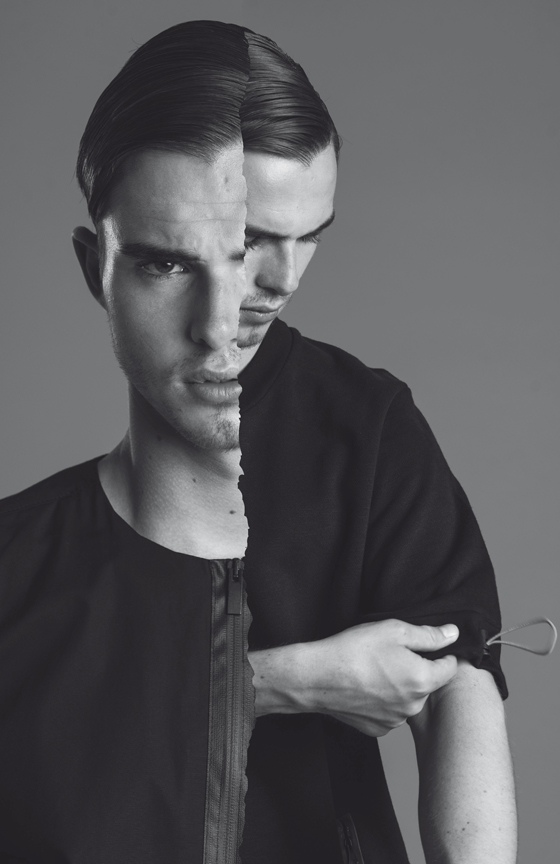 Q&A with Adrian Rieman, one of the designers behind Trinitas.

TRINITAS creates its own world, which evolves out of existing structures by creating new constellations through abstraction, disassembling and putting things into new contexts. Harmonization is accomplished by working only with black and white.

TRINITAS fundamental core is its graphical language, combining non-stand- ard cuts, printing techniques, materials and patterns. New collections are released as VOLUMES, and every Volume has its essential theme, but all to- gether tell one continuous story.

TRINITAS is exclusively produced in Europe and works only with selected partners to create high standard products.

I always drew and painted for as long as I can remember, and started designing and printing on T-Shirts when I was 13. It was a long progress from the mindset and creative ability of a thirteen year old to the intricate, yet clean and simple designs I am making now. At some point my development as an artist, or in that respect designer, decided that for me.

Is it your dream job?

It’s my first real job, so I cannot answer that. Who knows what will come!

Which was the first thing you designed and for whom (family, friends, romance…)?

I can’t remember. I believe something for myself.

Who is the designer you admire the most and why?

I don’t care about fashion designers, but old school graphic designers like Otl Aicher are my heroes.

Who is your muse, your icon, when you design?

At the moment, I don’t have a muse or an icon because I am focused on my own work. When I was younger however, I looked up to Pharrell and Nigo, as well as other Japanese streetwear designers. They inspired me the most, and I continue to be influenced by my memories every single day.

If you had to design an entire collection using just one color, which one would you pick and why?

The colour grey or clean grey shades as they emit a certain simplicity.

Whom did you show your first sketches?

My brother. He was my biggest judge.

What is the fabric you love the most (silk, lace, velvet,…) and why?

Jersey. It’s just so easy and comfortable to work with.

Everything from the 90’s East Coast Hip Hop era.

Do you have any trick to avoid that “blank page” moment when you’re at the beginning of designing of a new collection?

I always try to think ahead and collect ideas that don’t fit the current collection to safe them for the next collection.

Had you not become a designer, what would you like to do and why?

I don’t really know. I could see myself working in gastronomy.