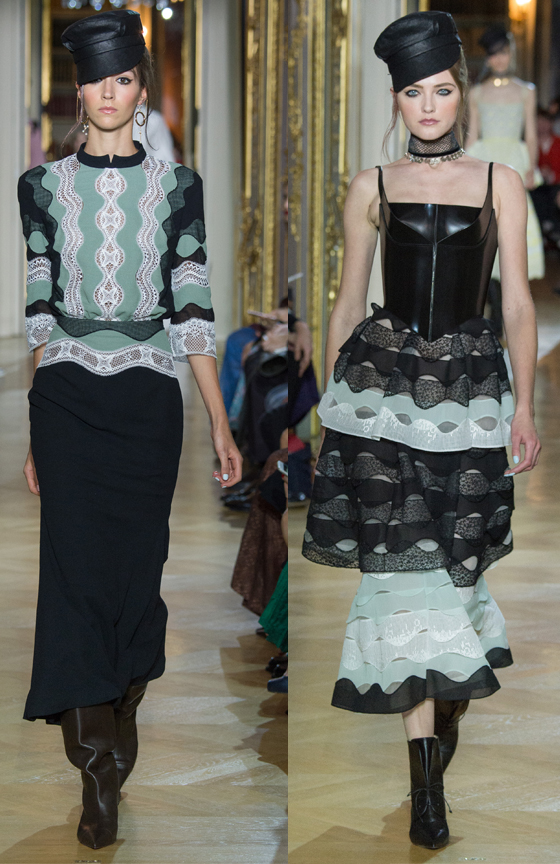 With her unique flair for storytelling, Ulyana Sergeenko creates dreamy fashions that nonetheless speak of the present moment.

The turmoil the world is going through brought her attention to two flamboyant historic moments, which carry striking resemblances despite being very distant from one another: the end of the Russian Empire in the XIX century and the last decades of the Soviet Union at the end of the XX century.

The former was an era of balls, carnivals and fireworks in Moscow and Saint Petersburg, of love affairs and a gipsy spirit, of mysticism and superstition.

The Eighties, instead, were the era of the hedonistic sounds of Madonna and Boy George, of the outlandish looks of the New Romantic and David Bowie’s gender bending. Both times were theatrical, expressive and free.

Ever evolving and in a constant state of flux – just like fashion – the Ulyana Sergeenko character this season is an eccentric denizen of a festive environment: a queen of bohemian parties and endless extravaganzas who likes to wear men’s hats and maybe smoke a cigar.

The silhouette is unremitting: a tall line sculpted by architectural bustiers, with wide shoulders. In the allmixing, layered spirit typical of the two eras, the collection is filled with gipsy skirts and voluminous shirts. Draped shawls add mystery, while pixilated embroideries taken from the early era of video-games add a zing of humor.

The visual intricacy of the whole picture is further highlighted by decorative chains, prints with 3D effects, floral jacquards and ribbons. Artist Elena Shnaider, member of the Union of Artists and master of the ancient painted technique, created hand-painted medallions exclusively for the collection.

Fabrics are voluptuous and precious: printed silk, taffetas, organza, patchwork textures; leather, sheepskin. In line with Ulyana Sergeenko’s exquisite taste for the handcrafted , for the first time Yelets and Vologda lace are handknitted with painstaking, time-consuming dedication in delicate shades of yellow, purple and green.

The painterly color palette, inspired by the Julius LeBlanc Stewart 1877 painting “Lady on a pink divan” is an ethereal amalgamation of notes of purple, pink, lemon, green, orange, yellow, black and white.

Accessories bring the festive spirit of the collection to a theatrical height. Mask-shaped, hand-embroidered sunglasses are a nod to memorable maskedballs but also to Bowie’s endlessly changing disguises.

The idea of disguise also informs the cat-shaped bags decorated with semi-precious stones and hand-painted with motifs like Marie Antoinette’s and gipsy dresses or David Bowie’s scenic suit. Duchesse bags are embroidered with card motifs, in an homage to the card-playing obsession of the time. Fish-shaped bags are inspired by Russian duke Nikolay Yusupov who wished to turn the park of his Arkhangelsk manor into a paradise garden, and for pure sake of entertainment put gold earrings to the pond’s small fishes.

The hats and the peasant caps have been created by Stephen Jones Millinery, who also developed veil carnival masks. Headpieces are made of silk and flax. Shoes are again a collaboration with Christian Louboutin: low-heel pumps and boots creating a new look for the Ulyana Sergeenko woman. Evening styles in delicate pastels have a nacre finishing or are decorated with the band in hook knitting technique.