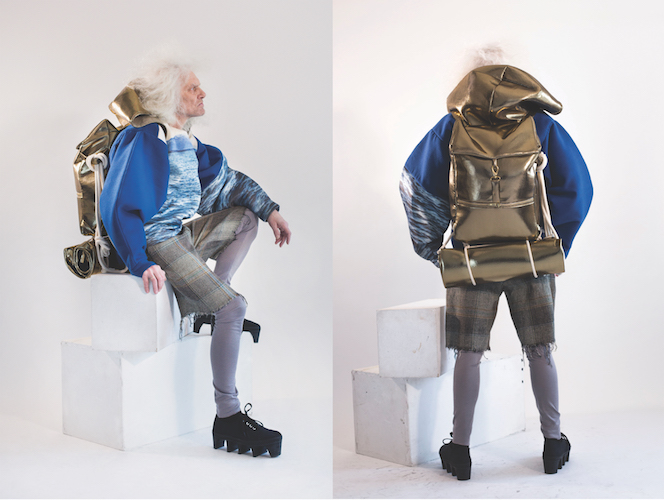 Liucija Kvasyte is a young Lithuanian designer, who is already acknowledged in the Baltic states in various fashion shows. This is our exclusive Q&A with her. Interview by Raminta Speciute.

When did you decide that you want to be a designer?

I was a hyperactive child, so I had difficulties concentrate in classes. For this reason, long time I have not found an area that I would be interested. The first plans, of course, have been associated with astronauts and firemen, then I thought about floristic. Last year at school I started to attend preparatory courses in the Academy of Fine Arts in costume design studies – I do not remember how magical enlightenment, but it was first secured and specific determination.

What is the first thing you designed and for who (yourself, a friend…)?

It was tuxedo, which I made according to the magazine Burda moden patterns for my self.

Parents opinions always have been important for me, so probably they were the first.

Where do you go or do for inspiration? Who inspires you the most?

I do not seek inspirations – I think it comes as natural as the desire to eat or go to sleep. I am most inspired by trips and people in their desire to develop and build their lives, to create art, to grow flowers, invent medicaments, to have children and so on.

How does inspiration turn into reality? What is your creative process?

Usually I have the imagination of total collection or its mood, by whom I put together a concept and then work on objects and their combination.

Do you have any trick to avoid that “blank page” moment when you’re at the beginning of the designing of a new collection? Do you watch a movie, flip an old magazine…?

I have a sketch book, which contains all ideas, so there is no shortage of them. Of course, the fulfillment of idea to the object is not an easy thing, but the ability to express ideas and nowadays issues through things, are an important feature of my specialtie.

Who’s your muse, your icon, when you create an outfit?

I like the individual orders, because I can create a garment, thinking about that person. Thus it is really unique and special. My last collection “Journey. ’83-’13 “ hero is my dad who is now admired by a broad audience, because of nice concept and amazing appearance.

How would you describe your design aesthetics?

I like to combine incompatible things, work on the principle of paradox. Garment, which I create, is an art object and design product at the same time.

Is there any particular detail/fabric/element/… that you use repeatedly in your designs? If so, why?

Now I really like the metallic surface and the old-fashioned and modern cloth harmonization.

If you had to design an entire collection using just one color, which is the one you would pick?

It is easier to work with black, but I would try to work only with the burgundy red.

If your clothes had a soundtrack, which songs, artist or composer you would choose?

It would be something with more motivation as rap and melancholic as Trentmoller. Therefore, yes, probably I’d prefer the Camp Lo, Massive Attack, M83 and Trentmoller.

The fabric you love the most: silk, lace, velvet..?

Now I like faux fur, which variations you will see on my new collection soon.

Could you describe a woman/man who would wear your designs?

My character is each of us, but always a perfectionist who wants to know and understand.

What are your plans for the future in fashion design? Are you preparing any new concepts or collections right now?

I am a student in Vilnius academy of arts (on my masters’ degree), so I am writing a job on the subject ‘ Religious symbols in the context of modern fashion’. It will be a mixed collection, which presents clothes for a believer, who wants to represent their religious creed. It is pretty complicated, but I think a good theme for a master work. I do not seek to shock, I want to draw attention and encourage people to be conscious. There will be a lot of symbols, accepted metaphors, mysteries, colors and textures portray through the punk subculture.

Here is a fashion film of her last collection JOURNEY ’83-’13: