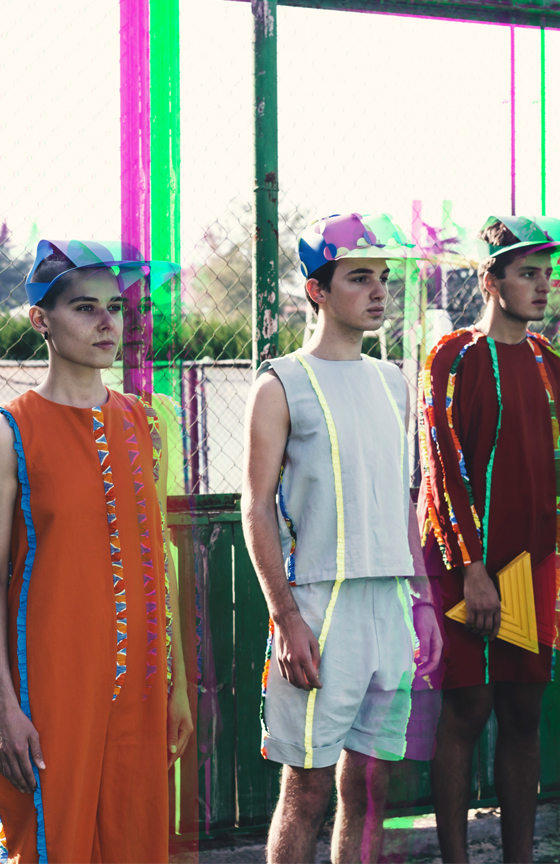 Ria Keburia is ready to present her new collection SS 2016, which will focus on the links worlds of modernity and the Soviet Union, fresh ideas and retro style.

Drawing inspiration from the history of USSR, Ria boldly uses the brightest associations about the life of the Soviet people, their attitude to sport and healthy lifestyle. The designer combines within a collection several cultural layers of the time, mixing the constructivist architecture and symbolic minimalist suits of the athletes.

First of all, Ria is inspired by people, young talents, full of ideas and ready to realize their limitless imaginations to life. Any collection of Ria Keburia integrates a number of collaborations with contemporary artists and designers.

Impressed by Live sculptures of Roman Ermakov, Ria invited him to develop a series of prints and implement them in the collection. The main idea here was the glorification of the success and achievements of Soviet athletes at the Olympic games of 1980, established the USSR as a superpower. Every detail is very symbolic for thenew collection.

Ria combines the minimalism of Soviet design extraordinary structural properties that produces a space for a new Universe, filling it with infinite imprints of Soviet Union’s culture.

Brand Ria Keburia always looks into the future and is a step ahead of fleeting time. So, the retro style suits of the “new” Soviet athletes are added with the hats from Turbo Yulia, design and texture which obviously overtake the future.

At the crucial moment Ria Keburia again gets out of the sleeves her trump card – all that sexlessness, expanding any idea of it exponentially, and thereby recreating on the podium ashendene Olympic games.

A series of teams with 4 people in ready to compete on the catwalk for the awards and the attention of the audience. The key to unlocking new puzzle from the brand – collaboration with Forms that created funny polyhedra bags, some semblance of the baton. Completion of modern athletes’ looks is joint with Vans, whose sneakers were added by Roman Ermakov with applications and illustrations in the spirit of the Olympics. Now the baton is in full swing, and the audience will cheer for the victory of the inexhaustible creativity and art without borders, which has already become a distinguishing feature of Ria Keburia.