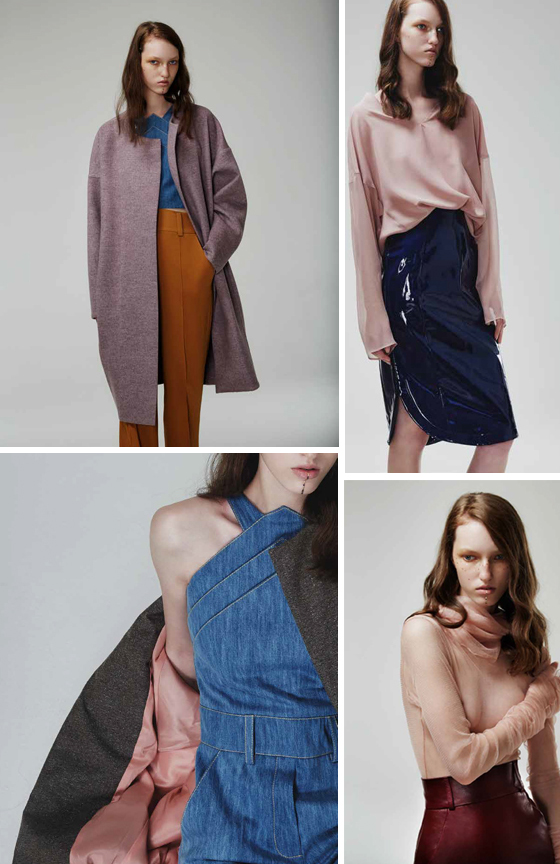 Among the images that influenced the choices of shapes and materials for the Spring-Summer 2016 collection are the Moscow Telegraph Building and the memorial house of filmmaker Sergei Paradzhanov that pointed the designer towards several constructive solutions.

The texture and muted colours of tufa that’s been used for construction of many buildings in Armenia’s capital Yerevan influenced the choice of basic fabrics and colour schemes. Modern-day interpretation of Armenia’s art and tradition have always been one of the features of this fashion brand.

A picture of her younger sister, taken in the house garden at Gyumri, nudged the designer towards the first-ever appearance of denim items. The denim skirts of this collection are gradually getting shorter — from the floor-length to the mini — a reflection of squares in perspective from the painting of American artist Robert Irving.

Paradzhanov’s “Composition” made out of tin foil found its reflection in the “metallic” texture of the leather. The lip tattoo of Maria Valverde in Ridley Scott’s “Exodus” and the cosmic Tilda Swinton in Jarmusch’s “Only Lovers Left Alive” formed the foundation for the model’s image in the lookbook. A lonely rose seen by the designer in some Moscow cafe found its way to the lining of a dress.

The specks of cobalt blue that illuminated the concert of English singer Jesse Ware can be seen in the lacquered artificial material that reminds one of leather. The wet and desolate Normandy wharf in February and the spot beam of the streetlamp on the wall of an old house in Salzburg also added to the collection of designer’s impressions of the world around her.

The Spring-Summer 2016 collection combines loose-fitting and tailored pieces, the contrasted stitching of denim overalls and the soft cashmere coats and pastel-coloured cocoon raincoats. But the confrontation of puffed-out details and elaborate design — of the soft silk and cashmere and the tough, form-fitting and texturized denim and poplin — are only an appearance.

Both the wraparound cashmere cocoons and the severe dresses with a thick breastplate that remind one of plate armour are, in fact, a protection from the aggressive outside world. And the use of coloured metallic lame reminiscent of foil only underscores this metaphor.

To emphasise the architectural principle underlying the collection, the designer created a capsule collection Vardoui Nazarian Lab made solely out of coarse calico that is usually used for mock-up models. “By doing this I wanted to show that clothes can be beautiful even when made of the simplest of materials. The idea finds its pure manifestation in the simple white fabric,” says Vardoui.