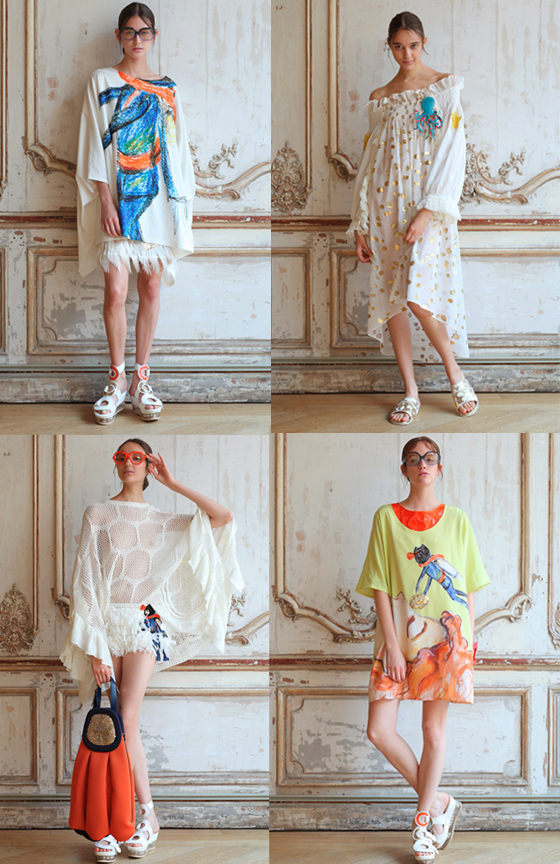 Dive into the depths of Spring 2016 with Tsumori Chisato as sea breeze and sunshine bring the unmistakable scent of adventure. Below the surface lies a treasure for the diver who dares to follow the bubbles.

Under the waves, the richness of the marine world becomes a trove of inspirations that can be seen clearly through the indispensable diving mask. Touched by Tsumori Chisato’s vivid storytelling, the fisherman’s net becomes a grid that frames this precious chase. A glint of gold catches the eye, revealing long-hidden treasure of some pirate king as the shining coins tumble out into the water. Escaped pearls come to rest in the sole of a sandal, their sheer echoing soft pink.

Summer elegance is easy, cut in lush cotton and tactile silks, to adhere to Tsumori Chisato’s luxurious identity. To emulate the textural play of the marine world, cotton lace features the underwater decor, while a pocket enlivened with organza figures flippers; bubbles become a broderie anglaise pattern contoured in bright coral, while seaweed shimmers on a crisp organza as if touched by a caressing current. As a nod to the season’s underwater inspiration, accessories encapsulate the whimsical spirit of Tsumori Chisato.

All around, cool shades of blue and crisp white, occasionally warmed with tropical brights such as coral or lime yellow, accompany this sophisticated plunge into summer’s best memories.

On the seabed like a pearl waiting to be revealed, lies the ultimate treasure: the elegant femininity that Tsumori Chisato reveals, tide after tide.