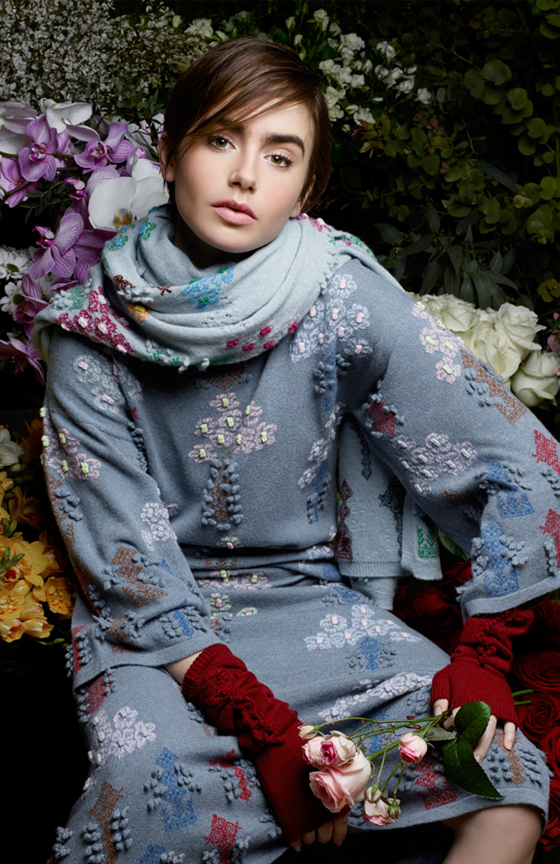 The actress Lily Collins, the face of Barrie Knitwear for the third season in a row, poses in front of the camera of Karl Lagerfeld.

The Scottish cashmere brand Barrie Knitwear, has chosen to renew the collaboration with Lily Collins; the Anglo-American actress is the face of its third ready-to-wear collection, fall-winter 2015, photographed by Karl Lagerfeld.

Following her critically acclaimed acting debut in 2009 in the film The Blind Side, the young actress went on to co-star alongside Paul Bettany in Priest. But her big break bringing her into the public eye was in the role of Snow White in Mirror-Mirror, playing opposite Julia Roberts.

The camera hasn’t stopped rolling for Lily Collins ever since. After “Love, Rosie” towards the end of 2014, she will appear at the end of this year in a movie written and produced by Warren Beatty.

“I have always admired and respected Karl Lagerfeld. He is the true representation of an artist and virtuoso. Collaborating with him on this third Barrie campaign was such an incredible experience. He has such an impeccable eye for finding beauty in simplicity and for enhancing the character of each look by mixing the most unexpected prints and designs. His innovative vision adds a fresh edge to Barrie’s history in this campaign.” stated Lily Collins. Born in England, she was a natural match for this cashmere manufacturer located in the Scottish Borders since 1903.

Barrie presents its third ready-to-wear collection for the Autumn-Winter 2015-2016 season.

For this new wardrobe, the Scottish house continues to shake up cashmere’s classic codes, shaping a new dimension for the category. Actress Lily Collins returns as the face of the collection, photographed by Karl Lagerfeld.

In the hands of Odile Massuger, this most noble of materials ventures outside of its comfort zone, adopting a modern allure at once radical and compelling.

This broad collection brims with unexpected creative twists. Uniform and uniformity are not to be confused. Breaking with convention, sweatpants are paired with sweaters in knitted floral motifs with 3D volumes. Super-size ponchos are surprisingly lightweight, their hand-cut fringes playfully whipping the legs of pencil skirts. On cardigans, tangy colours and quirky prints give a jolt to the senses.

The Autumn-Winter 2015-2016 silhouettes are the perfect blend of poetry and technical innovation, melding contemporary graphics with a Seventies vibe.

The collection unfolds as a journey through the Scottish Borders, where the house has been based since its founding in 1903, melding tradition and fantasy infused with futurism and pop.