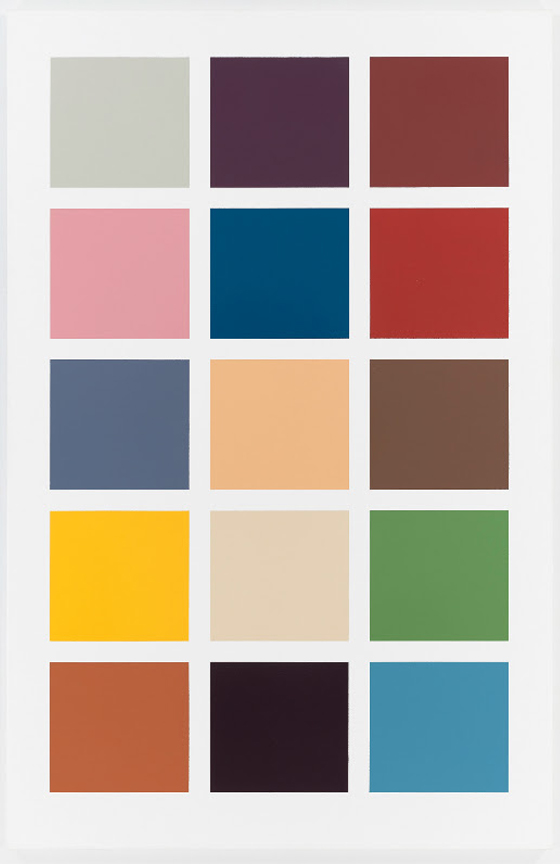 Dominique Lévy is pleased to announce Gerhard Richter: Colour Charts, an exhibition of paintings selected from the artist’s original nineteen Colour Charts produced in 1966. Presented with the support of the Gerhard Richter Archive, the exhibition is the first exhibition to feature a small but vital group of works from this series since their inaugural appearance at Galerie Friedrich & Dahlem, Munich in 1966. The exhibition also includes a group of Colour Charts painted in 1971, when Richter reexamined and expanded the series after a five-year hiatus. At once paradoxical and coalescent, the Colour Charts highlight an important moment in the artist’s career and are situated across multiple leading art movements of the twentieth century.

In celebration of the fiftieth anniversary of the Colour Charts inception, the exhibition brings together works from multiple prominent international institutions including Museum Frieder Burda in Baden-Baden, which is lendingSechs Gelb (Six Yellows), 1966, one of the largest single-panel Colour Charts and one of only six such paintings featured
in the 1966 Friedrich & Dahlem exhibition. Gerhard Richter: Colour Charts, also features the monumental 180 Farben (180 Colours), 1971, a work generously provided by the Gerhard Richter Archive in Dresden. Comprised of twenty panels, each with a three-by-three grid, this is the first painting Richter produced when he returned to the Colour Charts in 1971. Gerhard Richter: Colour Charts is accompanied by a comprehensive book featuring newly commissioned essays by Dietmar Elger, Head of the Gerhard Richter Archive; Hubertus Butin, curator and author of several key texts on Richter; and Jaleh Mansoor, Professor at the University of British Columbia, whose research concentrates on modern abstraction and its economic implications. This book is the first publication dedicated to the original Colour Charts.

The concept for the Colour Charts originated from a visit to a Düsseldorf hardware store, where the artist noticed an array of paint sample cards. Richter became inspired by the industrially formulated and chromatically comprehensive selection that was utterly devoid of aesthetic motive. Each Colour Chart presents multiple uniquely coloured but uniformly sized rectangles or squares of glossy enamel arranged on a white background. He copied the cards exactly, injecting as little compositional input as he could. Anecdotal accounts describe the influence Richter’s burgeoning friendship with Blinky Palermo had on the creation of the Colour Charts, as Palermo would visit the artist’s studio and—without any visual knowledge of the painting—arbitrarily call out the names of the sample colour cards, which Richter would then incorporate into the work. By 1971 his process for composing the Colour Charts had evolved; he began applying the function of chance by selecting the colours at random, further removing the artist’s engagement in the compositional process. In addition to works from these years, Gerhard Richter: Colour Charts will present a collection of archival documents related to the series, including an original 1960s Ducolux sample card for enamel paint.

Conceived during a period of intensive experimentation, the Colour Charts mark a radical stylistic shift in the artist’s practice, which had previously consisted of black-and-white Photo Paintings. The Colour Charts have been recognised as seminal in the artist’s oeuvre, as they set the stage for his renowned multicoloured Abstract Paintings of the 1970s and beyond. Richter has repeatedly indicated his belief that the dichotomy between figuration and abstraction is essentially a fallacy, and his expression of the same ideas through vastly different styles throughout his career corroborates this assertion. The Colour Charts are the first paintings in Richter’s career in which colour appears,  with the exception of Ema (Nude on a Staircase), 1966, a work that was produced as a response to Duchamp’s Nude Descending a Staircase(No. 2) of 1912. The canvases range from a few feet tall to roughly human height; in preliminary drawings for the paintings Richter sketched human figures alongside the layouts of some of the works, indicating the meticulousness with which the scale of the works was devised. Conceptually, the Colour Charts take on the primary function of industrial colour swatches—an instrument used to display colours—while simultaneously achieving a tonal neutrality. On a purely visual level, the blocks of colour are both abstractions and representations of a real object, and each painting taken as a whole exists intrinsically as an object. The paintings’ focus on colour alone imbues the series with a conceptual ambivalence: as Benjamin Buchloh has pointed out, colour “acts simultaneously as a substance and a sign, a paradoxical condition that no other element can claim…it can and will function at the same time as areferential [grounded in a universal given] and as a differential [perceivable only through variation] sign.” For the first time in Richter’s career, he is able to capture a referent and its representation in the same image.

Although the legacy of Abstract Expressionism still loomed large in the ethos of Western art during these years, the aesthetic quality of the series is more aligned with the contemporaneous prevalence of Minimalism—brought to Richter’s attention through Palermo—with its embrace of industrial materials, supersession of artistic temperament, and emphasis on objecthood. Richter has also stated that the Colour Charts manifest the influence of a Duchampian model of Conceptual Art. The appropriation of the paint sample cards may be most clearly connected to Duchamp’s last painting on canvas, Tu m’, 1918, which features a long, central, receding row of coloured squares framed by the shadows of the artist’s already famous ready-mades illusionistically rendered in paint alongside a handful of real, three-dimensional found objects. Tu m’synthesises the various means through which a painting may reflect reality: as allusion, impression, and as an object among other objects. Perhaps more telling, however, is Richter’s statement that the Charts more appropriately belong to Pop Art, a movement in which the artist was a major player on the European art scene, and to which art historians attribute the black and white Photo Paintings that immediately precede the Colour Charts. Richter’s concentration on commercial serialism and repetition in the Colour Charts support this ascription: they render multiples as originals. Moreover, like the works of Warhol and Lichtenstein, the series manipulates commercial media to impart an effect that is specific to painting, allowing the artist to question the limits and possibilities of aesthetic authenticity in an era defined by Western Capitalist mass culture. Taken as a whole, the Colour Charts embody a stratification of artistic principles that allows them to be recognised as one of many important motifs in the complex progression of Richter’s oeuvre, connecting the figural to the abstract and firmly grounding his practice within a Conceptual framework.