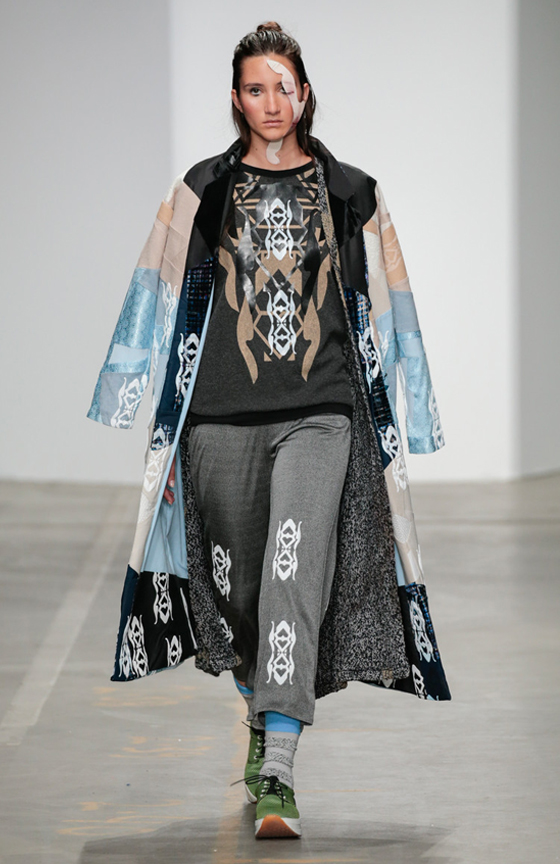 The 4-day festival program complete with fashion shows showcased upcoming creative talent, exhibitions, fashion film, awards, theatre and dance performances, lectures, workshops and a dynamic Side Program, which gave promising young talents from across the globe the opportunity to present their work to a diverse international audience and industry professionals. The 7th edition of the festival presented more than 150 talents from over 30 countries.

It was a very sunny weekend with happy visitors and radiant designers and artists, the shows were packed and sold out. The whole of Maastricht was dominated by fashion and the celebration of talent and diversity.

Fashionclash believes that fashion as an art form can stimulate critical debate about current controversial issues which are discussed in society. This year’s overarching theme during the FC Festival was Gender. The theme shaped the overall festival and was interwoven through the program inviting the audience to think about the broader spectrum within the gender codes.

The theme was mostly reflected in the Gender exhibition on main location, the Opening Show with VERWEVEN 2015 project by theatre performer Nina Willems, Fashion Talk with Aynouk Tan, Meet the Maker at Bureau Europe and the Tabula Rasa dance performance that literally brought the festival’s campaign image of the festival to life. Tabula Rasa is a joint project of Fashionclash, Project Sally Maastricht and Mieke Kockelkorn.

The festival ended with a festive award ceremony. Argentinian Lautaro Amadeo Tambutto, designer behind the label LAT won the Fashionclash Festival 2015 Talent Award worth EUR 5,000 and a spot in the 2016 program. LAT has been chosen by a jury panel consisted of Rosario Morabito (Vogue Talents), Carlo Wijnants (fashion consultant), and Philippe Pourhashemi (ASVOF). Jury panel about the winner: Philippe: ‘The collection offers an innovative mix between sportswear elements and folklore traditions’. Carlo: ‘The whole package from design together with the styling creates a string creative identity’. Rosario: The complexity of blending several elements tackling design, cultural and commercial elements resulting in a coherent collection”.
The Kaltblut Magazine award presented by Marcel Schlutt (founder and editor-in-chief KALTBLUTT magazine) and was given to Portuguese designer Patrick de Pádua. The Chapeau Magazine award presented by Xavier Cortenraedt (editor-in-chief Chapeau Magazine) and Elise Crutzen (fashion journalist) was awarded to MAFAD academy graduate Paula Reichert.

Graduating students of MAFAD (Maastricht Academy of Fine Arts and Design) showed their sublime collections, among them we find promising talent such as Rachel Prijs, Reinder Schmidt, Verena Klein, Julia Aumann and Mona Steinhaeusser who closed a show with a fascinating performance. Photo’s: Graduation Show The catwalk also functioned as a stage for performance artist Lotte Milder and her The Mutants performance Tabula Rasa by Project Sally Maastricht as well as a stage for theatre performer Daan Couzijn who caused goosebumps with his performance ‘Overdone’.

The fashion shows were complemented by a multidisciplinary exhibition where a selection of creative work curated around the theme of gender was exhibited. The former interior design factory of Mosa was
temporarily transformed into an innovative museum, where selected art works relayed the different visions of gender in various ways. Think among others photography, illustration, clothing, video, object and shoe design. In the exhibition the visitors had the chance to browse through installations by designers such as Stefanie Braz, Flora Miranda, Begüm Yıldırım, Camiel Fortgens and a fashion performance by Juliëtte Heijnen.

A performance project created by theatre performer Nina Willems, was yet again one of the main attractions of the exhibition. Three people were asked to tell the stories behind the clothes that they wear. How do these clothes reflect their personalities, memories and feelings? And how do they use their clothes to express gender? Every interview resulted in a short film. For every person that was interviewed, one young designer created an entirely new outfit which reflected their personality. Designers David Laport, Loes van Nijnatten en Schueller de Waal were all invited to take part.

Visitors were also able to visit the ‘Clash Project’, one of the main highlights of the festival, in the exhibition area. The project placed its focus on the connection between disciplines and visions. In other words it embodied the interdisciplinary spirit FASHIONCLASH tries to propagate. Ten non-fashion designers were invited to share their vision according to their artistic discipline in relation to fashion. Ultimately this lead to a ‘clash’ of philosophical, cultural and practical methodologies. As a result a new hybrid discipline took form.

The Designer Market completed the Festival programme at the main venue. This was a great opportunity for our visitors to personally meet the designers and buy their unique clothing, jewellery and accessories. Visitors discovered brands and designers such as Anna Vikman, Karin Brettmeister, Sciumé, MPA jewellery collective, Blueberries, Bola, Delacier, One Wolf, Sofya Hats, Mies Nobis, A158 and many more.