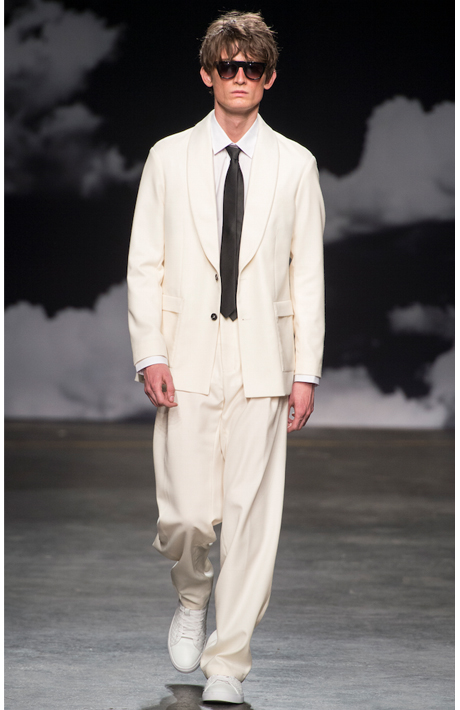 Though best known for their razor sharp approach and super-slim proportions, this summer the Tiger of Sweden design team have taken themselves into creative exile, embracing a more Mediterranean attitude. Where skinny once reigned supreme,
now rules slouch.

Since the company was founded in 1903, Tiger of Sweden has been famed for its incendiary approach to tailoring. Where once a suit was seen as the uniform of the establishment, Tiger took the traditional two-piece to the street, transforming the workaday garment into something edgy, exciting and above all, comfortable.

The brand’s pin sharp single and double-breasted jackets remain – cut slim in soft handled materials in pale shades of cream, dusty blue and Chantilly white – but trousers are wider than usual, ranging from a softly tapered straight leg style through to a looser, broader shape which feels both insouciant and chic.

Whilst Tiger’s traditional blacks and greys remain; the general mood is one of lightness and freedom. Pops of graphic pattern – from bold striped suits to a rust-hued jacquard print featured on dinner jackets and ties – lift the collection, affording it a distinctly Scandinavian edge.

Key pieces include a relaxed, elongated shawl collar blazer; a sharp denim two-piece – which perfectly encapsulates the street-wear focused aesthetic of the moment, while staying true to the Tiger of Sweden DNA – and a technical nylon parka in cream, which is designed to be worn with suit trousers, in the place of a traditional jacket.

Styling notes include wide brimmed panama hats; T-shirts and lightweight jumpers worn beneath wide-lapelled suit jackets, and loafers teamed with nearly every outfit – all of which help underpin the season’s understated, off-duty aesthetic.

It is this notion of escape and self-reflection that forms the foundation of Tiger of Sweden’s Spring Summer ’16 collection.