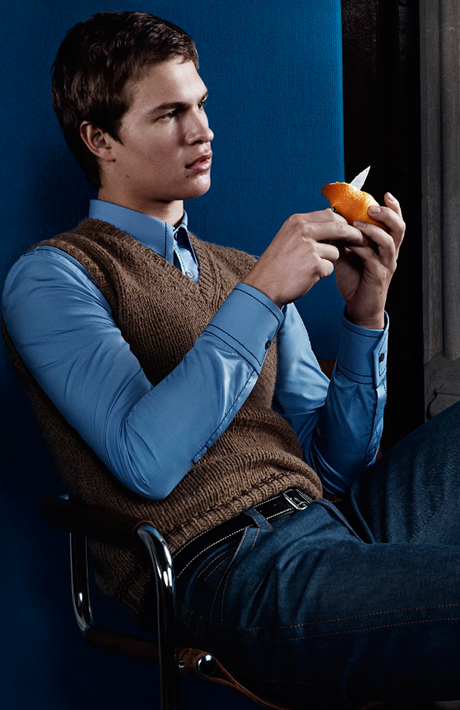 There are forces in feelings, and feelings in things. Attesting to this tangible truth are a series of graphic action portraits for Prada’s Spring/Summer 2015 Menswear campaign.

Four of today’s leading men lend their screen presence to an act of photographic forensics: Ansel Elgort (The Fault in Our Stars; Men, Women and Children; Divergent; and the upcoming Insurgent), Ethan Hawke (The ‘Before’ Trilogy; Boyhood; Predestination; Regression), Jack O’Connell (Unbroken; Starred Up; ‘71) and Miles Teller (The Spectacular Now; Whiplash; The Fantastic Four).

Photographer Craig McDean shoots the cinematic cast between London and New York. But the sense of place in is more psychological than geographical. Close-ups of hands, faces and agitated outlines conjure a sense of the unknown.

Objectsknife, orange, dice, prism, compass, pen, lens, pendulumare picked up, moved, balanced. Pensively scrutinized. Familiar things become less than familiar the more they’re looked at. As if the magical forces that make the world seem so normal have, for an indeterminately short time, revealed their strangeness.

Stitching is the leitmotiv of the collection. A graphic effect — large, small, in contrasting colours — revolutionizing and mixing classic codes while creating new ones. Modern proportions and silhouettes invoke the 1970s. Not as pastiche but pure peculiarity.

The images’ muted colour switches to bold black and white, then back again, mirroring the four actors’ fragmented mental focus. Silence, a space for secrets. In these photographs each of their personalities effortlessly perform new secrets.