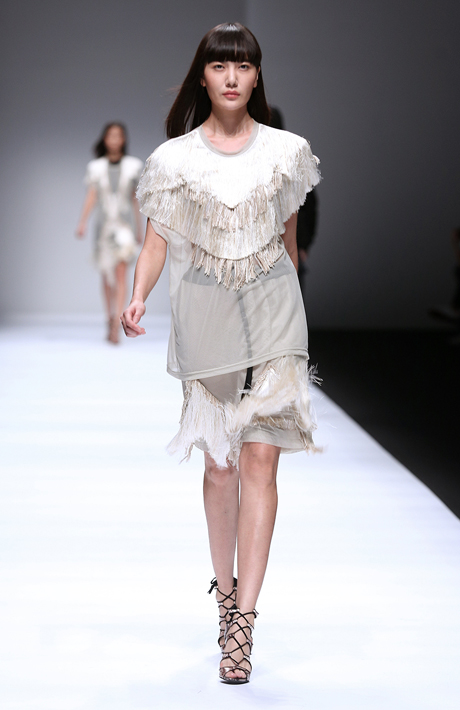 ANGELOS FRENTZOS AS GUEST DESIGNER AT THE SHANGHAI FASHION WEEK

In the largest market in the world and the Fashion Week of the largest city on the planet, Angelos Frentzos was invited, as one of the first European designers who participated in Shanghai Fashion Week. During the last years, the Chinese market of luxury brands is growing rapidly, and Shanghai Fashion Week is the largest and most prominent event in the world of Chinese Fashion, with the participation of dozens of designers and extensive coverage in the trade press, all local editions of international titles of fashion magazines, as well as special television channels.

After major European brands, such as Chanel, Prada, Maison Martin Margiela and DSquared2, Angelos Frentzos attended the event as guest designer, presenting a selection, especially for the Shanghai Fashion Week, from his three Spring- Summer 2015 collections. Specifically, Reversed Obscurations and Resort Ringmaster Make-Up (Womenswear), and Eraserhead Jugglers (Menswear). The show presented in a space erected in Fuxing Park in Xiantindi area, which gathers most large stores of European and international luxury brands, featured models, women and men, exclusively from China.

“I’ve always thought of Asian beauty as very charming,” Angelos Frentzos says. “I wanted to reciprocate the honour of the invitation from Shanghai Fashion Week, using only Chinese models. Moreover, my collections, which were influenced by the Asian circus, found excellent way to get highlighted by the faces of models from China”.

The show at Shanghai Fashion Week launched a two-year collaboration between Angelos Frentzos and the major showroom VDS, which operates in Shanghai, Hong Kong, Milan and New York. “In recent years the Chinese market has made an impressive opening to international brands, something I noticed even just by strolling in the shopping areas of Shanghai, where the number and size of branches of major brands, far exceeds that of European metropolises. China and its market constitute right now a significant opportunity and a great challenge for a designer», Angelos Frentzos says.

Shanghai Fashion Week, which ended late October, is held twice a year, as part of the Shanghai International Fashion Culture Festival, which lasts for a month. Sponsored by the Municipality of the City and the Ministry of Commerce of China, and under the supervision of Shanghai Textile Group, Shanghai Fashion Week, aims to invite renowned international designers, and to provide a showcase for young Chinese designers, as well as to create a channel for international brands trade in China.