slide
grid
You can use keyboard arrows for sliding.
1
84 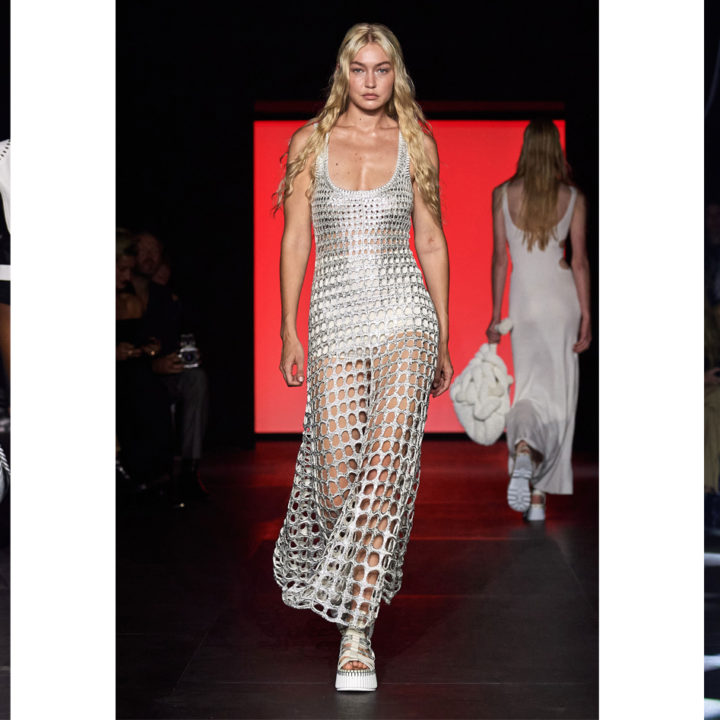 This collection pays homage to fashion as an art of invention, able to redefine the city of Paris over and over again, each and every time

Each Maria Grazia Chiuri collection is designed to open up room for the inventive imagination. For this Dior spring- summer 2023 ready-to-wear défilé, the Creative Director of Dior women’s lines notably uses the image of a map of Paris from the House’s archives, printed on a scarf and structured around the Avenue Montaigne*. Thus she traces her own path, between autobiography and reflection. Then comes the Tuileries Garden, which was commissioned by Catherine de Medici. An Italian who arrived at the French court in 1533, this noblewoman remains a figure emblematic of the relationship between women and power, and fascinates Maria Grazia Chiuri because of her political intelligence, but also the innovations she launched, such as heels, the corset, and Burano lace, introduced to the royal manufactures. 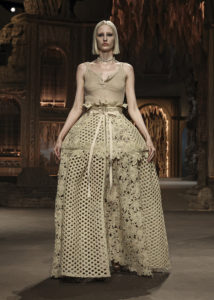 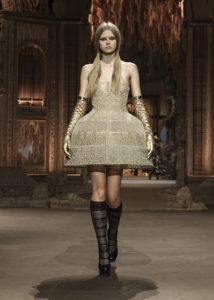 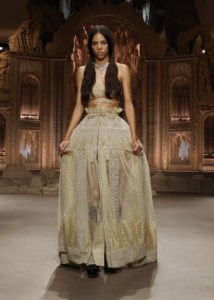 Women know how to explore magical territories since they have a privileged connection with nature and its vital force. They listen to the turmoil that often traverses them. That most secret realm, at once in the shadows and marvelous, is like the baroque caves that inspired the artist Eva Jospin for the decor she dreamed up for this show in the heart of the Jardin des Tuileries. 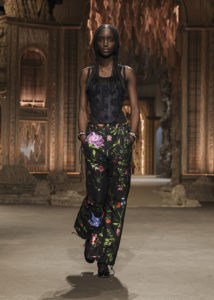 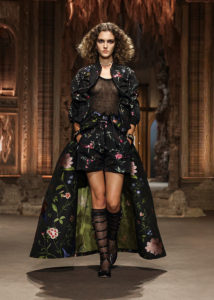 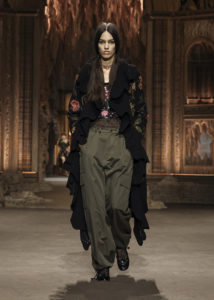 Noncompliant with predetermined existences, women are capable of exercising power in many ways, including by escaping through the mind. The power of fashion becomes the power of women, a form of awareness that draws on this attraction to the outside world, to what lies beyond perception, knowledge and common experience.

Fashion dialogues with reality through artifice; the garments of the Court are transformed. Maria Grazia Chiuri updates the corset by giving it a quasi-geometric shape that frames the bust. Thus, the guêpière , sometimes hidden, sometimes visible, outlines a silhouette reminiscent of the wide skirts worn at the court of Catherine de Medici. An ancestral tradition, raffia coats adorned with floral and bird motifs, that is also revisited with Dior’s creativity and contemporary expertise. 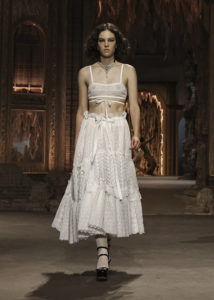 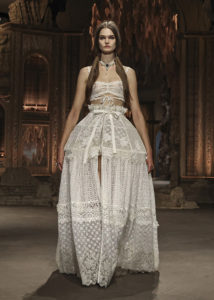 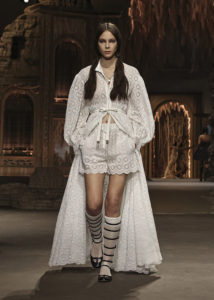 This collection pays homage to fashion as an art of invention, able to redefine the city of Paris over and over again, each and every time, allowing the multiple facets of its history to live on. Fashion as an urban concept, a showcase of clothes that color the spaces of our time; the city as a backdrop for the material and immaterial imagination of fashion and beyond. The map as a means of staging a city, of expressing the cultural complexity of our era, celebrating the power of the women who navigate it daily. 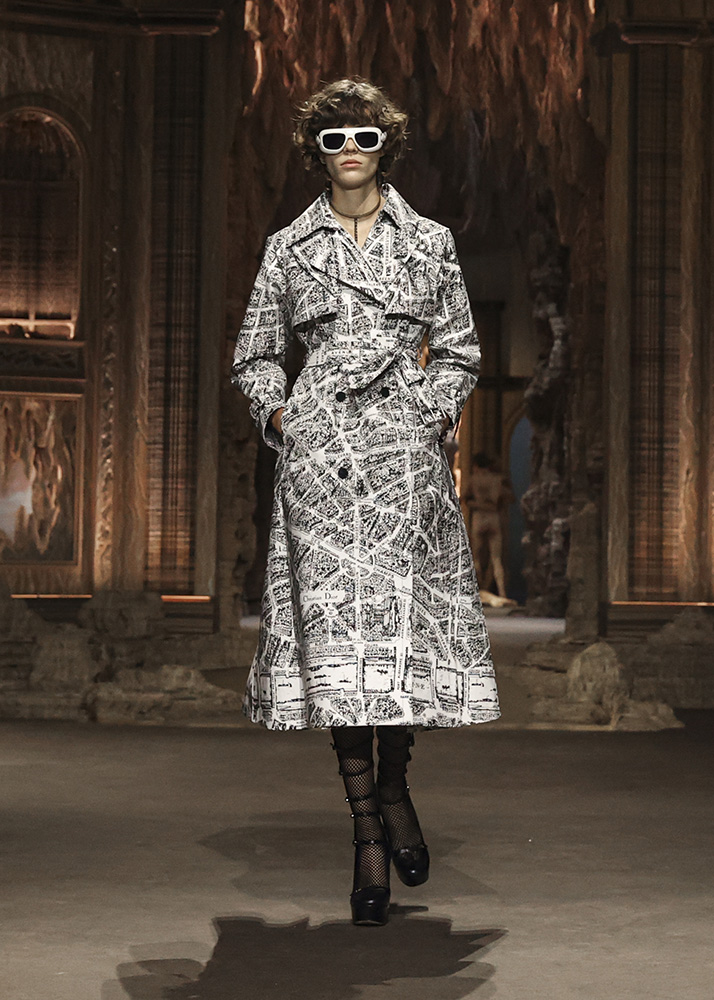 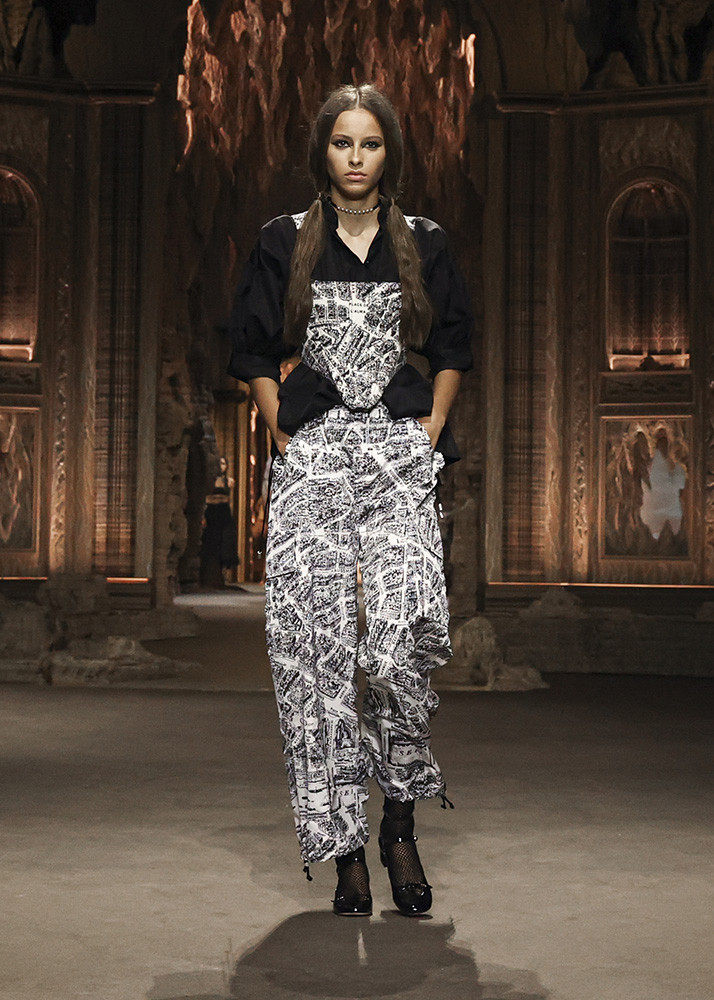 *This Dior scarf was created in the early 1950s.