MARNI opens the doors of the new Milan boutique in via Montenapoleone 26, in the heart of the quadrilateral, in conjunction with the Salone del Mobile. 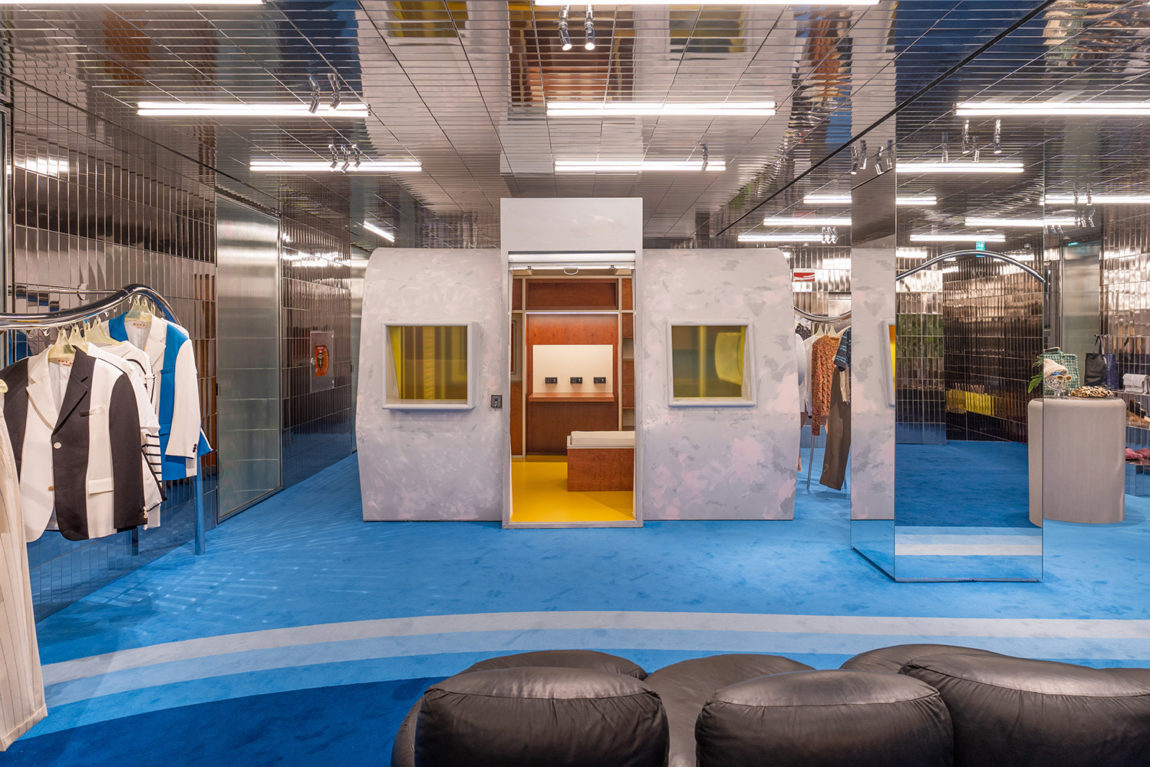 MARNI opens the doors of the new Milan boutique in via Montenapoleone 26, in the heart of the quadrilateral, in conjunction with the Salone del Mobile. The opening introduces a renewed vision of the brand’s store design, which goes beyond the traditional interpretation of a store to offer visitors a sensory journey based on discovery, pleasure and culture. Conceived as a creative hub, the new store concept was developed by the Creative Director Francesco Risso together with the internal MARNI architecture team, and is intended as a transversal cultural space where fashion design, interior design and creativity converge. 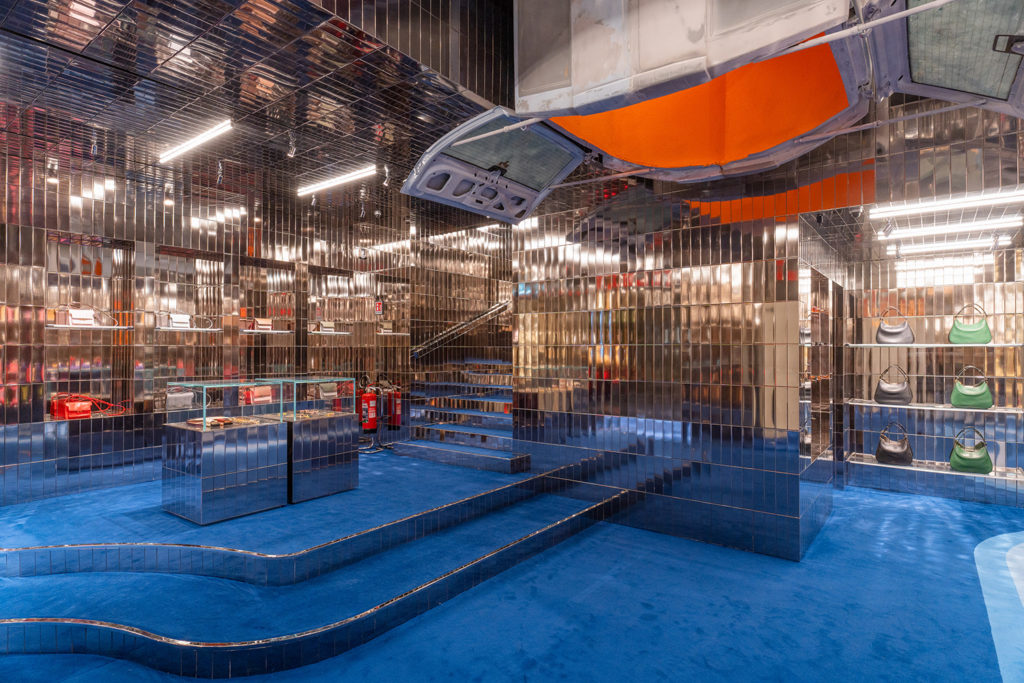 The space, which extends over three levels, acquires a new meaning, guided by a rigorous grammar of incessant architectural elements that define the tone of the boutique and the configuration of the environments.The all-over carpeted floors interact constantly with walls covered with beveled mirrored ceramic tiles, creating an eternal contrast between solidity and elusion, between the imposing presence of color and the immateriality of refractions. 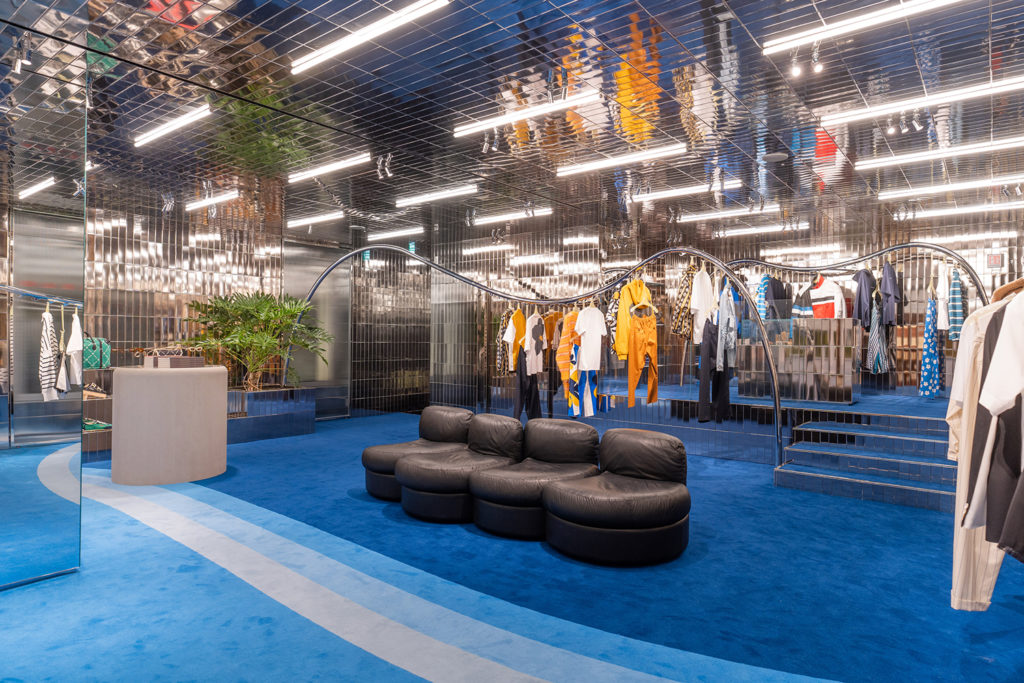 While the mirror effect is perpetrated obsessively, creating an engaging system of visual multiplications, the use of color veers in a new direction. In a decisive departure from past interpretations, in fact, an emblematic ultramarine blue tone is introduced as the only chromatic accent, a resolute gesture that enhances the palpable contrast between discipline and audacity. This Cartesian rigor of squared corners and tiled surfaces expands onto the ceilings, punctuated by neon LED bars and minimal chrome spotlights, in stark contrast to the sinuosity of the characteristic MARNI rails and the vintage modular seats located in the shop. 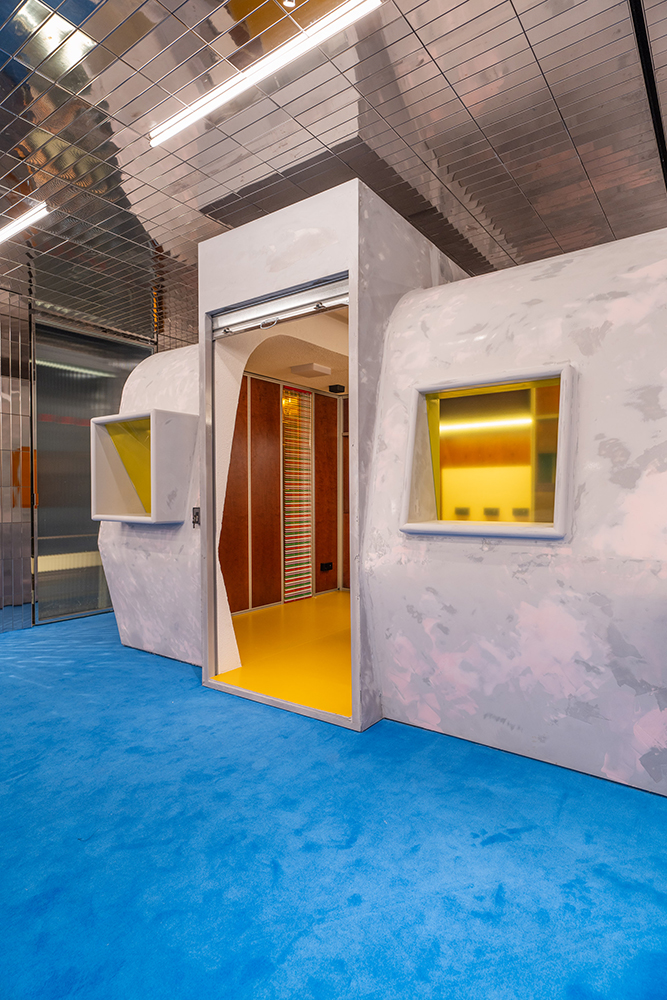 The rigorous arrangement of materials and shapes creates an architectural box which, inside, presents an enigmatic element: a “caravan of creativity”, a multifunctional free-standing installation. Intersected on three levels and accessible from the second floor, this surprising space, designed by The Wilson Brothers and Brinkworth in close dialogue with Francesco Risso, appears from the outside as a camper, which over time will host various creative personalities, invited to occupy it and bring to the inside it artistic interventions. In launching a new interpretation of the store concept, through the Milan Montenapoleone flagship, MARNI emphasizes the enhancement of materials as a medium to define the shopping experience in a current and engaging way.

On the occasion of the 2022 Salone del Mobile, the Marni Montenapoleone flagship will already host the site-specific installation by Shoplifter, a contemporary artist who represented Iceland at the 2019 Venice Biennale.