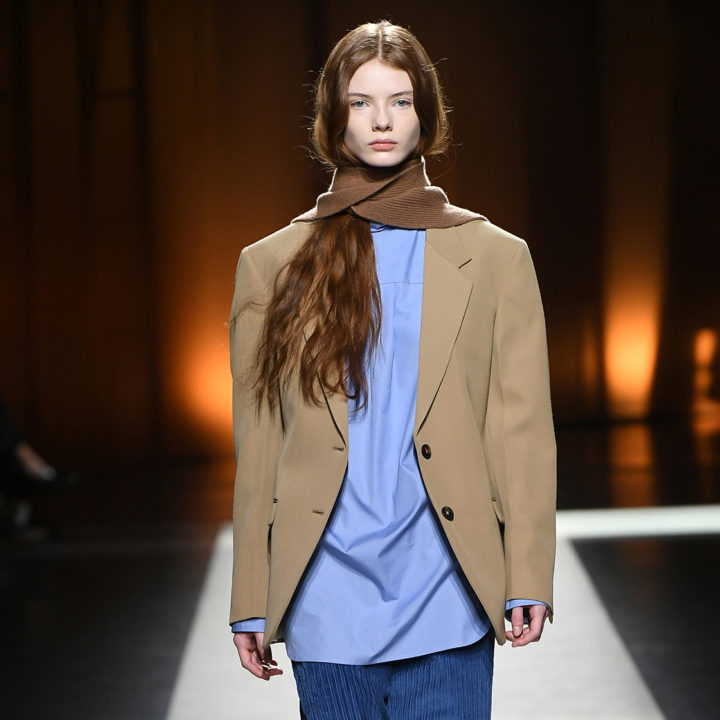 Power can be found in pleasure: combinations of elements from this lexicon of glamour express command, even force.

Tools of glamour, uniforms of beauty. For Fall/Winter 2020, a consideration of the strength of women, an emphasis on an inherent authority found in that which is intrinsically feminine. Rather than a negation of identity, a celebration. The agency of women. Progenitorial raiments of glamour and beauty serve as an aesthetic shorthand for typical definitions of femininity – synonymous with a softness, a fragility, a sensuality. Here those qualities are championed to be challenged, their reflection in visual rhetoric surrendering examples combined deliberately to contradict, undermine and propose new meaning. Paradoxically, delicacy can define strength. Tactility and animation emphasize kinesthetic awareness: vents, layered fringes and deconstructed pleats reveal skin, and underscore locomotion. Movement is tied to the corporeal, to athleticism, hence to sportswear – the clothing of everyday, today. Here, that everyday is corrupted by glamour, forms and functions challenged, shifted from practical to aesthetic. Power can be found in pleasure: combinations of elements from this lexicon of glamour express command, even force. Strict tailleurs are countered in their juxtaposition with lingerie components; minaudières, mirrored compacts, purses and bijoux – mechanisms of female self- representation – are cross-bred with utilitarian fabrications in nylon and metal, like functional tools. 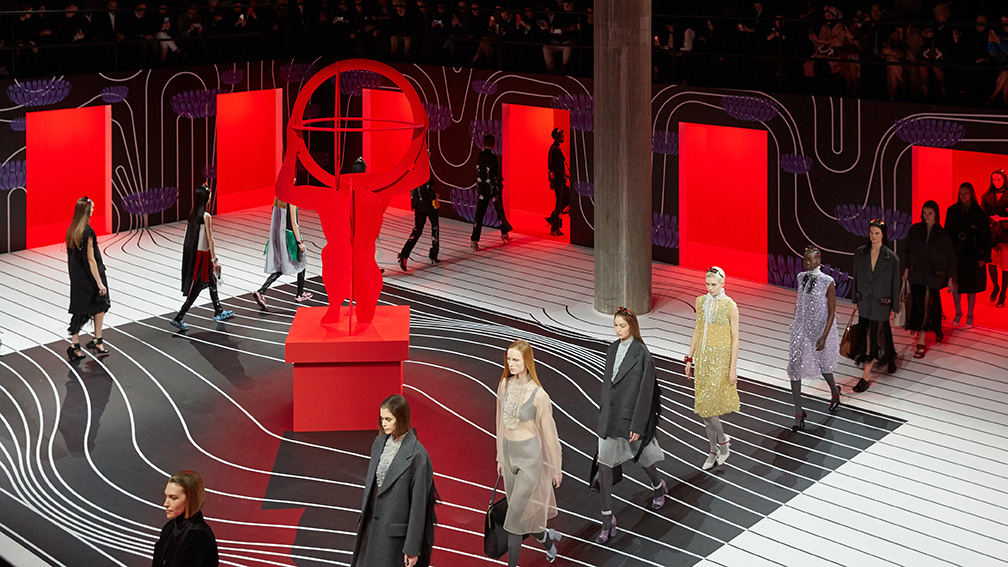 A symbol of women, flowers are a recurrent motif in varied application. The concept of the “fur coat” is exploded, imitated through shearling or fringe, its silhouette mirrored in padded nylon. Volume creates hourglass echoes of the eternal feminine, cinched at the waist. Actuality is heightened, a dreamlike state discovered in the quotidian. Colors are extreme, fabrications surreal in their incongruity. Throughout, nevertheless, there is an innate, palpable reality – a sense of the indomitability of humanity, of nature, of the continuation of life. Clothing mirrors the pluralism and complexity of female identities – of women embodying multiple ideas of the ‘self’, simultaneously. They defy any simplistic categorization – they reflect the ever- fluctuating rapport of women with their own identities. 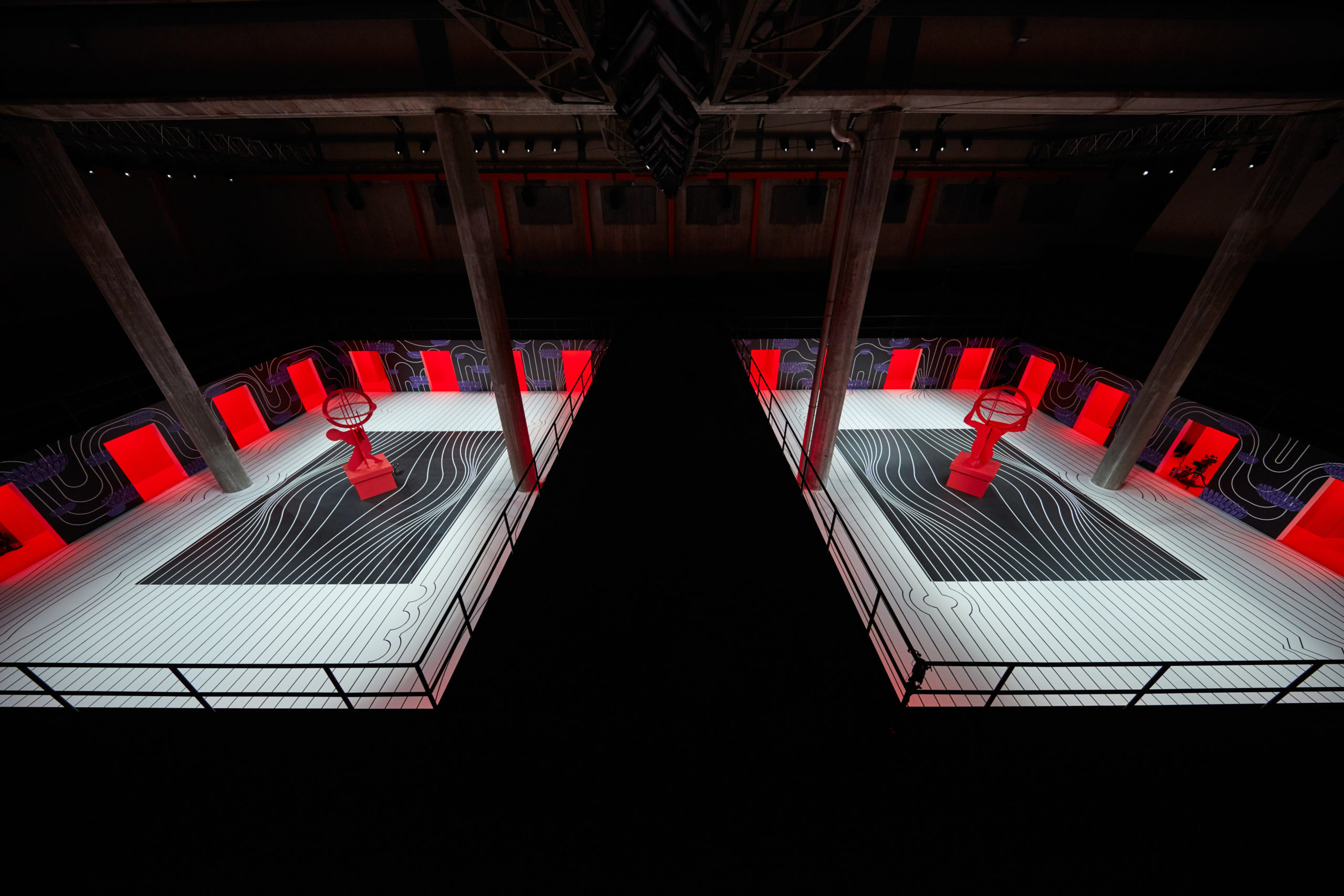 THE SHOWSPACE SET UP TRAJECTORIES

For the 2020 Fall/Winter Prada Womenswear show, AMO transforms the grand hall of the Deposito, the multifunctional venue for performances that is part of the Fondazione Prada complex, into a set of imaginary piazzas that manifest the abstract energy of the public arena. After ascending a grand staircase, guests enter the show space on a raised platform overlooking two identical voids, each containing the same fictional courtyard. 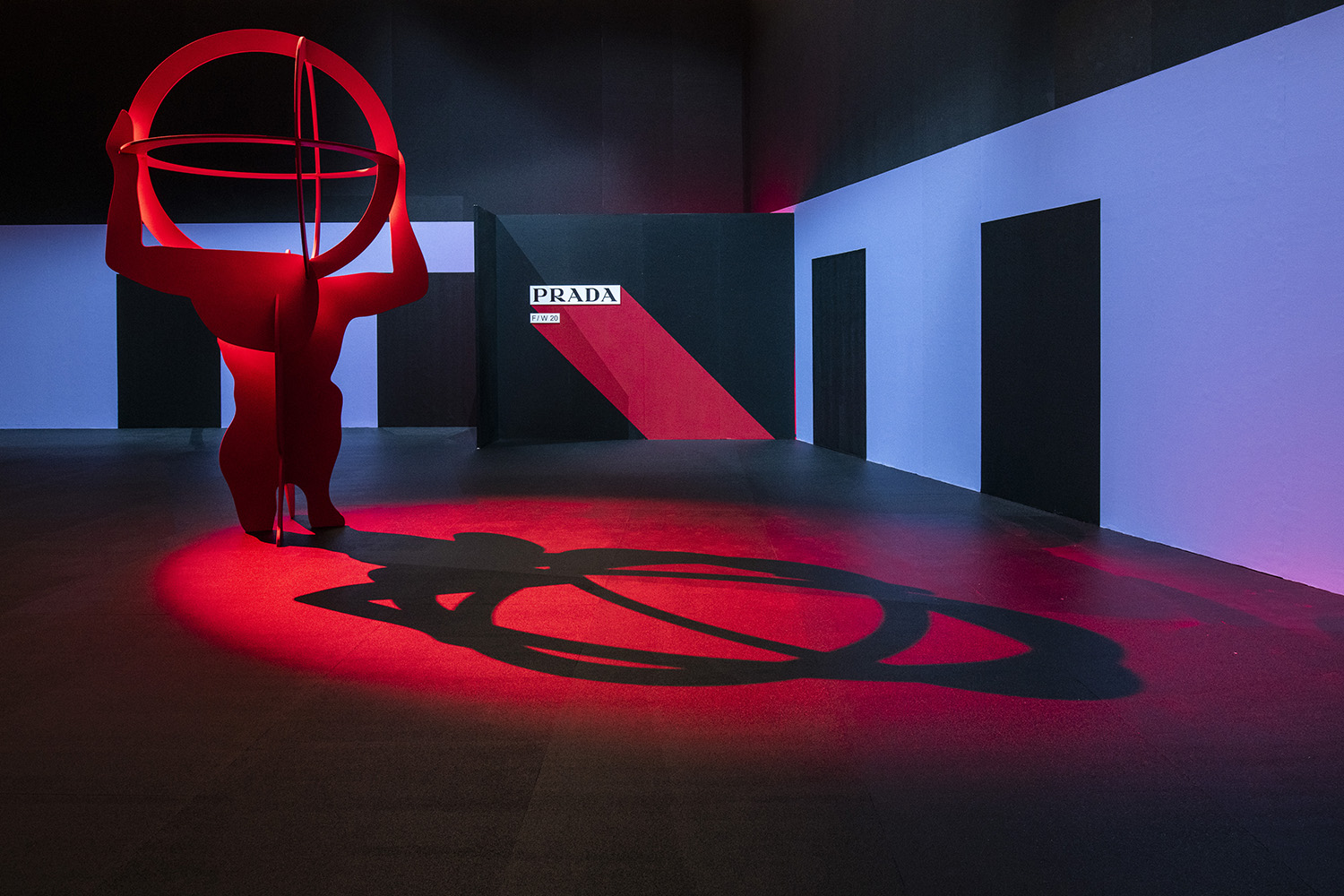 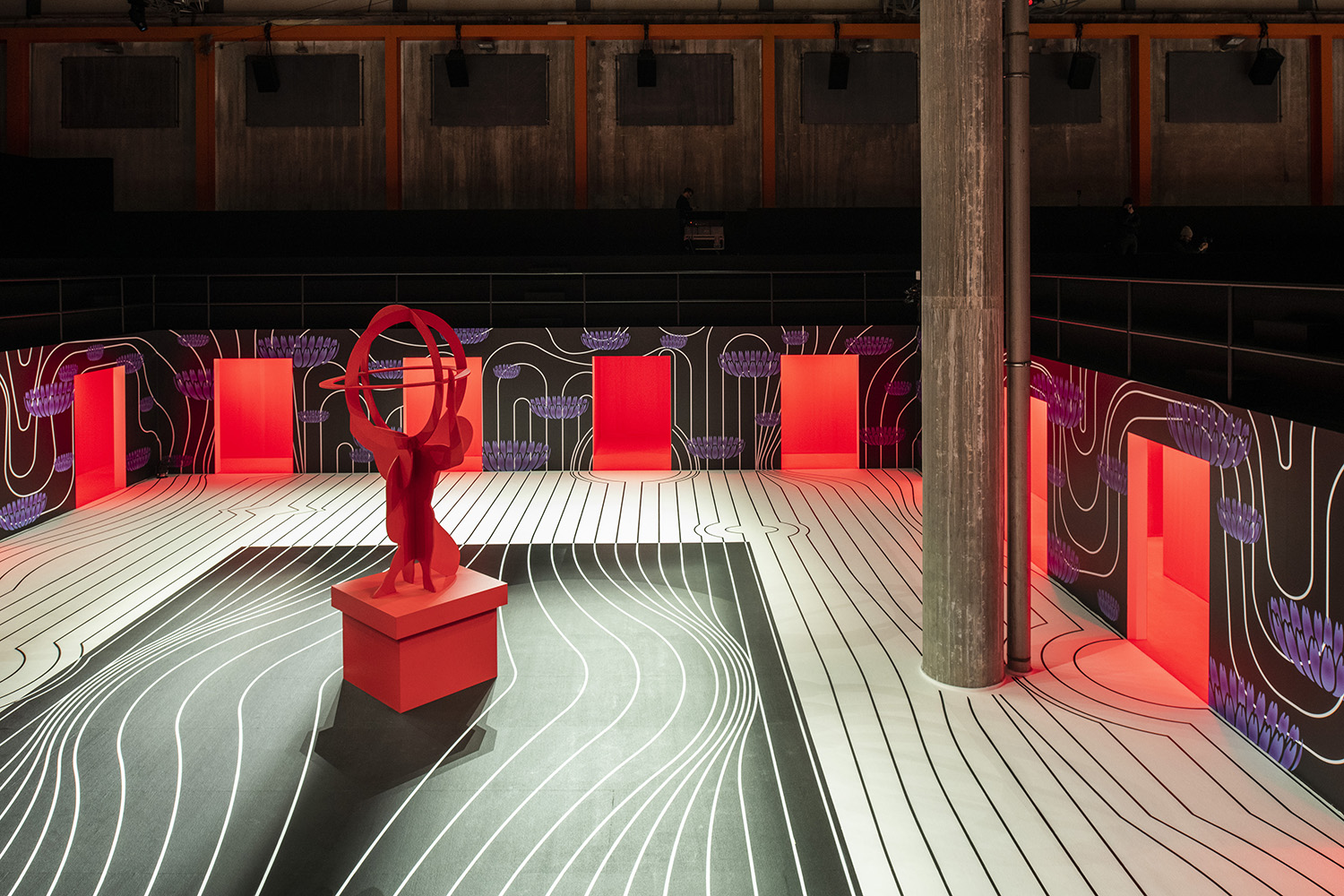 The scene is simple yet dynamic: a series of portals organized symmetrically around the courts mark a threshold between inside and outside. Sinuous graphics trace, deflect, and engage objects and openings within the courtyard, covering the floor and continuing up the wall, creating a cohesive three-dimensional space. Along the walls, boldly geometric flowers appear between the graphics, echoing the façades of Viennese Secessionist buildings. At the center of each composition is a statue of Atlas abstracted into a series of sliding and interlocking planes. Beyond the black walls at the edge of each space glows a mysterious red ether, marking both the limit and the limitlessness of the set.
The relationship between the fashion on stage and the audience gathered above is simultaneously detached and voyeuristic. Models wander through the space, appearing and disappearing, following invisible trajectories that blur the boundary between the exposed and the concealed. 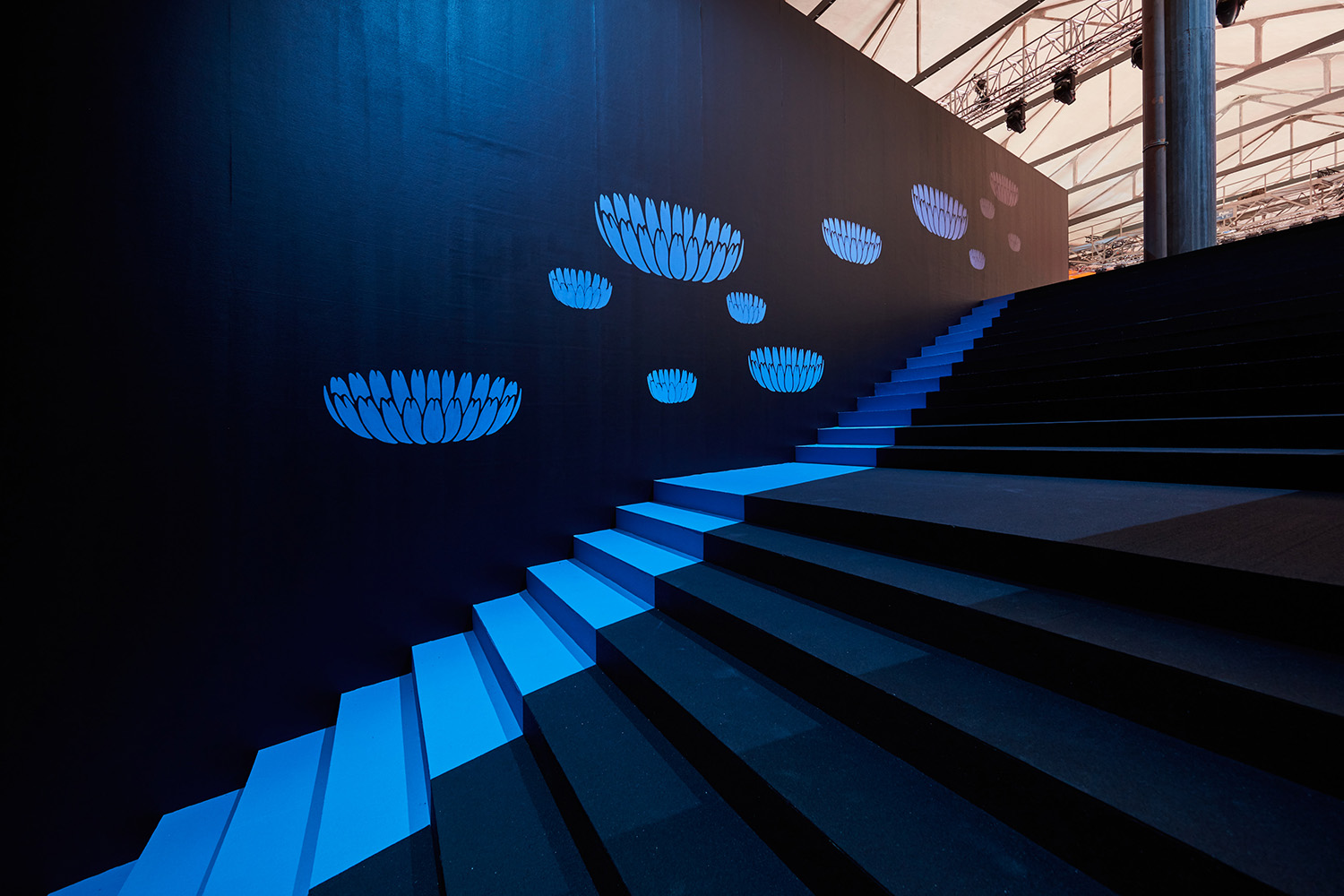