slide
grid
You can use keyboard arrows for sliding.
1
62 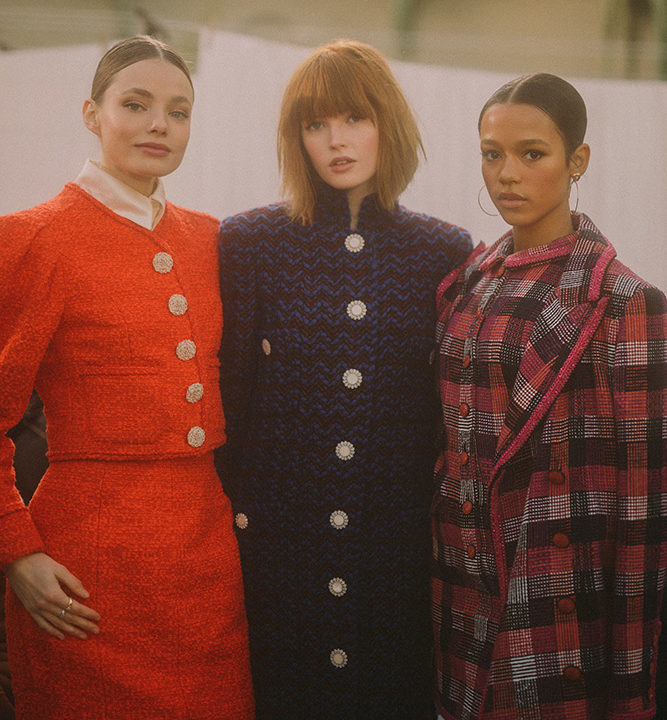 Who were the celebrity guest at Chanel SS 20 Haute Couture Show?

a paradox between the rigour of the suit and the refinement of the tweeds, between the masculine and the feminine, between black and white.

If the nave of the Grand Palais has metamorphosed in a cloister garden for the Spring-Summer 2020 Haute Couture show, it is to transport us to one of the key places in Gabrielle Chanel’s childhood. After the death of her mother in 1895, she and her sisters were sent by their father to the orphanage of the ancient Cistercian abbey of Aubazine, in Corrèze, to live alongside the other little boarding pupils. It was in this timeless place hidden from the world, that the young Gabrielle was marked for life by images, a rigour, a purity, a whole aesthetic that would never leave her, imposing itself as one of her major sources of inspiration. 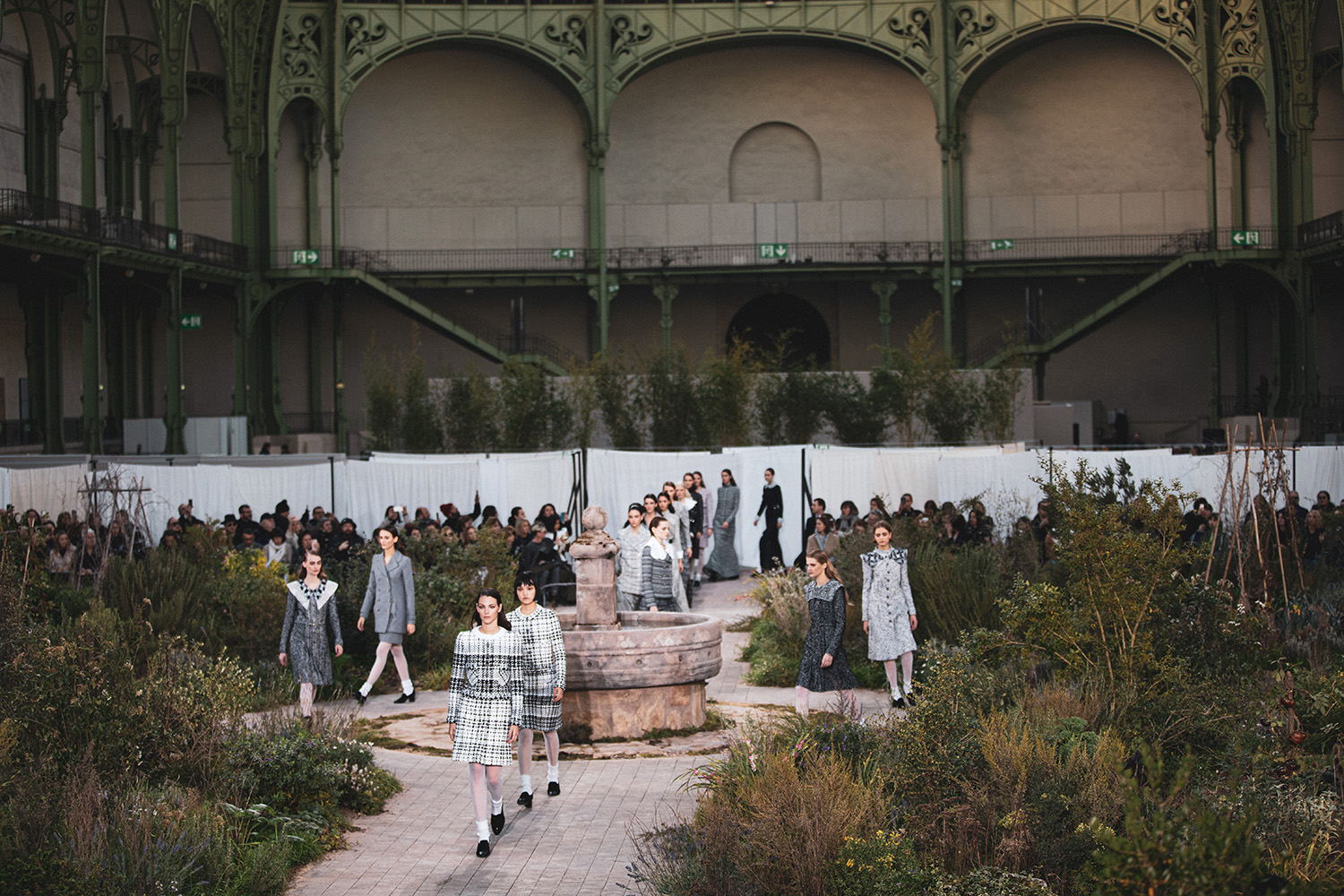 Everything in that abbey seems to have fascinated and shaped the imagination of the girl who one day would become Mademoiselle: from the paving of the corridor in the convent building, made of cobblestones that formed mosaics with the abbey’s coats-of-arms composed of the moon, the sun and the stars to the Cistercian stained glass windows whose abstract motifs could have inspired the interlacing of her own monogram. All the keys to a style were already there, marking the poetic mind of a child with their mystery.
When Mademoiselle Chanel had La Pausa built, her house in the South of France, she asked the architect to identically replicate the banister of the great stone staircase at Aubazine that she would descend daily, as a child, on her way to the abbey.

For the CHANEL Spring-Summer 2020 Haute Couture show, Virginie Viard invites us into a décor inspired by the cloister garden of the Abbey of Aubazine. A place, where Gabrielle Chanel spent a part of her childhood, which would nourish the stylistic grammar of CHANEL: the floor paved with different motifs such as stars, the stained glass windows and their geometric interlacing patterns, the rigour of the black and white habits, the collars and smocks of the boarding pupils… All these elements are subtly embedded into the silhouettes in this collection with a young and affirmed allure, shoed in sock or lace up booties and worn with white tights. On straight dresses in two-tone wool or tweed, the flat pleats, braided belts sported high on the hip, collars in cotton piqué or Bertha collars embellished with embroidery echoing the paving stones or stained glass windows of Aubazine, evoke the attire of schoolgirls. Double-breasted pea coats with their tweed skirts share the same spirit. Fastened with jewelled buttons set with stars or flowers, trimmed with braids, with a high or folded back collar, the suits in beige tweed are worn alternately with skirts that are flared or veiled in tulle. Sometimes emphasised with fine woven cords, in natural colours, they exude a countryside charm. 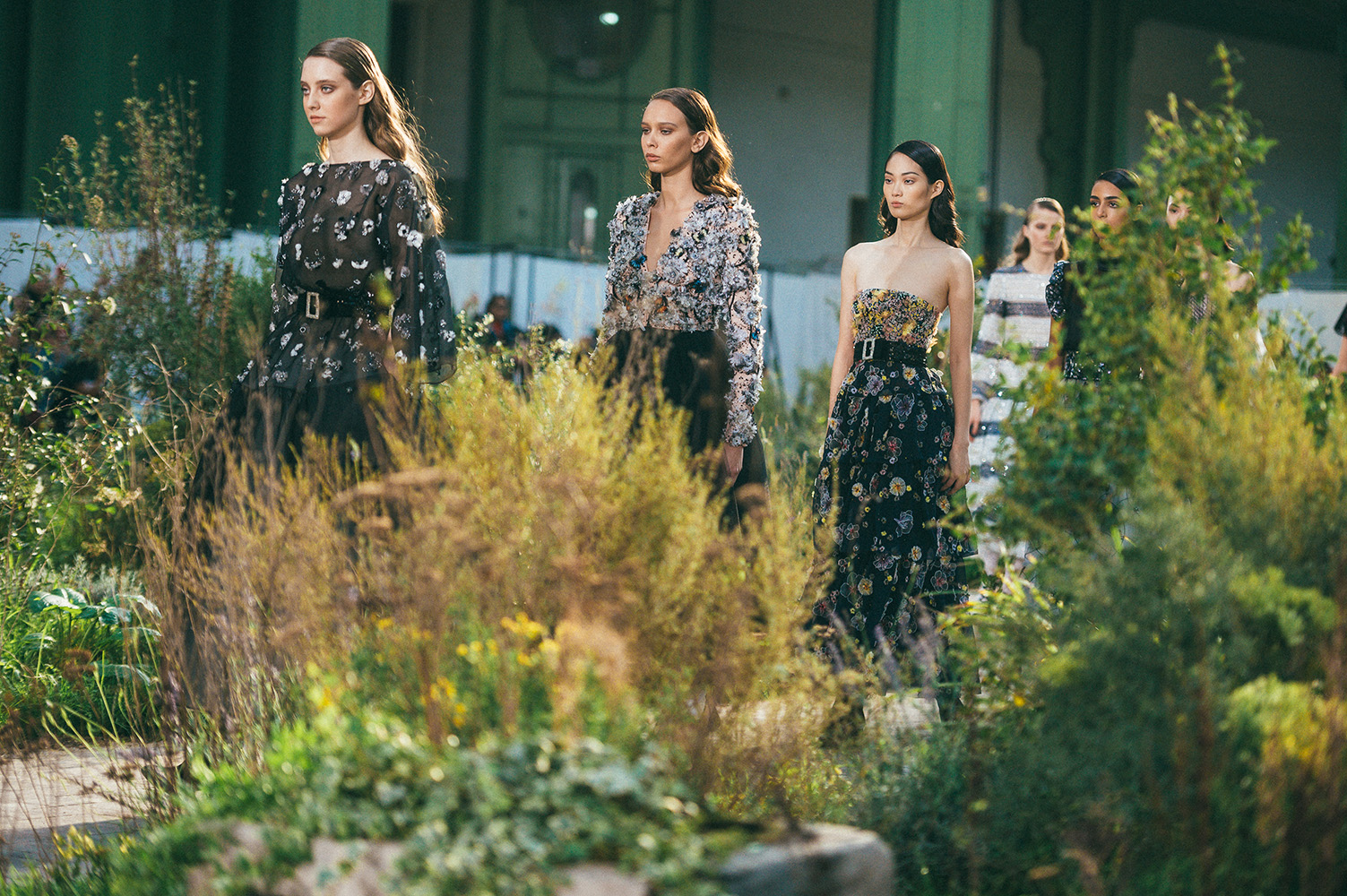 Graphic motifs inspired by the stained glass windows envelop a dress and suit entirely embroidered with matte pastel sequins, while paving stones in matte ivory sequins are embroidered over suits. The purity of lines is also sketched out over long coats: one in tweed finished with an embroidered flounced collar, others in crêpe completely adorned with an ecru floral guipure lace. Another, fastened with a Peter Pan and pelerine collar, is entirely woven from white plain-weave and gingham organza ribbons, forming a herringbone pattern. The freshness of gingham returns on a little two-tone dress in silk, sequinned over the back. Gradually, the elegant austerity gives way to a graceful lightness: a large ivory taffeta cape over a navy blue taffeta dress, a tiered dress in crêpe enhanced with a trompe-l’oeil belt embroidered entirely with sequins by the House of Lesage worn with a bolero jacket with kimono sleeves, a top and skirt in ivory flocked silk embroidered with a matte sequin paving-stone effect. A full skirt in tweed is accompanied by a cropped jacket embroidered with tiny pieces of rhodoid, painted by hand like shards of stained glass window and a cape embroidered with motifs inspired by the paving stones at the abbey. A long skirt is paired with a black sequinned tweed blazer jacket with a Bertha collar in cotton piqué. Plays of transparency are apparent in featherweight dresses. Between their layers of black and white silk tulle petticoats, they reveal a refined and very light construction, just like this dress in cigaline embroidered with little flowers. Dresses in floral lace, occasionally adorned with a criss-cross pattern, another with long sleeves and a petticoat embellished with graphic sequinned strips, or in pale pink floral-embellished lace, further diffuse this delicacy. It also appears on a dress in navy blue crêpe chiffon warmed with a tulle stole, on a full skirt with apron pockets as well as a backless dress in black chiffon with a pelerine in lace. Echoing the garden at Aubazine, flowers are reinterpreted in colourful motifs over a long pleated and buttoned dress in lace and illusion tulle. As if in an herbarium, these delicate flowers are caught inside the tulle of dresses embroidered with the intertwining circles of the abbey’s stained glass windows, and blossom as embroideries beneath the organza flounces. Multicoloured pansies flourish over a strapless dress in blue chiffon while embroidered bouquets bloom on a blue-grey organza skirt worn with a blouse in poplin and lace. The wedding dress comes in crêpe georgette, enhanced with a triple Peter Pan collar in tulle and a veil embroidered with branches of wisteria. The simplicity of this short dress reveals a pure modernity. That of the CHANEL woman, avant-gardist, daring and timeless.

check also: CHANEL Over the Moon