slide
grid
You can use keyboard arrows for sliding.
1
71 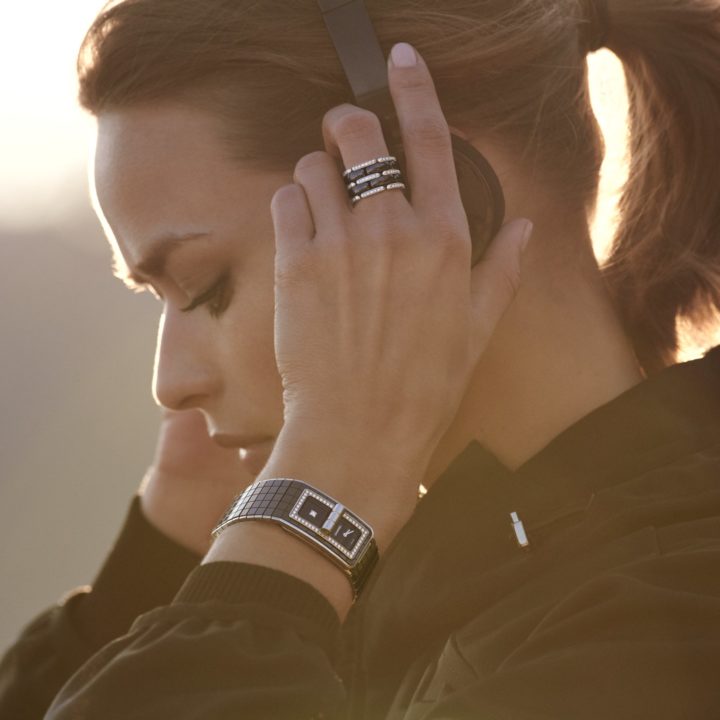 What would a rock girl for christmas want in the world of Chanel fine jewlery?

An extremely refined écrin for a collection that renders the codes and the allure of CHANEL sublime.

Who hasn’t dreamt of climbing the mythical Art Deco staircase at 31 rue Cambon in Paris, of entering Gabrielle Chanel’s apartment, of discovering this intimate, baroque space filled with her books and favourite objects, before going downstairs to attend a show in the salon? On December 4th 2019, it’s the entire atmosphere of 31 rue Cambon that has been recreated at the Grand Palais, to present the 2019/20 Métiers d’art collection. This emblematic address, the heart of CHANEL’s Fashion creation, was transposed to the nave of the Grand Palais, transformed for the occasion into a timeless space. An extremely refined écrin for a collection that renders the codes and the allure of CHANEL sublime. 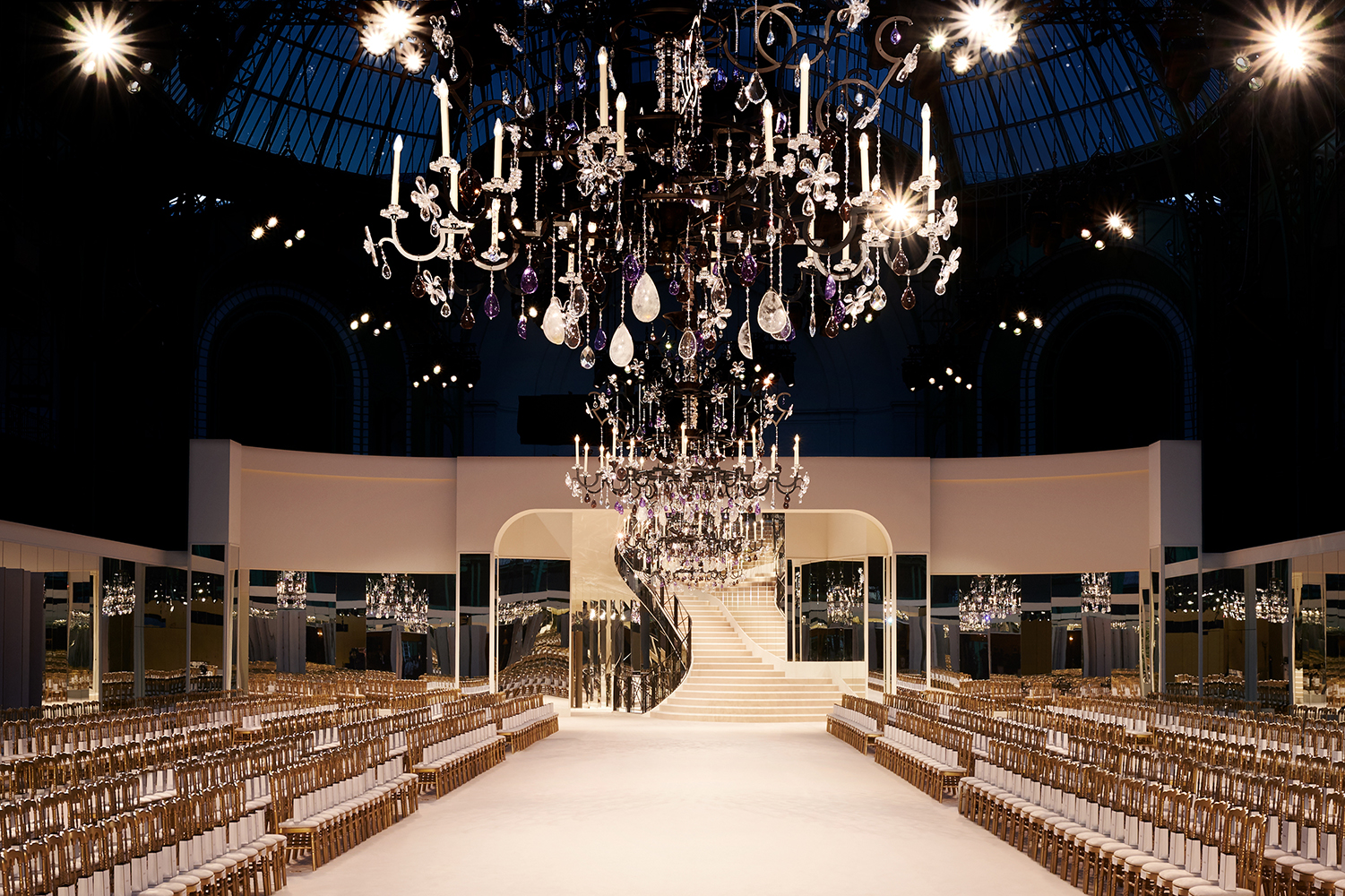 “There is a sort of simplicity in going back to Chanel’s ABC. We don’t need to do too much,” confides Virginie Viard, “I didn’t want the usual long-distance travelling of the Métiers d’art collections, I wanted to stay in Paris. So, we had to think of a new way of doing things. And then there are the codes invented by Gabrielle Chanel and made sublime by Karl Lagerfeld, which I like mixing up too. I like the idea of a patchwork. For me, it has to be on the same level as in real life. I always question the context, which has nothing to do with the way we lived decades ago: what would a woman like today? How would she wear it?” 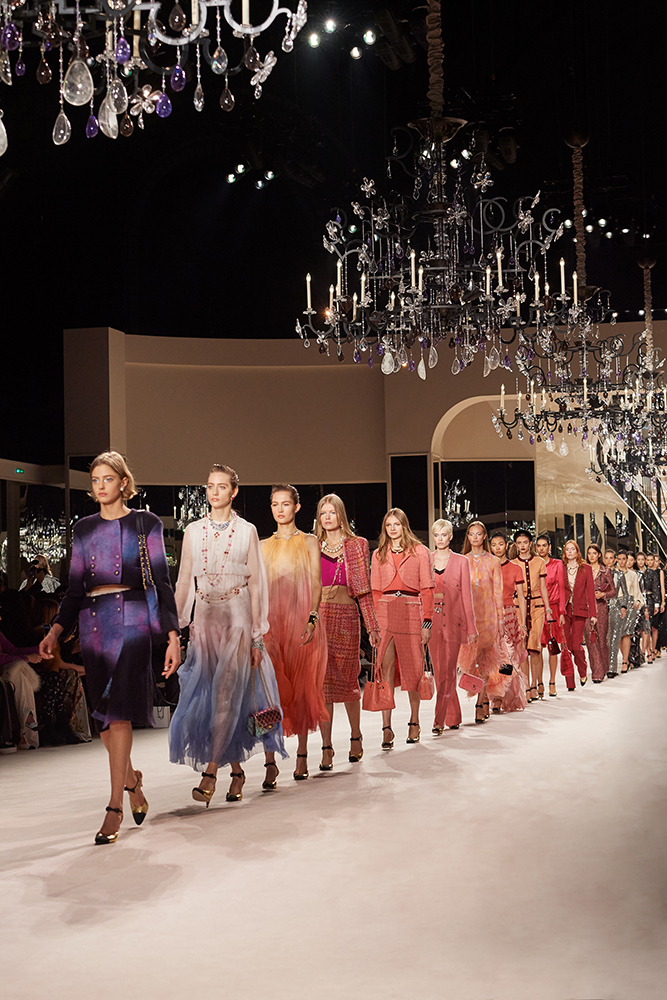 This very contemporary collection of an iconic elegance comes as jumpsuits made of tweed so fine it is as supple as knitwear, and as short suit jackets with rounded edges, worn with low waisted skirts, slit at the front to liberate legs in motion; and on the ribbon of bare skin between the two, a fine belt in chains and pearls.
A little black jacket buttons up the side, a suit becomes a dress with an asymmetric décolletage and a long pointed train attached to one shoulder, flowing down the back. Inspired by a pink tweed suit created by Gabrielle Chanel in 1960, whose lining was tie-dyed in black, blue, pink and mauve, here the tie-dye is on the outside of the tweed of several suits, and all over the chiffon of a long dress cut into a pointe, trimmed with ethereal feathers, as well as on the braids and on the iconic bags of the House, the 11.12 and the 2.55. Finally, the BOY CHANEL and CHANEL’s GABRIELLE become miniature bags which are worn as jewellery.

Emotion vibrates in the air as the models descend the white-trimmed beige steps of the grand staircase and walk through the salon. Straight, double-breasted coats in black fine bouclé cashmere with belts in long chiffon ribbons embroidered with wheat, ribbons and chains in sequins and beads, appear in succession.
Slender silhouettes pass by in a dress of embroidered black lace, neckline framed with feathers, or in a diaphanous dress of pearl-coloured lace sprinkled with tulle camellias embroidered in relief, accessorised with a minaudière in the shape of a golden cage constellated with strass, a reference to the little bird cage present in Mademoiselle’s apartment.

A long dress in white duchess satin with a pure line, worn with a cape, double-breasted black strapless dresses and a champagne-hued lace ensemble – inspired by the legendary portrait of Gabrielle Chanel photographed by Cecil Beaton in 1937 – of a sensual suppleness that swathes the body like a second skin. The silhouette is punctuated with a godet in the same lace that floats like a trail of perfume…
The camellias made by Lemarié become sculptures and completely cover little evening bomber jackets: one is quilted, with flowers made of duchess satin, with strass at their centre, and worn with black sequinned trousers; the other is white with flowers in silk pongee, their centres embroidered like jewels. 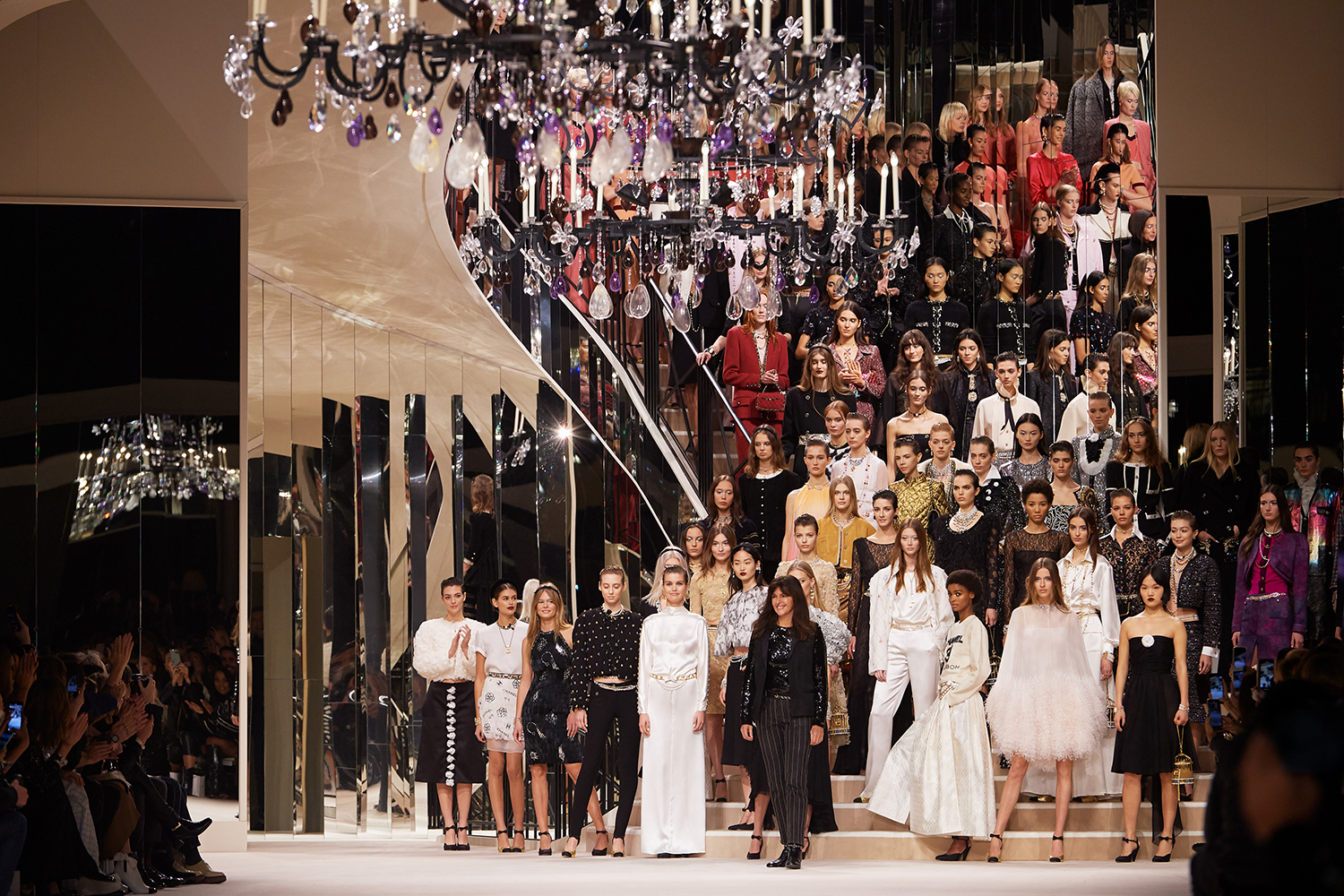 The two-tone, another CHANEL code, features on the shoes made by Massaro – like these gold leather pumps embellished with little bows with black toes – and the graphic suits that alternate black with white.
The wheat, the ribbon, the pearls are embroidered by the House of Lesage onto a precious strapless dress accompanied by a tulle coat of an exceptional refinement.
While black and gold are very present, pink appears as one of the key colours of the collection: soft pink, apricot, raspberry and even garnet on the tweed of both skirt and trousers suits, and also on a tweed jumpsuit. The suit is also revisited in a fuchsia pink satin, trimmed with braid made from an intense pink tweed, while the skirt, pleated at the front and straight at the back, imposes a fluid and liberated allure.

Diaphanous and regal, dresses in the colour of weather, as if they’ve been dipped in a summer sky as well as a long dress in silk chiffon with its entirely pleated skirt, streaked with braids made of flowers, halo the show with an otherworldly aura.

Silhouettes are accessorised with an accumulation of costume jewellery: cuff bracelets, plastron necklaces in pearls and strass from which sautoir necklaces and other pendants all seem to spark, chokers with white strass stars, while chain belts are embellished with rows of pearls, bows and camellias.

Behind this collection is the constant creative dialogue between Virginie Viard and the Métiers d’art that has lasted three decades. A vision of pure magic that, on December 4th 2019 at the Grand Palais, within a showcase of Gabrielle Chanel’s talismans, transcended the very notion of fashion to achieve a timeless elegance, allure and beauty according to CHANEL.

The actresses and CHANEL ambassadors Kristen Stewart, Vanessa Paradis, Lily-Rose Depp, Penélope Cruz, Alma Jodorowsky, Marine Vacth and Yara Shahidi attended the runway show, as did friends of the House Sofia Coppola, Marion Cotillard, Isabelle Adjani, Carole Bouquet, Angèle, Margaret Qualley and Sébastien Tellier. The show was followed by dinner at La Coupole, with a performance by the Belgian singer Angèle and a soirée at the dancing of La Coupole.