slide
grid
You can use keyboard arrows for sliding.
1
35 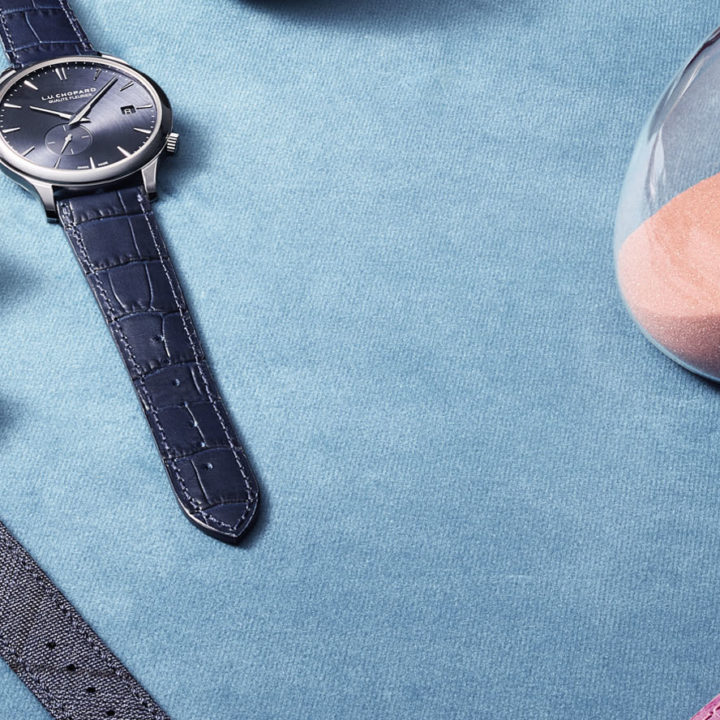 repare to be delighted. Brace for surprise. Dare to dream: an enchanting journey into a world of unparalleled beauty awaits.

Bvlgari unveils Cinemagia, its spellbinding, new high jewelry collection. A celebration of the Italian Maison’s passionate relationship with the silver screen, Cinemagia spotlights the same boundless creativity and visionary expertise at the heart of the finest films. Fueled by the larger-than-life spirit of the Eternal City, the magnificent Roman High Jeweler once more turns the impossible possible with Cinemagia. Daring, unprecedented color combinations, materials, gemstone cuts and artistry come together in the collection’s dreamlike masterpieces. Infused with a nearly magical craftsmanship, Cinemagia captures all the wonder of the movies. Prepare to be delighted. Brace for surprise. Dare to dream: an enchanting journey into a world of unparalleled beauty awaits.

BVLGARI AND CINEMA: A LOVE AFFAIR

Step into a cinema, and, as if by magic, you’re transported to a dreamland. On the silver screen, possibility is infinite. With Fellini, you might journey to the center of Rome and the splendor of the Trevi Fountain. With Scorsese, you might time travel to another decade. Sometimes, a film sends you down the veritable rabbit’s hole to a realm of pure fantasy.

Like the best of Italian filmmaking, the magnificent Roman High Jeweler is also a place of enchantment. When you cross the threshold of a Bvlgari boutique, the jewels inspire blissful delight. The sight of a decadent gem, so rare that it cannot be matched, unleashes awe and amazement. Amidst astonishing works of art, unmistakable joy and beauty are imaginable. Suddenly, like the heroine of your own film, your dreams enter a new, extraordinary dimension.

Precious stones transformed into a dream to wear: The magic of the Maison demands unparalleled ingenuity and artisanal craftsmanship. Bvlgari’s vision of beauty always begins with Rome itself. Moved by Rome’s timeless heritage of art and architecture, Bvlgari has refined, perfected and invented convention-defying techniques of jewelry making for more than a century. Every Bvlgari design bears Italian pazzia, the crazily intense passion for life that birthed the Eternal City. That Roman skill and ardor unite in the seemingly enchanted hands of Bvlgari’s goldsmiths, inimitably trained, whose works of art epitomize Roman exuberance.

The pure passion of the Italian Maison has launched thousands of dreams, including one of the world’s most enduring love stories. During the cinema’s Dolce Vita years in Rome, Elizabeth Taylor and Richard Burton sealed their legendary romance with magnificent Bvlgari jewels. In fact, the Bvlgari’s Via Condotti boutique was one of the couple’s favorite rendezvous.

Their courtship became one thread in Bvlgari’s storied history with cinema. Descending upon Rome’s Cinecittà Studios in the 1950s, Hollywood turned the spotlight on Bvlgari. Headlining luminaries from Audrey Hepburn to Anita Ekberg found the magnetic opulence of the Maison’s masterpieces simply irresistible. Compelled by the devotion of the world’s most glamorous women, Bvlgari took on a new role: the jeweler of the stars. 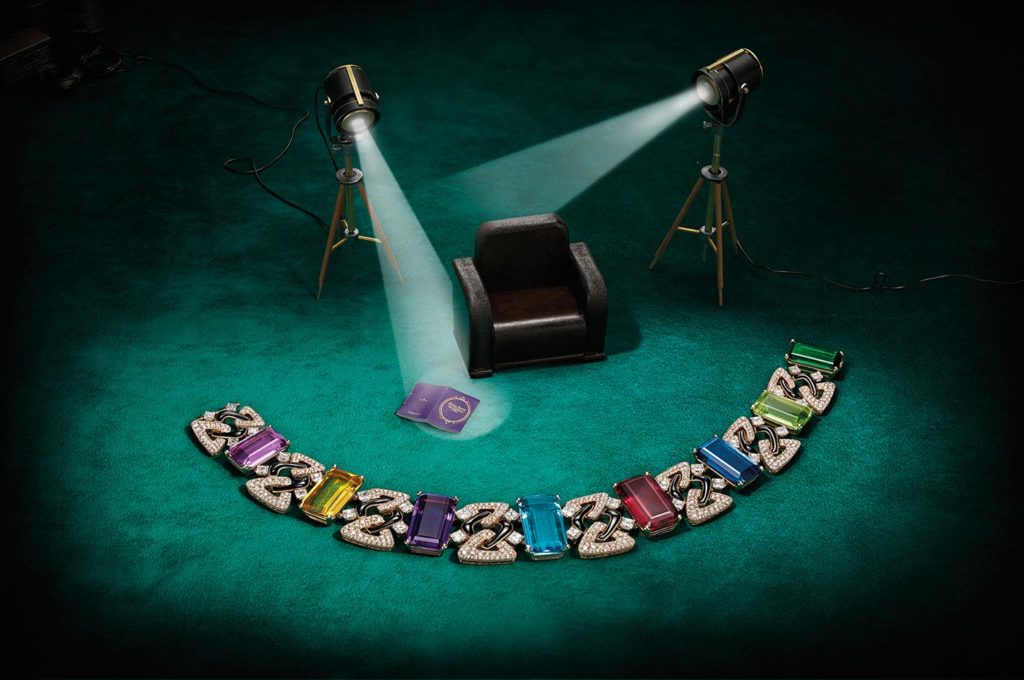 Having since starred in over 40 films, Bvlgari has a powerful legacy with daring female figures in cinema. From Ingrid Bergman in The Visit to Sharon Stone in Casino, Bvlgari and its sublime collections are linked to some of the most iconic moments in film.

And with its sparkling Roman glamour, Bvlgari has invitably cemented some of the most memorable red carpet entrances. At the 2002 Oscars, Nicole Kidman absolutely dazzled in a custom rough-cut diamond necklace, a piece created in collaboration with the actress. Other stars rely on Bvlgari’s incomparable archive: At the 2016 Oscars, all eyes were on Kiera Knightley’s vintage bib necklace, a sensational jewel originally created for the Shah of Iran to gift to his wife Princess Soraya. Colorful Heritage pieces and new Bvlgari jewels came together in Lupita Nyong’o’s absolutely riveting Met Gala look this year. In addition to a phenomenal emerald, amethyst, ruby and diamond necklace, the actress debuted a 10-carat, cushion-cut sapphire ring from the new Cinemagia high jewelry collection.

Today, Bvlgari’s relationship with the cinema has become a global affair. Supporting the art of movie making from the East to the West, the Roman High Jeweler has sponsored festivals such as the Berlinale, the Cannes Film Festival, La Biennale di Venezia and most recently, the Shanghai International Film Festival (SIFF). The SIFF, China’s premier film festival, is considered one of the biggest cultural events in the Asia-Pacific region, making Bvlgari’s partnership for the third year running a true honor.

Making dreams come true at every turn, Bvlgari also directly supports the passion and perseverance of filmmakers. To celebrate and connect the incredible cinematic history of the Maison with the leading contemporary voices of today, Bvlgari—the Official Jeweler of the Tribeca Film Festival—has partnered with Tribeca Studios on a multi-year short film series highlighting exceptional women who are breaking boundaries and shattering cultural norms. “Bvlgari is delighted to have the opportunity to celebrate extraordinary Italian women who like the brand, are bold, daring and larger than life,” said Jean-Christophe Babin, Chief Executive Officer Bvlgari Group. Like every dream maker, Bvlgari is a storyteller at heart. 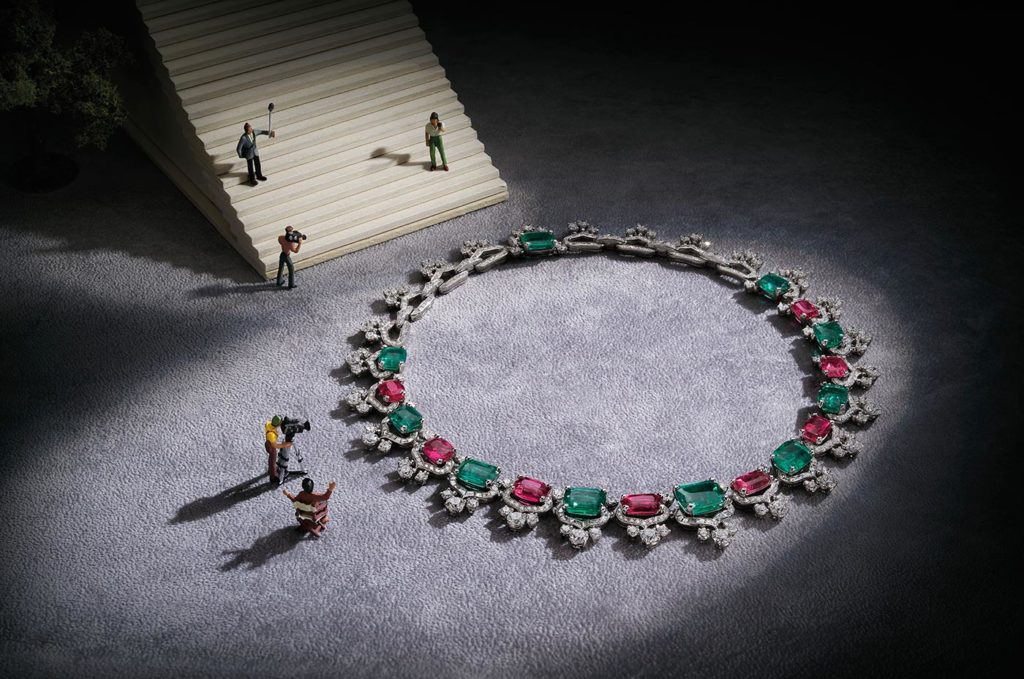 THE HIGHLIGHTS OF THE CINEMAGIA COLLECTION

Artfully fashioning gems into a new height of glamour begins at Bvlgari’s High Jewelry workshop in Rome: Limitless imagination. Immeasurable technical ingenuity. Inexhaustible passion. These Roman values drive a new, daring level of artistry in Cinemagia. Just one majestic statement necklace demands more than 500 hours of work and pushes the boundaries of jewelry design with singular innovations. The result is inestimable: a masterpiece that turns its wearer into a captivating, scene-stealing star.

“Three. Two. One. Action!” Four little words are all it takes to mobilize an entire movie set, and the epic adventure of Cinemagia naturally begins with action, too. The Action! necklace celebrates the groundbreaking invention of celluloid in 1885. Known for its cutting-edge daring, Bvlgari marks the event with its own innovation, the introduction of zirconium. An entirely new metal in high jewelry design, zirconium has a striking black-silver sheen that impeccably renders an old piece of film. Involving more than 800 hours of work by a single goldsmith, the Action! necklace remarkably features the flexibility of film, though it’s encrusted with 32 carats of pavé diamonds. Rule-breaking, visionary, dazzling and entirely surprising, the Action! necklace is quintessential Bvlgari and consummate Cinemagia. 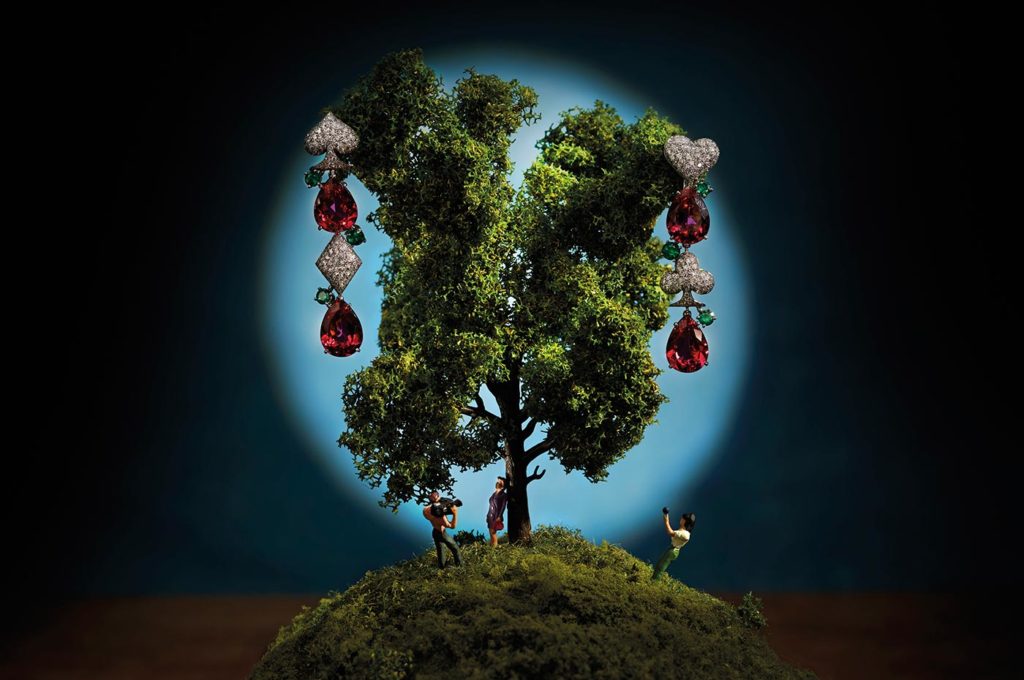 The Action! of film whisks the moviegoer to legendary lands, and one of the most fabled is the Emerald City in the The Wizard of Oz. “It’s a place that stands out for its jewel-like brilliance and for the hope it awakens. For Dorothy and her friends, it is the destination of salvation and happiness,” says Lucia Silvestri, Bvlgari’s Creative Director. The enchanting magic of the metropolis is captured by the Emerald City necklace, featuring a showstopping 21.49-carat emerald. Around the stunning stone, rows of triangular prisms, set with pavé diamonds and emeralds, evoke towers. The sumptuous piece is designed to leave you as awestruck as Dorothy at her first glimpse of the city’s vibrant, green skyline.

The Emerald City is a fitting starting point: Exceptional emeralds are a specialty of Bvlgari, a renowned master of colored gems. Like an A-list actress elevates a film, a one-of-a-kind gemstone instills a jewelry design with matchless glamour. As Lucia explains, “In some films, an actress can play such a real, memorable and intense role that the character starts to live beyond the movie itself. The same can happen in the world of jewelry: Sometimes, there is an extraordinarily rare gemstone with an inner glow that can’t be found twice in nature. Its uniqueness defines the entire character of a design.” 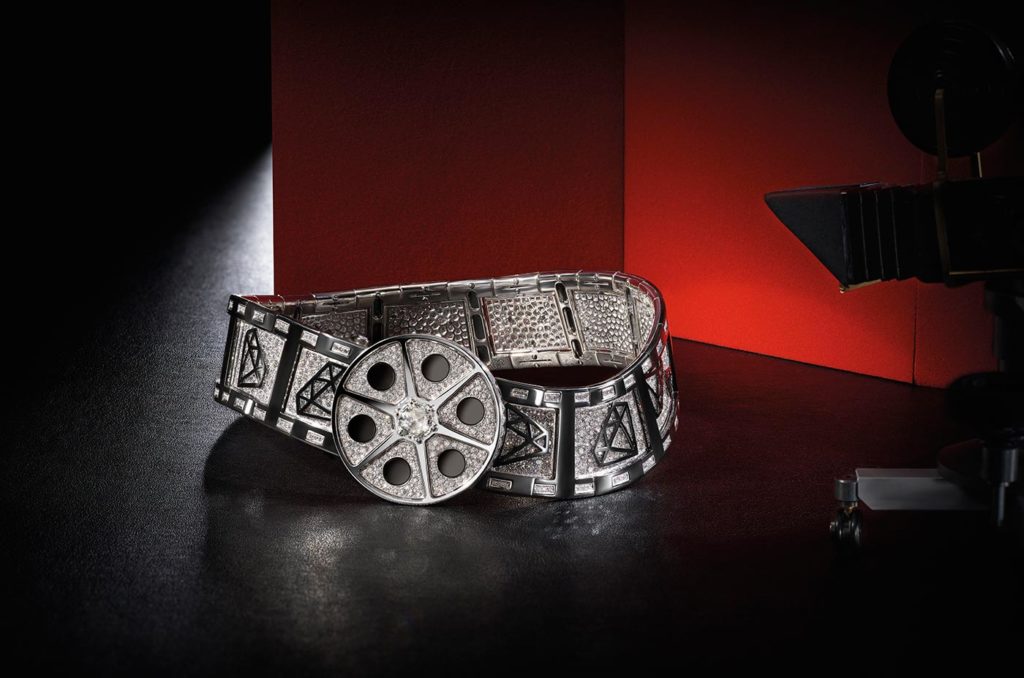 In step with the larger-than-life spirit of the Italian Maison, these exquisite emeralds bring their star power to pieces tailor-made to showcase their radiant hues. In the case of the Forever Emeralds necklace, the 24.31-carat emerald announces itself as a diva in its own right, as it hangs with a flourish from an emerald-and-diamond choker set in a captivating geometric design.