Nicolas Ghesquière continues his architectural journey in the iconic TW62 Flight Center of 1962, one of the most creative airport terminals in the world. 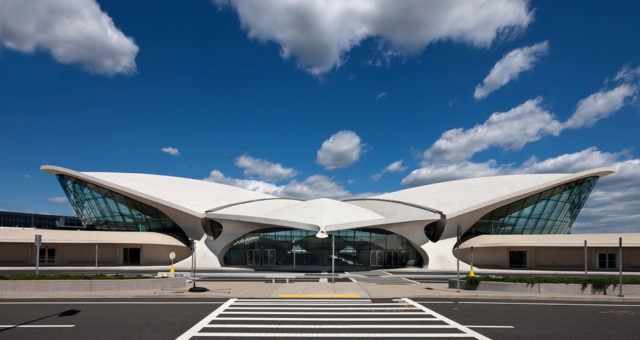 The next Louis Vuitton Cruise fashion show will take place on May 8, 2019 in the TWA Flight Center, located within John F. Kennedy International Airport

After Monaco, the Bob & Dolores Hope Estate in Palm Spings, the Mac Niteroi in Brazil, the Miho Museum in Japan and the Maeght Foundation in the French Riviera, Nicolas Ghesquière continues his architectural journey in the iconic TW62 Flight Center of 1962, one of the most creative airport terminals in the world.

Famous for following the exploratory and experimental aspect of design, the Finnish naturalized American architect, Eero Saarinen created this masterpiece of modern architecture from the 1950s, a winged structure of eighteen thousand square meters, at the dawn of the Trans World Airlines Jet era .

Designated as a milestone in the city of New York in 1994 and listed in the National and New York Historic Places Register in 2005, the TWA Flight Center was closed in 2001 and is currently under renovation and will become the heart of TWA Hotel 512 rooms.

Louis Vuitton will be the first fashion house to stage an event in the monument restored before the opening to the public, on May 15, 2019. The TWA Flight Center, itself a true evocation of the journey intrinsically linked to Louis Vuitton’s commitment in search for exclusive architecture and the art of travel and represents a close link with the inspirations of Nicolas Ghesquière.