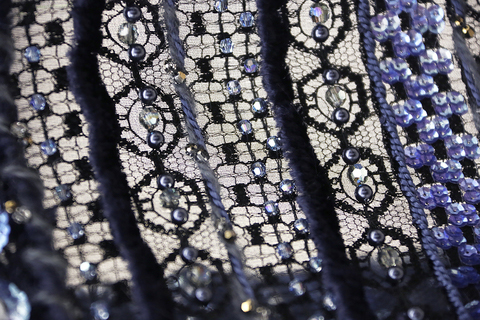 For the first time, the Michelangelo Foundation, which seeks to support artisans, has organized a cultural exhibition called “Homo Faber”. Showcasing the best European artisans, the first edition welcomes Maison Lesage and embroidery house will be showing the broad scope of its virtuosity, its savoir-faire and its capacity for innovation.

As part of the Homo Faber exhibition, a participative embroidery workshop will be held on the ground floor where members of the public can collaborate with professional embroiders there to guide and instruct on a vast collective work of art: an immense canvas depicting a map of Venice as seen from the sky.

The House of Lesage is an important name in the world of fashion since 1924 when Albert and Marie- Louise took over the atelier that had belonged to the embroiderer Michonet. The embroiderer of art has always been in a constant state of innovation. Inventor of new techniques, like the vermicelli straight yarn and the shading system for muted tones, prodigious and prodigal, it has accompanied the history of fashion and its biggest designers, working with Elsa Schiaparelli, Christian Dior, Pierre Balmain, Madame Grès not to mention Cristóbal Balenciaga, Yves Saint Laurent.

Since 2002, the House of Lesage has been part of Paraffection, a structure created by the House of CHANEL to preserve and perpetuate the Métiers d’Art. The uncompromising complicity, since 1983, between the House of Lesage and Karl Lagerfeld is like a virtuous circle, which, from the Haute-Couture and Ready-to- Wear to the Cruise and Métiers d’Art collections, pushes the ateliers to go ever further in their quest for crea- tivity and perfection. As Hubert Barrère, Artistic Director of the House of Lesage, explains “For each collection we work very closely with the Creation Studio at Chanel. There is a creative dynamism that pushes the artisans to test the limits of their imaginations, to reinvent sophisticated new details each season, to ensure we always surprise”.

The exhibition opens on September 14 and lasts until September 30, 2018 at the Giorgio Cini Foundation on the San Giorgio Maggiore island in Venice.