slide
grid
You can use keyboard arrows for sliding.
1
55 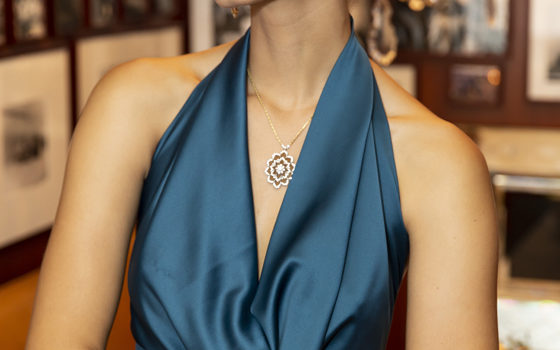 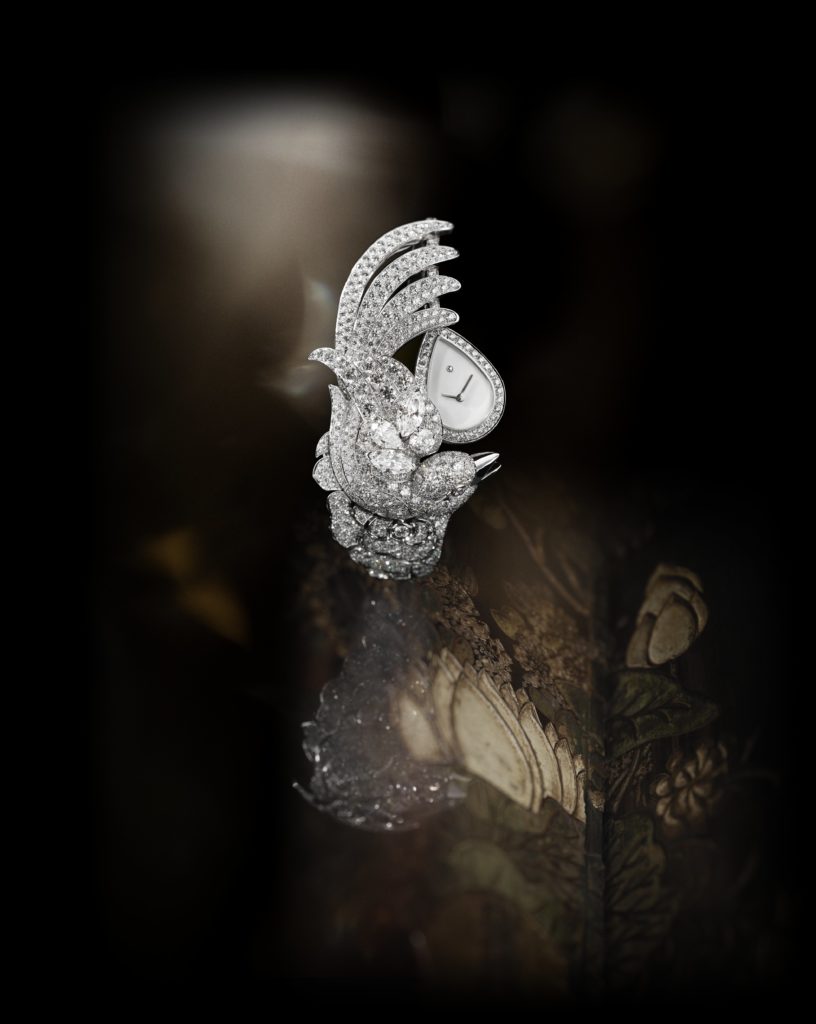 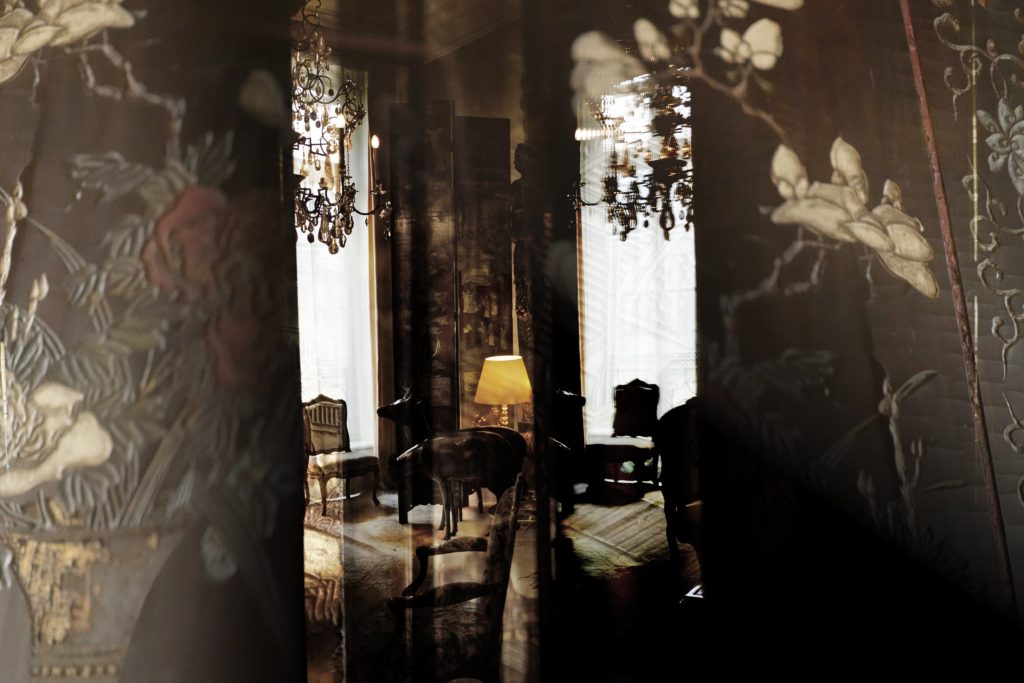 “THE FIRST TIME I SAW A COROMANDEL SCREEN, I CRIED OUT: IT’S SO BEAUTIFUL! I HAD NEVER SAID THAT ABOUT ANY OTHER OBJECT.”

Gabrielle Chanel lived in a lacquered box where sailing ships, palaces, flowers and birds, in flashes of gold and deep red, stood out against the darkness of the night. This dream landscape held such charm for her that she wished to always keep it with her: it was that of the Coromandel screens, which she discovered in the 1910s, with her great love, Boy Capel. The screens followed her from her mansion on Avenue de New-York; to the Rue du Faubourg Saint-Honoré in 1923; to her suite at the Ritz Paris; and then her villa in Lausanne in 1968. She never became tired of searching for new ones, and, at one point, owned more than thirty. Some she gave away, but she always ensured to keep enough for herself, to, in her words, “upholster my home.”
“I’m like a snail,” she confided to Claude Delay. “I carry my house with me… Two Chinese screens, books everywhere. I’ve never been able to live in an open house. The first thing I look for is screens.”
Trestles of privacy, the Coromandel screens provided a daily decor that she could easily move from one space to the next, cut, stick, detach, reduce, and transform according to her needs and desires. She would attach photographs and drawings by her artist friends, forming a background web for the imaginary theater in which she liked to immerse herself.
“When I look at this screen in the evening, for example,” she continued, “I see doors opening and knights setting off on horseback.” … The Coromandel lacquers evoke images of mythical China, Imperial Cathay and the Coromandel Coast of East India – from where these screens departed for Europe and to which gave them their name. They also conjure up Marco Polo’s Book of Wonders. His Venetian birthplace, the gateway to the Orient, one of Chanel’s favorite places, which she often visited with her friend Misia and her husband, the extravagant José-Maria Sert – another connoisseur of subtle lacquers, who encouraged Chanel’s taste for the baroque and the opulent.
Still today, when entering Chanel’s apartment at 31 Rue Cambon, it is impossible not to be caught up in the mirage of the décor. The 17th- and 18th- century screens mask doorways, surround the fireplace and sofa, and, reflected in the mirrors and rock crystals, appear to be multiplied to infinity: an imaginary labyrinth that stretches across the oceans and the centuries. 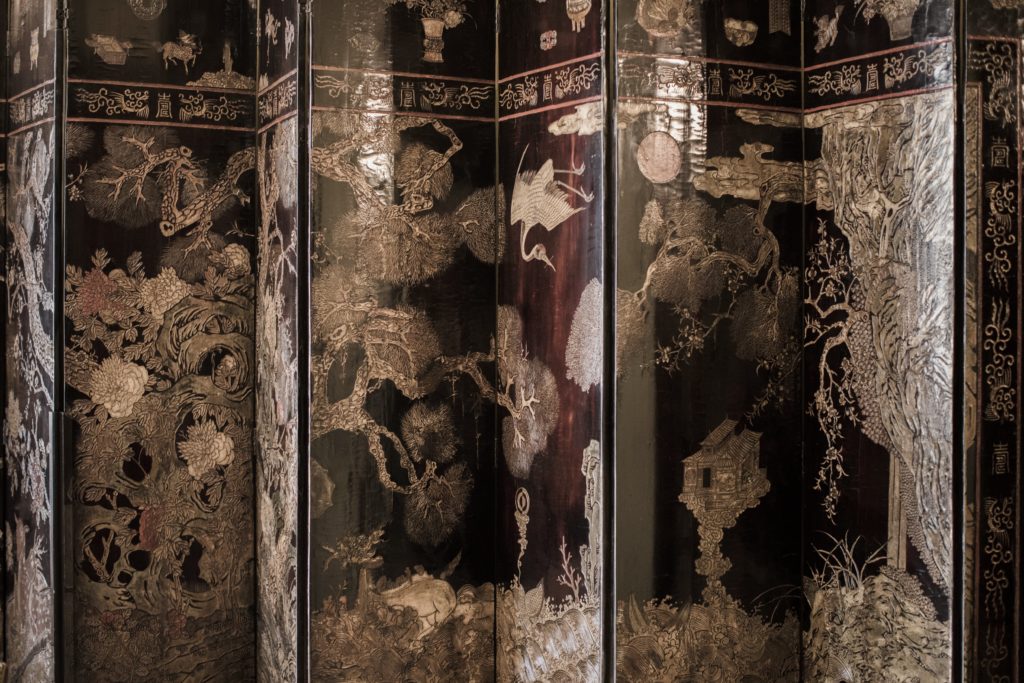 In the 17th century, sailors under Louis XIV would cast off from Brest or Bordeaux to skirt around Africa, steer clear of the French and Bourbon isles, and head toward the coast of Cholamandal, on the Eastern side of India, transformed by foreign tongues into “Coromandel.”
They went in search of the pearls and jewels recounted by Marco Polo in his Book of Wonders, but, instead, met Chinese merchants, who had traveled from the court of the Emperor Kang Xi. Their Junks contained fabulous objects – jades, porcelains, ornaments and screens covered in lacquer – a technique as yet unknown in the West. The lacquer was made from a vegetable resin that was heated, filtered, purified, and then meticulously applied onto the wood in successive layers, dried and polished, and then repeated, until the lacquer reached a thickness of three millimeters. It was this that ensured the lacquer’s hardness and incomparable shine. Some lacquers required more than thirty applications. This ancient method was called “Kuan Kai” (“incised colors”), a reference to the designs and motifs made by incrusting precious stones and mother-of-pearl into the lacquer. These Chinese lacquers became extremely sought-after in 17th- century Europe, before they were replaced by the less-sophisticated “Vernis Martin” technique in the following century. 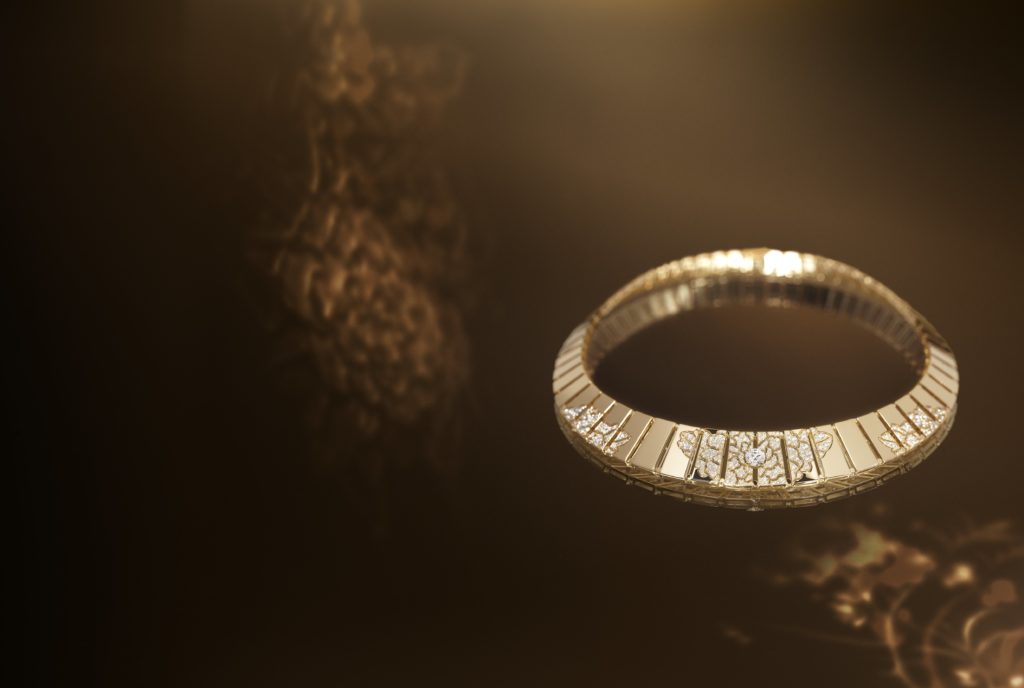 In 2018, CHANEL Fine Jewelry presents, for the first time, a Fine Jewelry collection inspired by the poetic universe of Coromandel.
The COROMANDEL collection is made up of fifty-nine pieces, with twenty-four that are entirely unique. The motifs dear to Gabrielle Chanel are reworked around three themes: floral, noticeably evoking her signature flower, the Camellia; animal, through the bestiary of Coromandel; and mineral, reflecting her love of crystal and gemstones.
The floral theme inspires a cuff that is entirely reversible, and reworks the geometric structure of the screens. The cuff includes a yellow diamond that pivots, so as to remain always visible on the wrist.
The mineral theme is inscribed in the “Horizon Lointain” plastron necklace in yellow gold, dotted with clouds of mother-of-pearl and diamond (including one central sixcarat diamond) that evoke a Coromandel landscape.
At the heart of the animal theme, birds just about to take flight, just as they appear on the screens, ornament a diamond ring that sparkles with more than ten carats.
Finally, the collection’s gems recall all the colors of the Coromandel lacquers: the greens of the Tsavorite garnet, emeralds and the more than thirty-seven-carat tourmaline on the “Vibration Minérale” ring; the red spinel on the “Évocation Florale” ring, and the ruby beads and deep, hypnotic black lacquer transposed onto the onyx.
These magical and virtuoso pieces offer, once again, an illustration of the incomparable savoir-faire of the CHANEL Fine Jewelry workshop, and the tireless ingenuity of the Studio of Creation, inspired by the secret and precious universe of Gabrielle Chanel. 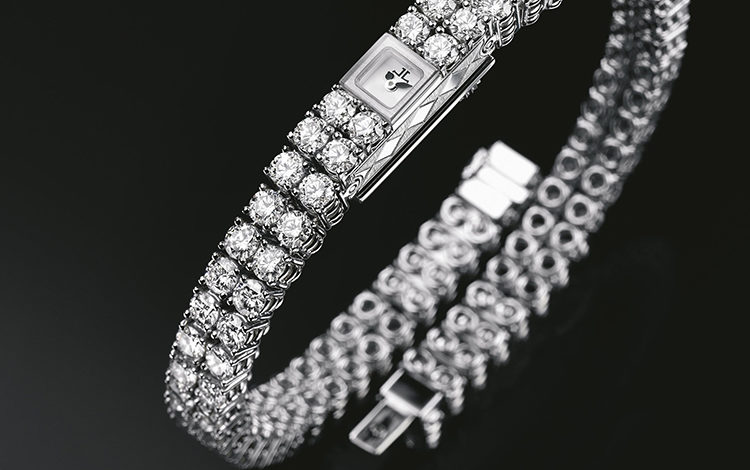