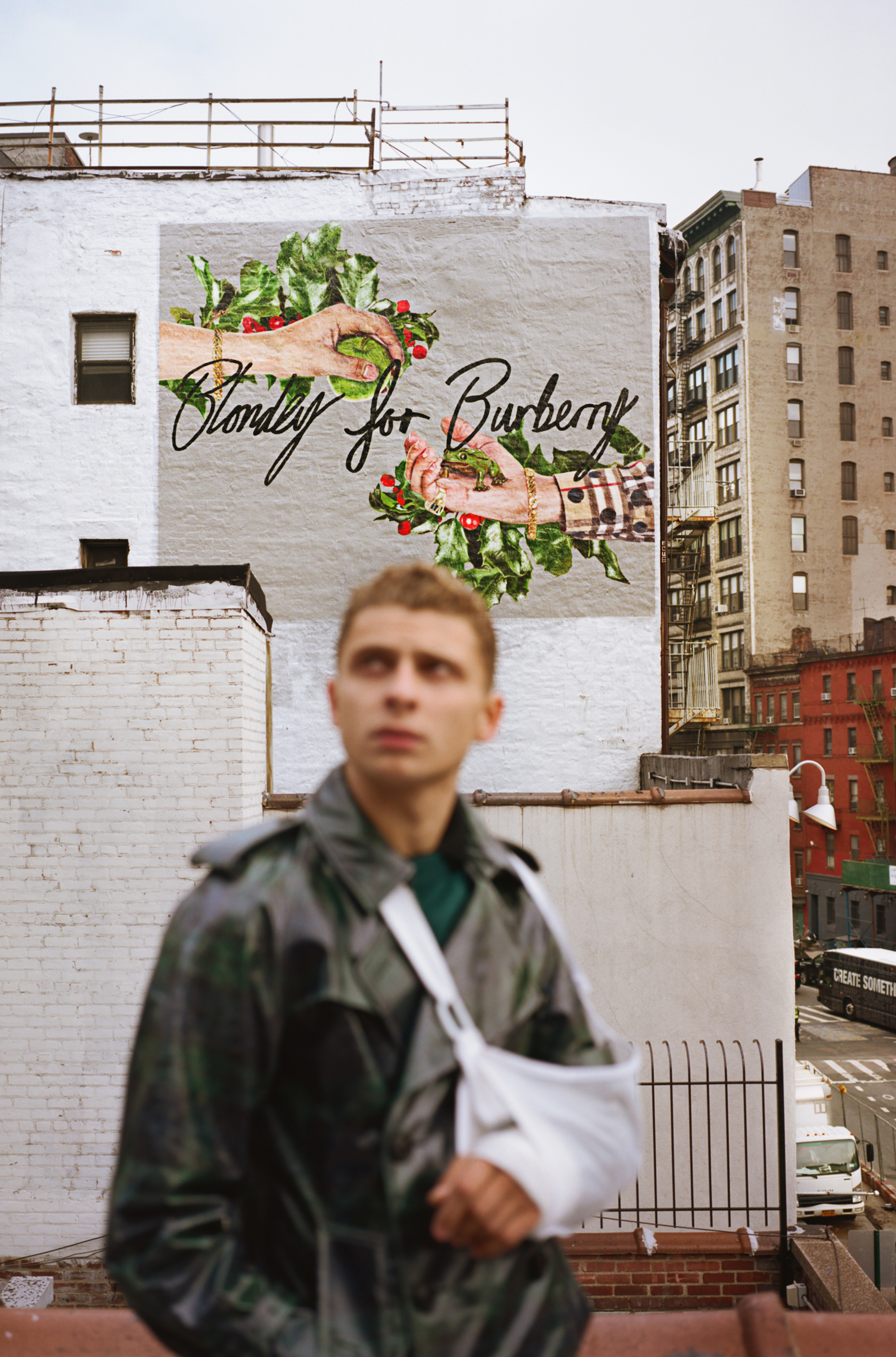 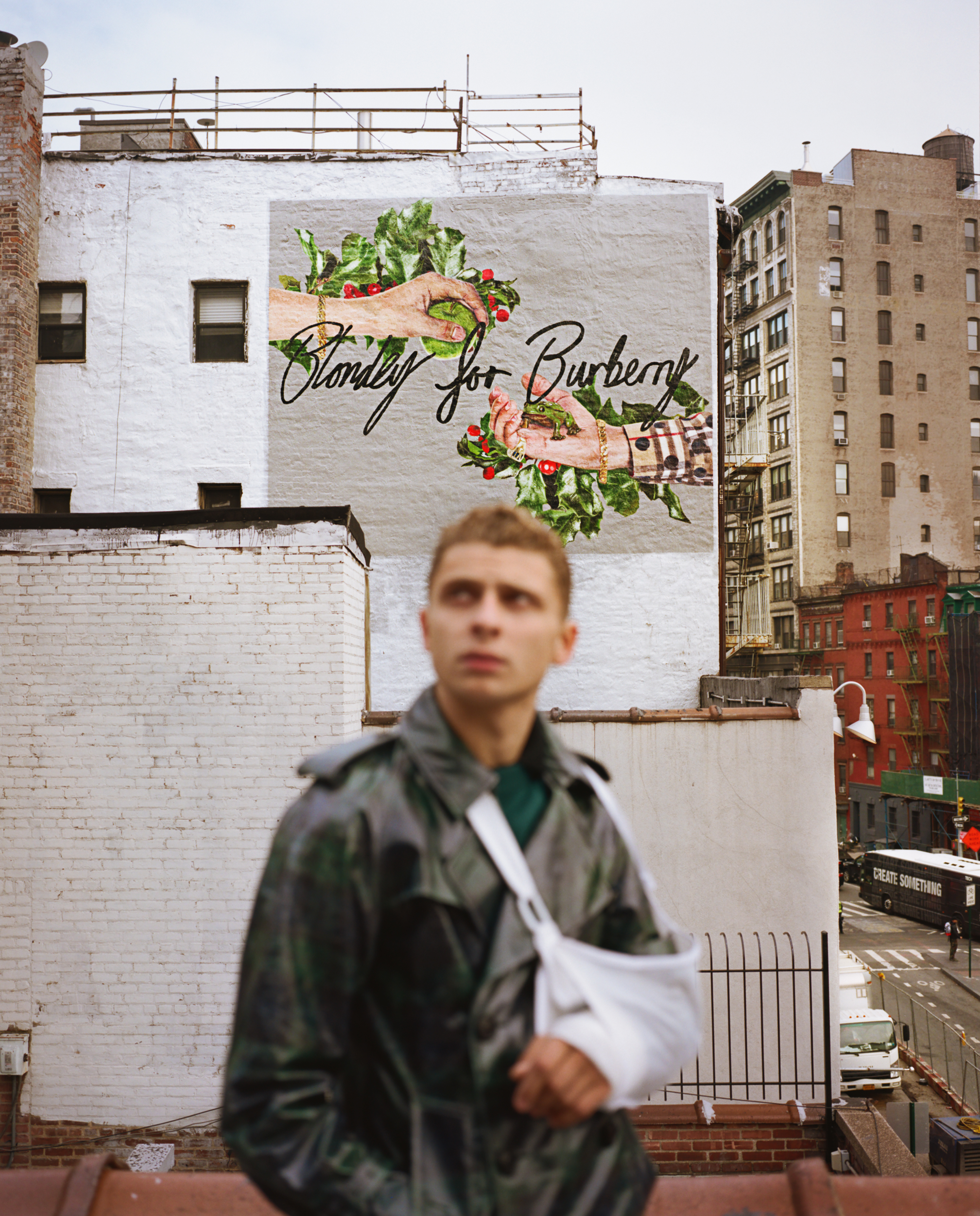 The murals mark the first time Blondey’s work will be showcased in New York and include his largest artwork to date.

The three murals are inspired by the dichotomy of modern life and the traditions of the holiday season and feature Blondey’s signature mix of eclectic imagery and striking motifs alongside references to Burberry and British culture.

This collaboration marks the evolution of the relationship between Burberry and Blondey, who most recently appeared in a portfolio of images for the brand captured by British photographer Alasdair McLellan. In September 2017, Blondey created an artwork for Burberry on the largest paintable wall in London, situated near the brand’s show venue in Clerkenwell.

“Blondey is an extraordinary talent and I am blown away by the incredible artworks he has created for us in New York. The passion, energy and skill that go into everything he does are remarkable and his approach to design, from inception to the techniques he uses to bring them to life, transcends his years…He truly is one in a million, and I am so proud to be collaborating with him on this very special project.”  — Christopher Bailey.

“Christopher and I have kept in constant contact since our first mural in Clerkenwell, whose short but sweet lifespan
only made it more pressing that we work together again. We decided to do three more, centred around the holiday
season in New York, which is quite fitting as my favourite Christmas song is “Fairytale of New York”. Over the last couple of years I have been collecting antiques and objects, some more sentimental than others, and incorporating
these into my works. These new murals are a composition, a curation of some of these objects that sit aside references to Burberry and British culture.” — Blondey McCoy 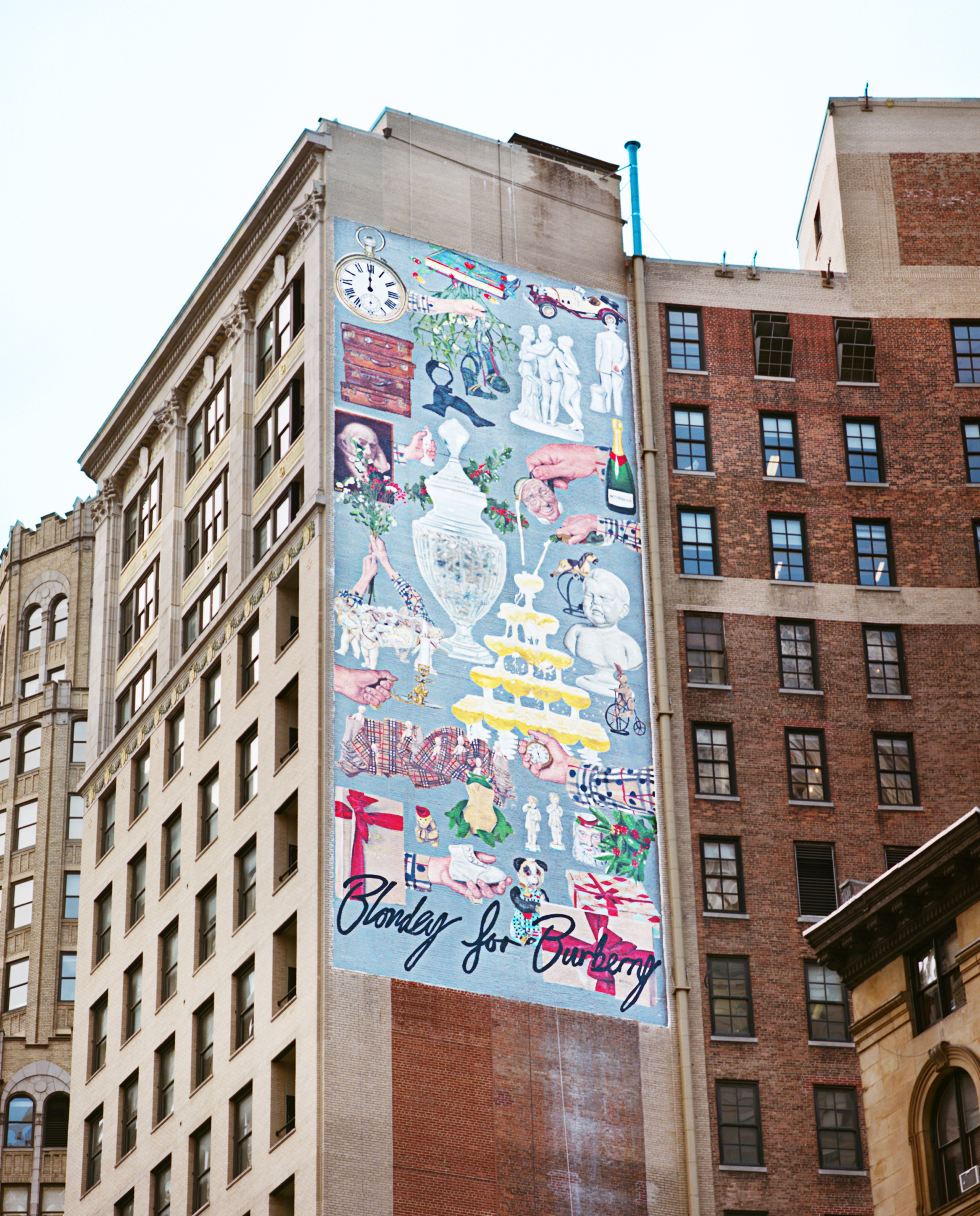 Spanning over 80ft, the mural tells the story of a British Christmas Eve party. Beginning with the
chime of the clock at midnight signalling the start of Christmas, the mural cascades down the wall with traditional holiday references including mistletoe, holly and Champagne, ending with children tucked up in a bed fashioned from a Burberry Vintage check scarf and presents waiting to be unwrapped. 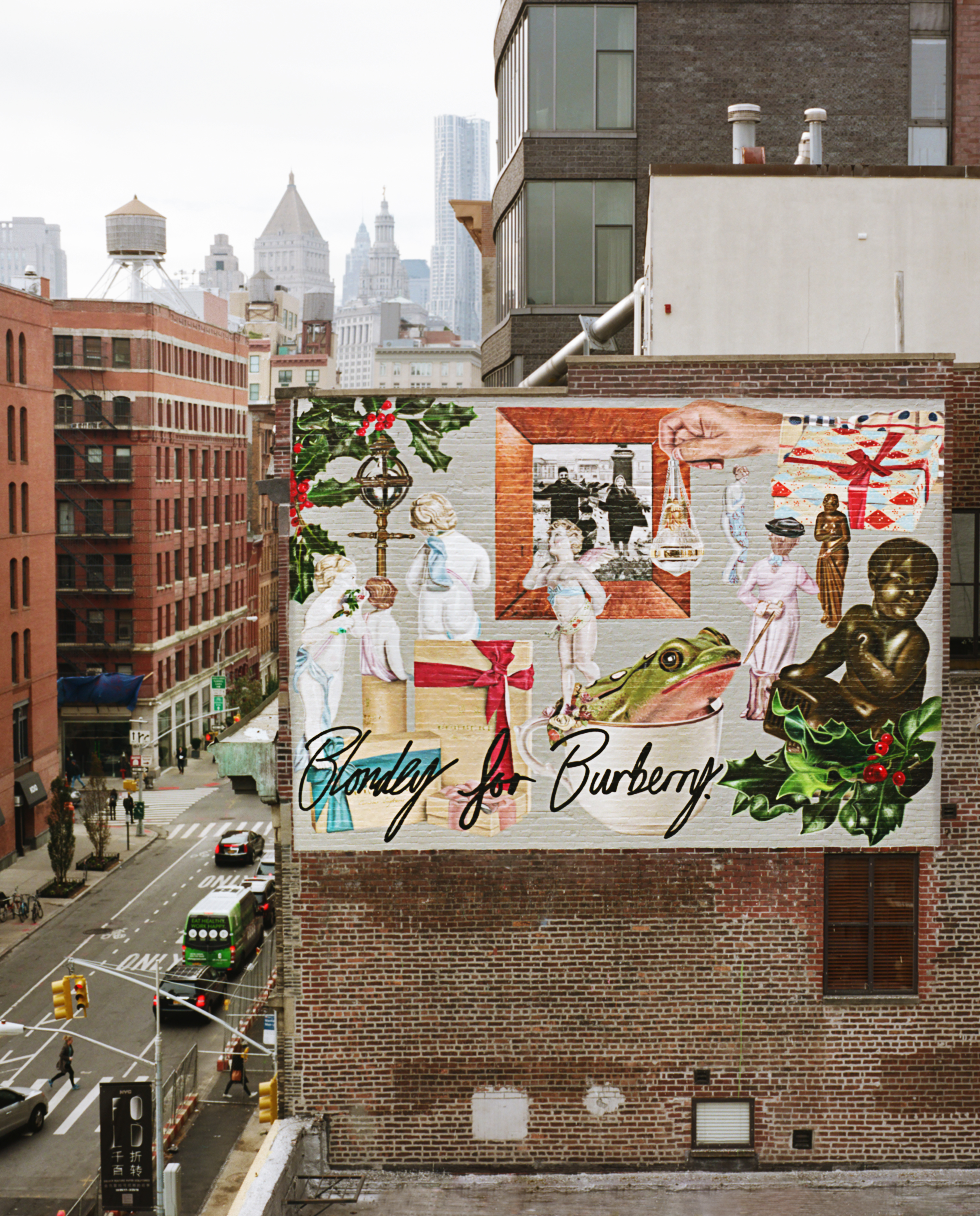 The 17ft mural illustrates the importance of family during the holiday season, portraying three figures exchanging gifts alongside a personal photograph of Blondey’s family. 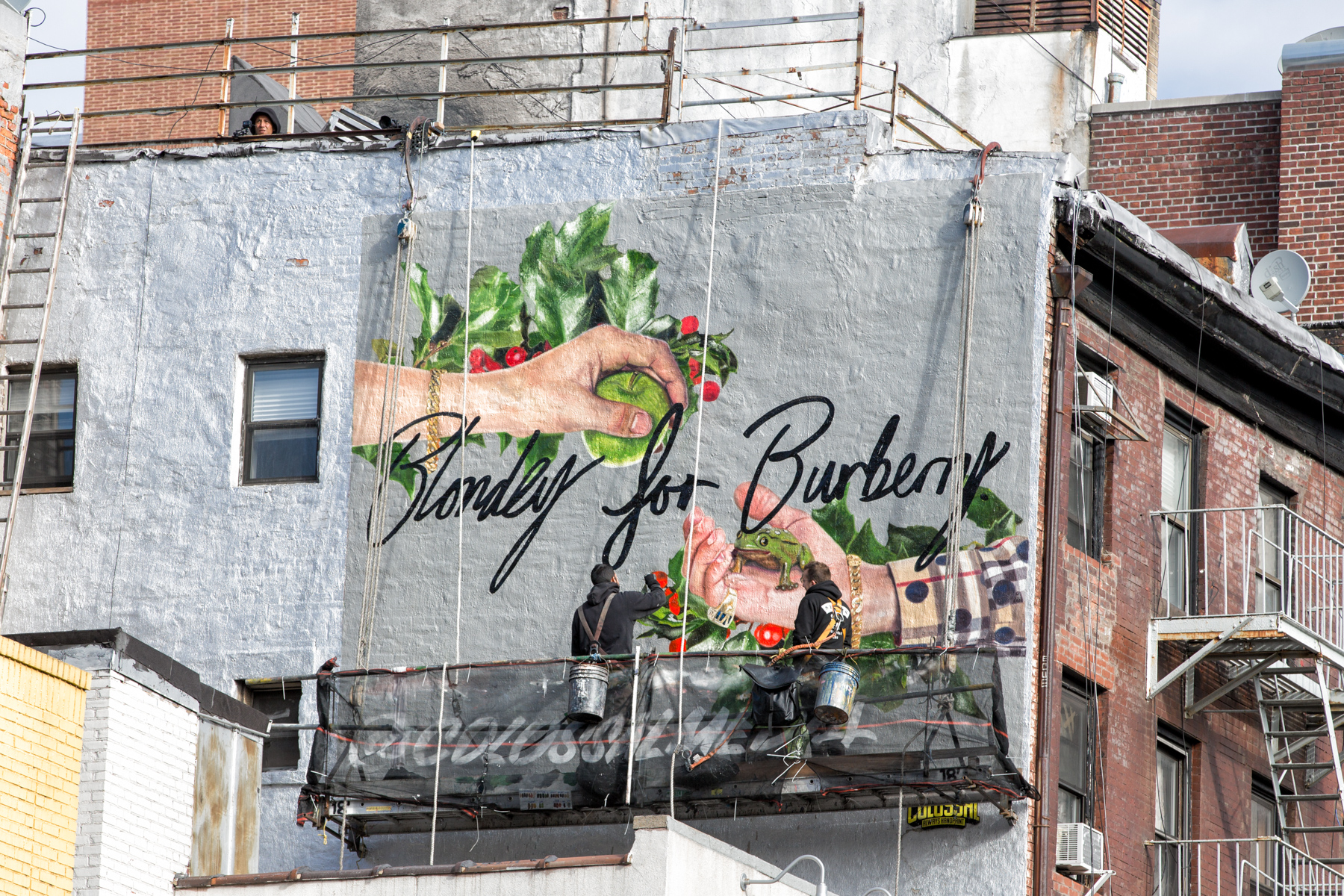 All three murals will be up until the end of December 2017.