When, in April of this year, Louis Vuitton presented the first collaboration with Jeff Koons that saw a selection of its most beloved handbags styles printed with some of the art’s most iconic images, it went down with resounding success! This month the second collaborations is ready to come and take its place in the market.

In fact, so quickly did the first Mastered series earn cult coverability that today they have announced a second edition, starring the likes of Monet, Turner, and Gauguin. In an industry that so often seeks to surreptitiously align itself with the art world, there is something brilliantly explicit about simply printing luxury handbags with reproductions of history’s most revered paintings.

“Some people will probably think it’s too commercial, that serious artists shouldn’t make handbags. But I also think a lot of people will really dig them. They are extremely marketable.” Mr. Burke said. “All of the paintings I chose factor into the canon of Western art history, but the whole series can be thought of as my own artistic DNA. They are works that have always been vital to me. 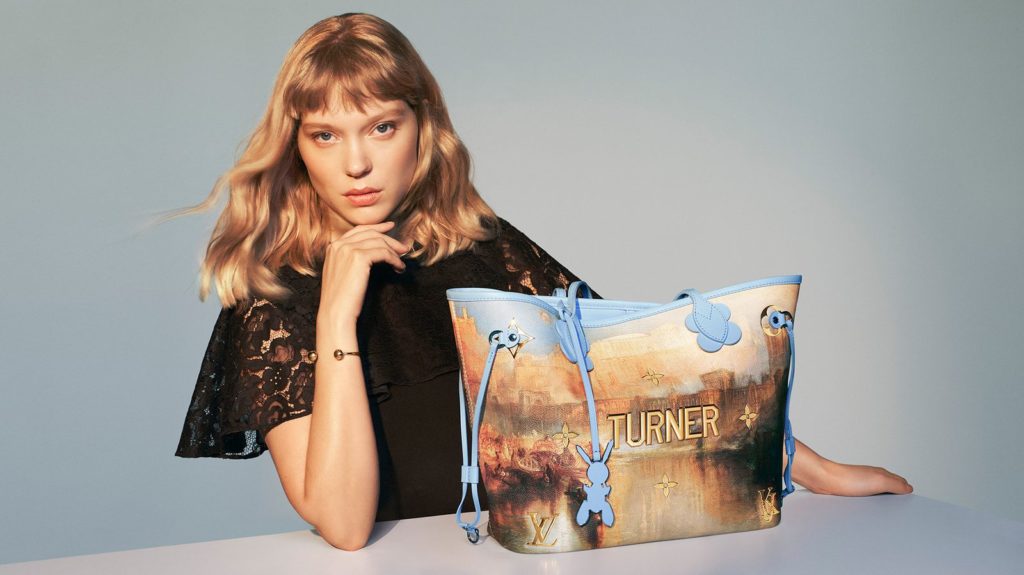 These are Old Masters rooted in our cultural consciousness, just as Louis Vuitton itself is, and it’s quite remarkable to see them refigured in a newly consumable context.

It’s sort of hard to choose a favorite – Monet’s Luncheon On The Gras is appealing for the controversy it wrought on Nineteenth-Century Parisian salons (image how they’d feel about a handbag); Turner’s vision of Ancient Rome speaks to our British patriotism. But, if you forced our hand, it would be towards the Monet: the famous water lilies anf reflective metallic letters printed upon s Neo Neu tote is a way different level of kitchsy chic. 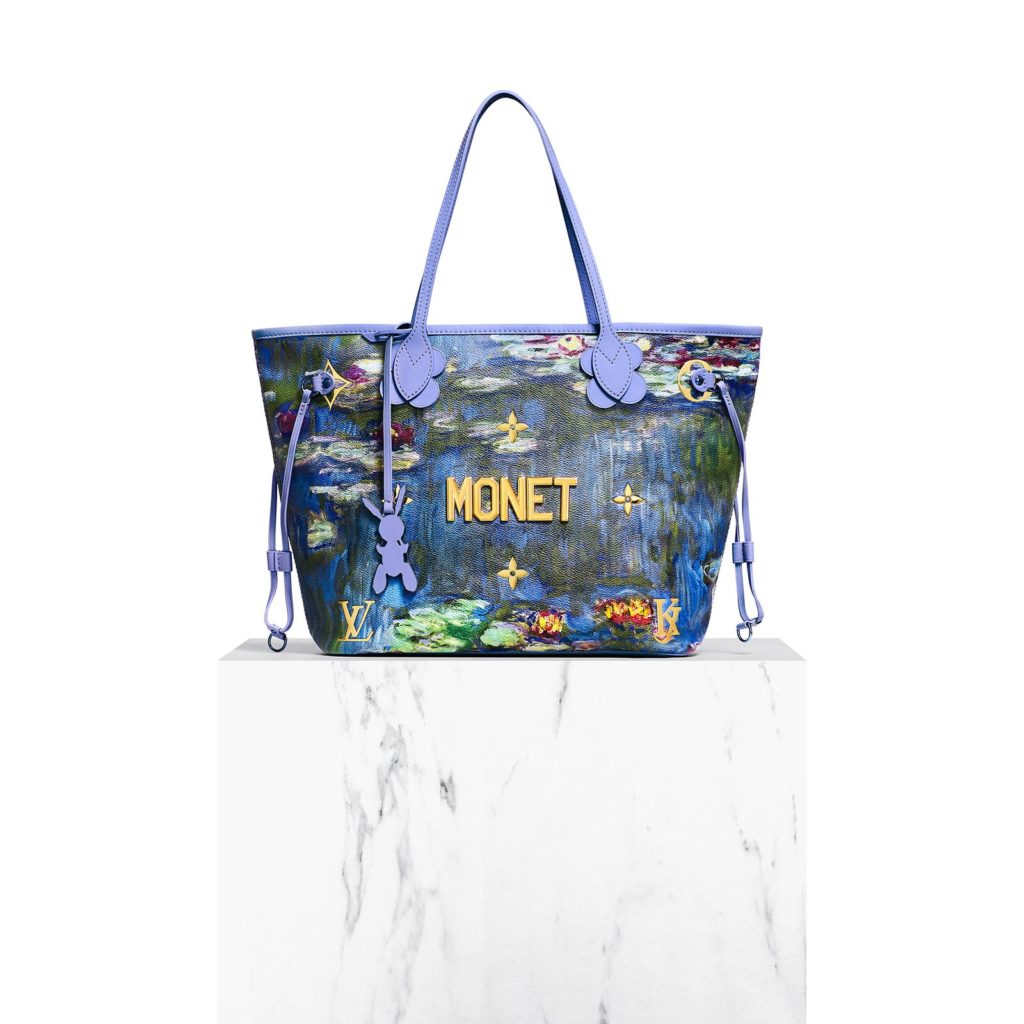 As with the first chapter of the Masters collection, Jeff Koons has modified the famous Louis Vuitton Monogram motif with its initials. This represents a radical change of course for the Maison, who previously did not allow to change the iconic pattern. For this collection Louis Vuitton presented new metalic elements which will be placed with Jeff Koons initials outside of the bag. 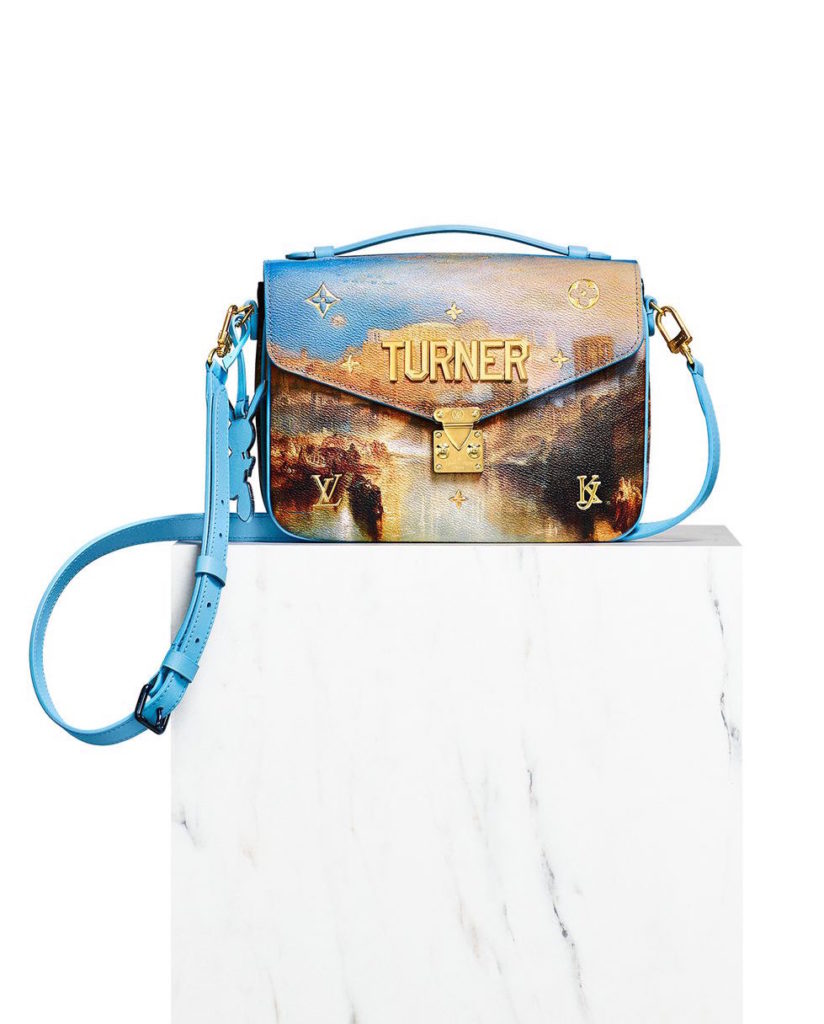 During the interview with Harper Baazar Jeff Koons said: “I was really thinking about images that would create a balanced dialogue, so I would take one image that was more sensual, like Boucher’s Reclining Girl, but then, in the same series, you have Monet’s Water Lilies. The bags function in a similar way to my “Gazing Ball” series. On one hand, you may think it’s one of my artworks, so there is a certain symbolism present, like the interplay between the LV and JK initials and the presence of my Rabbit,” (each bag is adorned with a leather tag in the shape of a rabbit, a reference to Koons’s stainless steel sculpture from 1986). “On the other hand, all of this takes place within a very minimal format, to stress that this is not about me. It is not about my creation; it is an exercise in experiencing humanism, being in touch with your own humanity. It is about giving it all up to the artists featured on the bag, whether it’s van Gogh, Gauguin, Monet, or Turner. On the inside of each bag you’ll find a biography of the artist, and a short biography of mine printed on the leather. The interior presents a portrait of every artist in the series, while mine is just the Rabbit. So the whole experience is focused on the artist, the bag, and what it represents.” 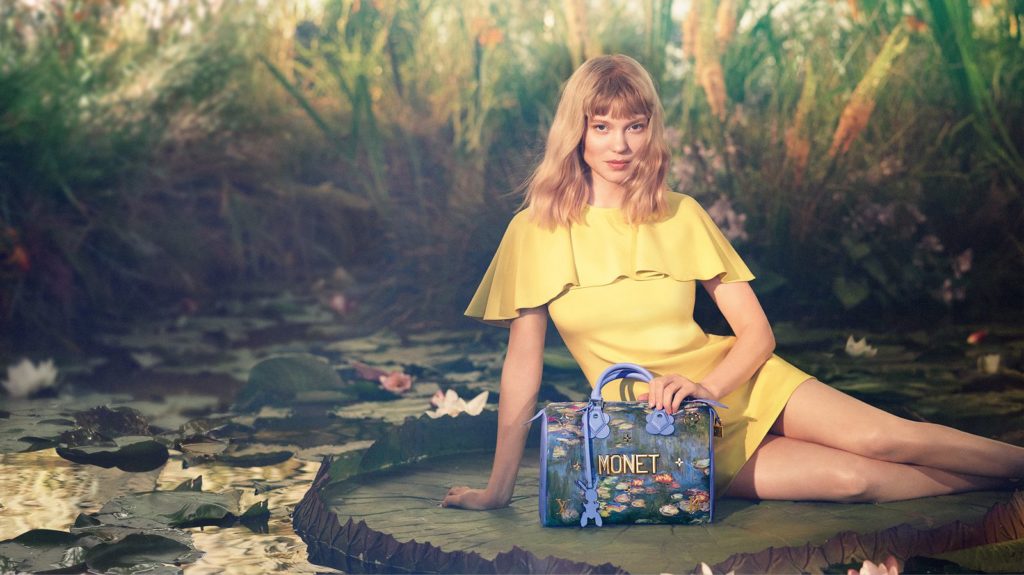 In recent years, Louis Vuitton has affirmed his commitment to the art world through a series of cutting-edge collaborations with the most influential artists of our times: Stephen Sprouse, Takashi Murakami, Richard Prince, Yayoi Kusama, Cindy Sherman, James Turrell, Olafur Eliasson and Daniel Buren have worked with Louis Vuitton on commissioned artworks, new product development, and fashion show, amplifying Maison’s role as patron and curator in creating new ways to make life art to the public. The relationship between Louis Vuitton and art has culminated in 2014 with the opening of the Fondation Louis Vuitton in Paris, a peculiar art museum designed by Frank Gehry. The second set of Jeff Koons’ Masters Collection is based on this rooted concept of exploring the intersection between fashion and art.

“I’ve been dealing with this series of work recently called “Gazing Gold Paintings”. What are these series really about? Is how to have appreciation for things that came before, those things that are outside itself. You are able to have a larger life with more breath to it,“ Jeff Koons said.