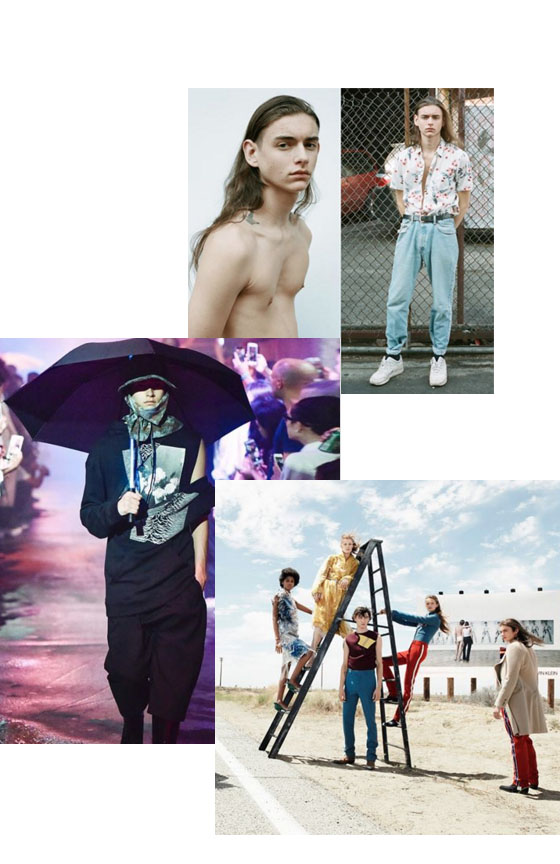 Back in February Raf Simons debuted his first men’s and women’s collection for Calvin Klein but the clothes weren’t the only thing that asserted Simons vision for the brand. The 205W39NYC Fall 2017 campaign introduced the world to a fresh lineup of models for whom this show  was a debut. One of them – cashier turned top model Dylan Christensen.

Christensen caught the eye of casting director Ashley Brokaw whch brought him to the list of new generation of Simons-approved muses as Lulu, who has quickly gone from unknown to a regular figure in the images of Vanderperre and Steven Meisel, Angolan show exclusive Blesnya Minher or freckle-faced Texan Sara Grace Wallerstedt.

The 18-year-old Long Islander Christensen was selling pieces from Chanel, Céline, and Saint Laurent in vintage department of  Century 21’s Manhattan flagship ant at the moment when he was about to spend the last his moneys he was approached by a scout.

For Vogue he told that he never considered being in front of the camera until “Before this happened, I was trying to figure out how I was going to make my way into this industry, and then it just popped up into my life. Perfect timing.”

“The night before, at the fitting, I just thought it was another casting. I didn’t even know what a fitting was,” he admits. Though his unfamiliarity with modeling’s routines caused some initial awkwardness. He told that the first time he met Raf, he didn’t know who he was—“I knew his name, of course, and his work, but I had never seen him.”

By the time Christensen walked his second show for Simons during the menswear season, though, he was a pro.

With two big shows and a campaign under his belt, Christensen is a rising star, but he’s planning to be in the business for the long haul.

For Vogue he explained that there are a lot of things that he wants to do in fashion industry, and out of it, but for him one of the biggest things is styling.