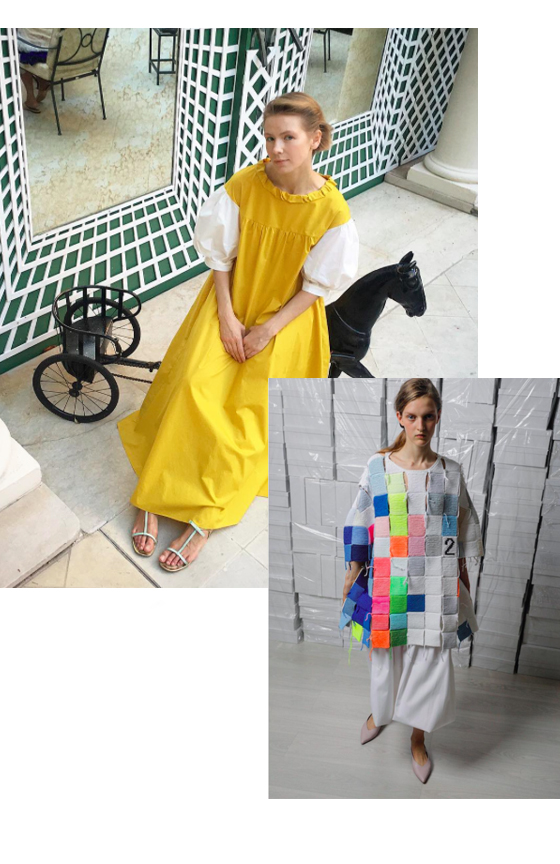 Everyone, especially the creators are responsible for how and what they do. Even today when social media beats all the news so fast you have to be really careful and ready for any feedback! It is happening all the time when some designer trying to recreate artist’s work, big brands ideas, style, and collection. Some of them are obsessed with repurposing the old collections into “something new”!

At that moment be ready that fashion world just wouldn’t allow you to sleep well!

The instagram account @dietprada is working as a spy on designer’s plagiarism and it is getting bigger and bigger every day.

The @dietprada account creator during the interview with i-D magazine said, “I don’t care if someone copies a Balenciaga jacket from the 50s. It’s like, so what? That’s fair game. But when you copy Balenciaga’s men’s suits from last season… There’s just this trend, trend, trend thing that’s making everything really homogenous.”

Just after Russian designer Vika Gazinskaya published her Spring/Summer 2018 collection, fashion lovers noticed that a few looks were hardly copied from the work of American artist Brad Troemel. It happened without any permission or arrangement.

The looks designed by Gazinskaya (who has been at the helm of her Moscow-based namesake line since 2006) allegedly lift not only the aesthetic of the work in “Freecaching,” but also, at times, the precise design scheme—the dresses consist of grids with colored blocks, white blocks, numbered blocks, and blocks of text. Sometimes, the arrangement is nearly identical.

Art and fashion world noticed that immediately. After that Brad Troemel made his announcement on his instagram account: “Lol if you’re going to go through the trouble to shout out a choreographer you might as well acknowledge what you actually copied ya goof. These go for $1500 a pop so DM me to get the address you can send the check to.”

Vika Gazinskaya responded immediately saying: “Actually, it is too obvious to “hide” it. So, it is an inspiration.” It seems as plagiarism’s confirmation and actually that she is completely fine doing that.

Hovewer Brad Troemel didn’t take it easy and published a screenshot of her statement where Russian designer admitted the “inspiration”. “If my work was an inspiration as you say, you probably would’ve mentioned me as an inspiration when asked what influenced your line in Vogue. Instead, you covered it up, thinking your world was so large and mine so small that you could get away with ripping me off without anyone noticing. You are an international fashion brand selling goods that are direct copies of my work for thousands of dollars. I’m a working artist trying to figure out how to pay my rent next month. This is not a horizontal relationship of influence. Ironically, the work you copied came from an exhibition about the financial difficulty of being an artist in NY, to the extent that I lost my studio and buried all of my art in Central Park as a makeshift storage unit– but you probably already know this considering how well acquainted you are with the series lol.”

Grazinskaya jumped into the fray immediately after, saying that she had seen the picture of Troemel’s work in “Freecaching” while making the line and even went so far to share that image with Amy Verner, the fashion critic who wrote the story for Vogue—but didn’t know the name of the person who created it. She also alluded to a note she had sent Troemel, and added that she will retroactively credit him as an inspiration source.

“I wrote u that I had no idea who u are and never hidden the picture which inspired me,” Gazinskaya said. “I were showing it to buyers and Amy. But we both did not know. I wrote u this, saying that we will add the ‘inspiration’ being u. Since now I figured out your name. But u prefers to stay angry – I thought artists are more kind and spiritual.”

Anyways there were few more announcements from the both sides. However, at the end the situation became a bit absurd – Brad Troemel practice also has dissected and sent up issues of ownership and appropriation, fashion and retail, social media and all digital influence. Let’s be honest, bad advertising still works perfectly.